Coronavirus information
The Zero Canada Project provides resources to help you make the most of staying home.
Visit the hub
Vancouver
The Canadian Press
Published July 14, 2020 Updated July 14, 2020
Comments
Please log in to listen to this story. Also available in French and Mandarin. Log In Create Free Account

A relative newcomer to the Vancouver Canucks, Tyler Toffoli will be counted on to bring playoff experience to the team’s talented but young core.

A veteran of 47 NHL playoff games with the Los Angeles Kings, including a run to a Stanley Cup title in 2014, Toffoli played just 10 games with the Canucks before the league suspended its season March 12 because of the COVID-19 pandemic. In that small sample size of games, however, he put up 10 points and formed a potent line with J.T. Miller and Elias Pettersson.

Now, after a long hiatus, a player still getting to know his teammates will be helping to lead his club into a best-of-five playoff qualifying series with the Minnesota Wild next month in Edmonton. But Miller believes the added postseason knowledge the Canucks received when they acquired Toffoli in a Feb. 17 trade with the Kings will pay dividends.

“He’s super valuable,” Miller said of the former Ottawa 67’s junior star. “He brings a lot of great qualities to a really good team. He’s definitely a piece I think our team needed. A guy who knows his role. He knows what he does well and he sticks to that.”

“Since he’s been here I think it’s been a really good fit,” Miller added. “I’m good friends with him now, too, so it’s good we have good chemistry on and off the ice. Really looking forward to playing in some big-time games with him. Obviously he’s had a ton of success and a lot of experience, so it’s exciting.”

While the Canucks have other players with postseason experience, their core is largely new to the rigours of the gruelling path to the Stanley Cup final. Team captain Bo Horvat has six playoff games under his belt, while fellow young stars Pettersson, Brock Boeser and Quinn Hughes have none.

Playoff experience does not end with the Canucks’ youth. Thirty-year-old starting goaltender Jacob Markstrom also has yet to make a postseason appearance.

Toffoli’s advice to them is to stay grounded.

“I think the thing that I learned is don’t get too high up and don’t get too low,” Toffoli said. “Because one shift you’ll score and you’ll stay on the ice and they come back and score right away.

“You’ve just got to stay even keel. That sounds super cliche, but honestly that’s just the way it is.”

Miller, who has appeared in 58 playoff games with the New York Rangers and Tampa Bay Lightning, said some players pick up the demanding postseason game quicker than others. He said he is looking forward to being a resource.

“I haven’t been the player I wanted to be in my previous playoff history,” Miller said. “I think that’s going to come.

“It’s really exciting now that I can share to the younger group, and even some of the guys that aren’t that young but just haven’t been on a playoff team yet, what to expect.”

The 2019-20 season has been bizarre for all NHL players, but perhaps more so for Toffoli. Before the pandemic caused chaos with the campaign, Toffoli was traded by the only team he had played for, two days after becoming the first player to score an outdoor hat trick at the Air Force Academy in Colorado against the Avalanche.

“Obviously it was my first experience being traded,” he said. “But I knew once I got here I talked to Greener [head coach Travis Green] first day and he told me, ‘Just play your game. Just work hard and read off J.T. and Petey.’ ”

Toffoli said he’s happy to get back to practice with the Canucks, but he is more interested right now in getting to know his teammates better.

“I think honestly most of it is off the ice and being able to know more about the guys and those little things,” he said. “That goes a lot further than on the ice to be honest.” 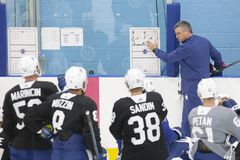