For the better part of three years, NFL commissioner Roger Goodell tried to have it both ways when it came to Colin Kaepernick.

Goodell would not precisely endorse Kaepernick’s kneeling protest during the U.S. national anthem, nor would he exactly condemn it. Instead, he leaned hard into the on-the-other-hand’ism. Literally.

“I support our players when they want to see change in society,” Goodell said shortly after Kaepernick started kneeling in 2016. “On the other hand, we believe very strongly in patriotism in the NFL.”

If you inspect that statement, you see the difference between what Goodell seems to want to say (“I support …”) and what he knows he is expected to say (“We believe …”).

When NFL owners blacklisted Kaepernick, Goodell was the person who had to wear that decision. He never could manage to fit himself into it. In fairness, how could he? It’s difficult to repeatedly defend a position you cannot admit has been taken.

Watching Goodell flail about in news conferences and on TV, you almost started to feel sorry for the guy. Then you remembered that he gets paid about US$30-million, and you felt less sorry.

At the weekend, with the United States in tumult over the very thing Kaepernick was protesting, Goodell tried surrendering. He couldn’t manage that straightforwardly, either.

Goodell’s apology came in a statement from what looks to be his boathouse. I spent most of the video fixating on the ornate walls behind him and thinking, “Is that oak?”

He dressed in a sweatshirt, which I suppose is meant to convey homeyness or a new, relaxed attitude or something.

Remember how his strong belief in patriotism precluded kneeling before the Stars and Stripes? Well, not so much any more.

“We, the National Football League, admit we were wrong for not listening to NFL players earlier, and encourage all to speak out and peacefully protest,” Goodell said.

When Goodell says “NFL players” he is, of course, speaking about one particular NFL player. But he could not bring himself to say Kaepernick’s name. That would create too great an expectation that Kaepernick will be rehired.

As such, the apology – if that’s what this qualifies as – has little moral force. The result is an after-the-fact equivalent of a “thoughts and prayers.”

“I personally protest with you,” Goodell continues. “And want to be part of the much needed change in this country.”

Whatever that means. Goodell out on the streets with his fist in the air makes about as much sense as Louis XVI inviting the Parisien rabble into his bed chamber. When people talk about systemic change, it’s the Goodells of the world they intend on changing.

In essence, this is the NFL’s declaration that it would like to switch sides in the culture wars. From now on, it is with the resistance.

(It’s yet to be determined if the resistance will have the NFL.)

If anybody’s taking the loss here, it isn’t Goodell. He’s been moving around the ring trying to slide into the winner’s corner for his entire career. This is another example of why he’s good at it.

It’s not exactly a victory for Kaepernick, either, in as much as he’d already won. That happened nearly two years ago when Nike created the “Believe in Something” ad campaign around him.

Nike made its billions by trending just ahead of popular culture. Endorsing Kaepernick was a bet against the influence of football. That bet just paid off.

Kaepernick doesn’t need to play the sport any more in order to get his points across. He’s built his own platform. Nike put up the bunting.

There doesn’t seem to be much point in returning to the NFL. Why would he want to be a second-string quarterback now, after all that’s happened?

The likeliest scenario here is that Kaepernick remains a full-time activist/shoe salesman, while Goodell takes 50 or 60 more tries at saying “Sorry.” The NFL as an institution will move forward because a) too many people make too much money off it and b) what else are you going to do with your Sundays?

The only person substantively injured by Goodell’s change of mind is U.S. President Donald Trump.

Football was Trump’s only safe harbour in the popular culture. It was the one milieu he would regularly risk presenting himself publicly, and have the expectation of a warm reception. Trump is not unlike Richard Nixon in that way, as well as a few others.

Kaepernick’s kneeling protest gave Trump an excuse to wrap himself in the flag when he was still campaigning for the White House. He’s ret​urned to it repeatedly over the years.

He tried it on again last week – “There are other things you can protest, but not our Great American flag – NO KNEELING!”

Goodell’s statement came out a few hours later. This was the NFL telling Trump that while it still likes him as a tax cutter, it wants to start seeing people of other political persuasions.

As nearly all high-profile athletes turned on Trump, he could always point over to football and say, “Those guys still like me.” If you had a nickel for every time Trump name-checked his golfing buddies Tom Brady and Bill Belichick, you’d have a bunch of nickels. Wisely, Brady and Belichick avoided publicly returning those salutations.

That tentative amity is over now. The NFL has figured it’s better to upset a few Red State customers than it is to go to war with its own work force. Football just crossed the lines.

This feels important, though I don’t suppose we’ll know how important until November. It’s possible that in a few years time, we may be adding a new superlative to Kaepernick’s CV: “Fought City Hall. Won. In the process, helped take down the mayor.” 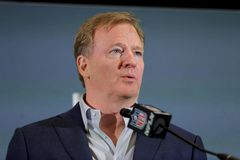 More than half of NFL coaching staffs not at team facilities
June 5, 2020 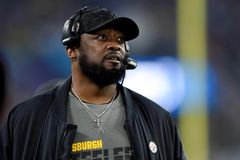 Opinion
Pro athletes eager to be on right side of history join race protests
June 1, 2020 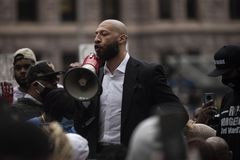