A sevens season that started in turmoil will end in uncertainty and a search for a new coach after Rugby Canada fired Damian McGrath on Friday.

The Canadian men currently stand 12th in the HSBC World Rugby Sevens Series with two tournaments remaining. The season followed a labour dispute between the players and Rugby Canada that cost the team two months of its pre-season.

An uneasy peace followed but the players are continuing their bid for union certification, something Rugby Canada opposes although it says it is open to dealing with a less formal players’ association.

Henry Paul, an assistant coach with the Canadian men’s 15s team and former England sevens player, has been named interim sevens coach. He will lead the team at a North American Olympic qualifying tournament in July in the Cayman Islands with a permanent coach to be named later.

“We know this team can be regularly in the quarterfinals and challenging for a podium position at every World Rugby Sevens Series stop,” Vansen said in an interview. “That’s not where our team performance has been, in particular, the last two years. It’s been going in the reverse of that.”

The 61-year-old McGrath declined comment. But it appears the axe took him by surprise. Co-captain Harry Jones also demurred, saying he wanted time to digest the news.

The veteran English coach was hired in October 2016, succeeding Zimbabwe’s Liam Middleton, whose contract was not renewed after Canada failed to qualify for the Rio Olympics.

On their day, the Canadian men have proved they can beat anyone.

McGrath led Canada to the tournament title in Singapore in 2017, the first Cup win in the Canadian men’s 140th event on the circuit.

But signature wins have been few and far between in the increasingly competitive World Series. Depth has been an issue for the Canadian men, although McGrath has added youth to the program, with Rugby Canada scrambling to maintain funding.

Canada finished 11th last time out in Singapore in April, after a 15th-place result in Hong Kong that McGrath called “without doubt the worst tournament we’ve played since I began coaching Canada 7s.”

“We started well but got steadily worse as we went on. Our lack of pre-season caught up with us but there are no excuses,” he wrote on Twitter.

Canada was 10th in Vancouver in March, missing out on the elite Cup quarterfinals on point difference despite upsetting Olympic champion Fiji.

Prior to Vancouver, the Canadians finished 13th in Las Vegas, tied for 11th in Dubai, Cape Town and Sydney and tied for seventh in Hamilton, where they made the Cup quarterfinals.

Ironically, Canada is well positioned to make the 2020 Games in Tokyo, given it will not have to get past the U.S. in the regional qualifier as it did last time out. The top four finishers on the World Series circuit secure automatic Olympic qualification and the Americans currently top the standings.

Vansen, however, argues that Olympic qualification is not enough. “We want to go to the Olympic Games and compete for a medal,” he said.

The Canadian women won bronze in Rio and are on track for automatic qualification for Tokyo.

McGrath was fired by Samoa after the Pacific Islanders fell just short of qualifying for the 2016 Rio Olympics, losing 22-19 to Spain on a late try in the final of the Olympic repechage tournament in June 2016. Canada lost to Russia in the quarterfinals of that same tournament.

Failure to make the Rio Games cost the Canadian men dearly with Own The Podium pulling its funding. The men’s sevens team, which had received $850,000 in OTP-recommended money in 2016-17, got nothing in 2017-18.

Rugby Canada appealed and got a small portion of the funding back. Vansen says it is getting some $120,000 in OTP funding for fiscal 2019-20.

The cuts resulted in the departure of strength and conditioning coach Lee Douglas, although Vansen say others in the program have taken up the slack. The funding cuts also meant the Canadian men were unable to arrive earlier at tournaments so as to have more time to adjust to time zones and jet lag.

While Vansen says Rugby Canada has reallocated resources to try to make up the shortfall, McGrath regularly lamented not being able to regularly have developmental teams tour, a factor he believes restricted the depth in the Canadian program.

The labour dispute arose because the sevens players were upset at their contract offers and concerned that Rugby Canada’s revamped centralization program was weighted in favour of the 15s team.

While McGrath remained neutral, his allegiance was to the sevens side of the game.

With some 50 Canadian 15s players now contracted to Major League Rugby teams, Rugby Canada has since reorganized the centralization program again. It has revived the Pacific Pride, a national high-performance men’s academy program for players between the ages of 18 and 24. Sevens team players continue to be part of the centralized program in Langford, B.C.

Also Friday, Rugby Canada announced the formation of a performance leadership group responsible for high-performance operations of all of its national teams.

McGrath was the odd man out. 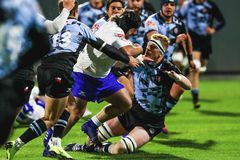 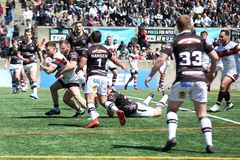 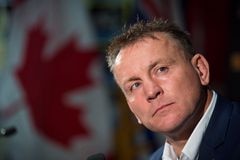