Although the Toronto Arrows may have stumbled out of the Major League Rugby gate, starting 1-3 while acclimating to their home away from home in Atlanta, they are not the only facet of Canadian rugby adapting to an itinerant lifestyle.

The men’s national team coach, Kingsley Jones, is in the midst of a three-week whistlestop tour of the United States – probably not a bad thing given the COVID-19 situation in the West Coast province he calls home – checking in on 60-odd Canadian players dispersed across the country.

He’ll be in Georgia on Saturday as the Arrows play host to the Seattle Seawolves, before heading up to New York for another game Sunday, and then finally starting the journey home to Vancouver. It’s a lot of hard miles for a man who hasn’t taken charge of a game since October, 2019, when the Canadian men wrapped up a disappointing Rugby World Cup with a 66-7 loss to South Africa.

But the former Welsh international is happy to put a positive spin on his travels, particularly in a year that should, COVID permitting, feature a match against England in the summer, before a two-legged World Cup qualification series in September against the United States. And few things bring him more joy than the continued development of MLR, a 12-team league that is in its fourth season – or third, according to Jones, who refuses to count last year’s season that was cancelled after just five games.

“I’ll be honest with you, the MLR has saved Canada and the USA,” he says. “[Both countries] have the potential to push on, but they’ll never push on without their domestic players playing and training in a daily training environment.

Given the lack of hands-on coaching time he is getting with his players – some of the squad assembled in Langford, B.C., last November for a three-week training camp – putting in some face time will have to do. However, there has been some knowledge sharing, with Canadian assistant Rob Howley pulling double coaching duty with both the men’s team and the Arrows, which have 30 Canadians in their first-team squad.

While providing access to top-level coaching – Howley was on the coaching staffs for both Wales and the British and Irish Lions for the best part of 10 years – is important to the development of Canadian rugby union, Jones is crossing his fingers it might give the team an edge come September.

“It is a point of difference,” he says. “I’m friends with [Team USA coach] Gary Gold and I know Gary would look at it and think, well, that’s a little advantage that we possibly have if we have a large number of players at one team [and] we’ve got that collaboration going on, so hopefully it’ll give us a slight edge.”

One of the recipients of that collaboration is Canada centre Ben LeSage. The Arrows co-captain was a member of the last World Cup squad, and was one of four Arrows in Canada’s starting lineup against Italy in its opening match. He anticipates that any synergy that Canadian internationals can get going during the MLR season will only help them hit the ground running when representing their country.

“I know there’s a core group of us here that hopefully will be involved with that team as well so if we can sort of build back and make up for the year of lost rugby and then start playing well as a team that’s just going to translate to the Canada stuff as well, so they really go hand in hand,” LeSage says.

And while that will obviously benefit the large contingent of Canadians with the Arrows, the same applies to the pockets of Canadians playing for other franchises. The Austin Gilgronis and Houston Sabercats have four Canadians each, while Saturday’s opponent Seattle leads the way for non-Canadian franchises with five.

LeSage shares the same sentiments as his national team coach when it comes to the arrival of MLR and how it can spur the development of North American rugby. With rugby union world powers such as England and Wales having just wrapped up their second Six Nations campaigns since Canada last played a competitive match, building chemistry within club teams can help the national team play catchup somewhat.

“I think that the sustained high-level rugby in between [international games] is the first big thing … but also that cohesion and terminology and familiarity with each other that comes with all playing for the same team,” the Calgary native says. “I think you kind of kick off those Canada camps at a higher starting point further along than you might otherwise be.”

With Canada currently riding an eight-game losing streak in test matches, any bit of an advantage is one that Jones and his players will happily grab. But before LeSage and Co. can thinking about getting their national team back to winning ways, they’ve got to take care of the Arrows first.

Last week’s 43-16 loss against the Los Angeles Giltinis was largely the result of playing a man short for an extended period, when prop Gaston Cortes was sent to the sin bin for a professional foul. The Giltinis racked up 21 points while the Arrows were shorthanded.

“I don’t think we’re hitting any panic buttons quite yet and mindful that it’s not a dire situation where everything needs fixing,” LeSage says. “It’s kind of tweak one or two things and we can be a better team.” 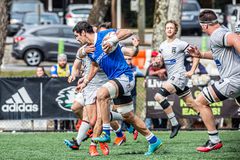 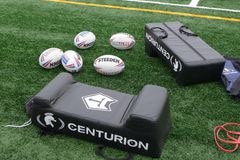 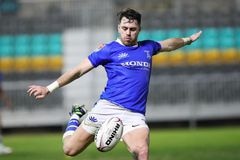