During a televised meeting at the Kremlin this past week, FIFA boss Gianni Infantino delivered a rapturous and occasionally bizarre soliloquy for his host.

The highlight was the obsequious Swiss telling Vladimir Putin: “The world has fallen in love with Russia.”

(Infantino also said, “the virus of football has entered into the bodies of each and every Russian citizen,” which is, I suppose, what happens when someone warns you, “whatever you do, don’t mention radiation poisoning.“)

While Infantino prattled on, the camera perched over his shoulder so that viewers got the full magnificence of Putin’s smug, Cheshire grin.

As it turns out, we don’t have to wait until Sunday to learn who won the World Cup. Putin did.

Infantino finished second, followed by whichever of France or Croatia gets its hands on the Jules Rimet Trophy.

In that sense, Russia 2018 was the looking-glass World Cup. Everything you expected to happen got turned upside-down.

Putin is the prime beneficiary. All it cost him were a few painful TV appearances, a couple of mealy-mouthed speeches and US$14-billion.

A month ago, he was widely perceived as a wax villain teleported in from a Flash Gordon serial. All he needed was the wispy moustache and a velour cape.

Now, like his favourite predecessor, he’s Uncle Vlad. He’s the guy who likes a little kickabout at the office; the one who lives and dies with the home team; the guy shaking everyone’s hand in the VIP box. This cheerful, clockwork World Cup gave Putin the veneer of relatability.

That benefit of the doubt was gradually extended from the man to his regime to the entire country and back around again.

“Many stereotypes about Russia have simply collapsed,” Putin told Infantino.

Nothing collapsed. Instead, we all agreed to like Russia once we were face-to-face with it, because manners matter more to most of us than principles. It’s hard to begrudge a person their faults when you’ve spent a month sponging off their hospitality.

Poisoned a few dissidents; hacked an election; invaded Country X? Well, okay, no problem, I get what you’re saying. However, the World Cup doesn’t stage itself and I didn’t have to pay anything to watch it so …

The most notable recent victim of our insidious need to be polite is Dutch soccer great Marco van Basten.

As a FIFA executive, van Basten was part of Infantino’s Kremlin delegation.

Putin remains high on the minds of the Dutch because of the downing of MH17, a passenger plane out of Amsterdam blown up by a Russian missile over Ukraine in 2014.

What, if anything, had van Basten said to Putin about that?

“I am aware of the fact that a lot of families in Holland, they have a problem with what happened with the airplane,” van Basten said afterward. “But this is another matter. I was just asked to come there and have a chat about football.”

You feel for van Basten here. What’s he supposed to do? Berate the leader of a foreign country on live television? Start pounding a desk, Al-Pacino-style?

It might delight some, but it wouldn’t solve anything.

What it does speak to are the ways in which sport is warped to advance a political end. All you have to do is be in the vicinity of the big game. Sport itself does all the work.

That’s contrary to the old Soviet model of success – our Supermen beat your Supermen.

Drugs and greed took the zing out of winning. People stopped believing Olympic gold equals cultural superiority. The new way of doing things is simpler – just pick up the bill.

The West had until recently got out of the event business. That left a void filled by the Putins of the world. They’re happy to bleed the public coffers for a global ego boost.

The check on this tendency was that it often didn’t work out: wildly over-budget; riots in the streets; or, the very worst, organizational failure and international ridicule.

Russia 2018 is the exception. Nothing went wrong. Even the greatest cynic must admit it was carried off brilliantly. On a competitive level, this was the finest world championship in two decades.

Putin soaked up the reflected credit. He’s bought himself a get-out-of-international-relations-jail-free card.

Now we wait to see if this was actually the exception as far as big sporting events go, or the revised rule. Which brings us to the man in second place – Infantino.

A couple of years ago, the World Cup was looking shaky. Nowhere near collapse, but not what it had been. Indictments were flying and advertisers were fleeing.

This tournament returned it to its full glory. It will encourage a new generation of autocrats to buy into FIFA’s stereotype-collapsing scheme.

Infantino is so emboldened that he chose Friday to announce the dates for Qatar 2022. It will be played from late-November to mid-December, causing massive disruption to the world’s biggest domestic leagues. Its infrastructure is being built by a workforce of quasi-slave labour.

But why would Infantino care? He’s used Russia 2018 to beat back his critics.

When he was asked a detailed question about how Putin has in turn used the tournament to triage his own image, Infantino was unruffled.

“Football cannot solve all the problems in the world,” he said, which wasn’t the question.

It might fairly be said that soccer has helped make a series of interconnected, complicated problems in and involving Russia even moreso. But did you see the end of that England game?!

As he keeps reminding people, Infantino’s business isn’t politics. (The unfinished half of that answer: Neither is his business sport. His business is business.)

FIFA got its cheques. The rest of us got our soccer. Everyone’s happy. That seems right and fair.

Until you ask yourself why the guy who paid for everything and won nothing looks even more delighted than we do. 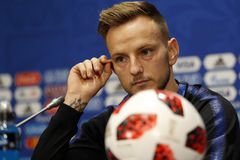 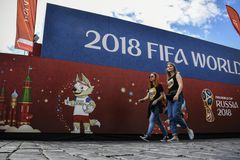 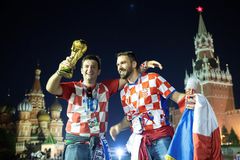