Brier rookies they may be, but Scott McDonald’s team vanquished big names and logged more games than any rink this season to get to the Canadian men’s curling championship.

McDonald, vice Jonathan Beuk and front end Wesley Forget and Scott Chadwick out of Kingston, Ont., have played 80 games this winter to quickly accumulate experience as a foursome.

They beat John Epping three times at Ontario provincials, including the final, as well as former Canadian and world champion Glenn Howard en route to booking their first berth at the Tim Hortons Brier.

There will be no easing into the tournament as McDonald faces defending champion Brad Gushue in their first game on Saturday at Westoba Place.

“I think I would place us in the dark-horse category,” McDonald said on Friday after a practice session.

“We’ve played a lot of the top teams and we’re competitive against the top teams. They know who we are and we know who they are. It’s just a matter of playing well in this environment.”

On Friday night, Brendan Bottcher’s Edmonton rink defeated Epping 8-4 in the wild-card game to qualify as the 16th team.

Trailing 7-4 after eight ends, Epping not only missed a tricky hit to score two, but gave up a steal of one.

Bottcher ran Epping out of rocks in the 10th end.

With curling now being dominated by a handful of teams, it’s a novelty when new faces appear among the elite.

McDonald pushed into the top-10 of the men’s World Curling Tour rankings earlier this month with a 54-26 record.

The skip says planning and building their inaugural season began in April, 2018, when the four men determined they could be a good fit.

“At the beginning of the year, our goal was to get to the Brier,” McDonald said. “It wasn’t to finish second or third [at provincials].

“I’d finished third last year. It’s not a fun position to be in. That was motivating in some respects.

“We put a lot of work in in the summer to make sure we were ready to compete come September.”

They played nine tour events their first two months together.

They went undefeated at Ontario provincials and thus feel battle-hardened heading into Brandon.

“It gave us some experience where we didn’t have before,” McDonald said. “We’d all played in big games in different capacities, but obviously the final to get to the Brier is the biggest game we’ve ever played in.

“We know we can come into a setting like this where the pressure is on and perform,” he continued. “That’s important for a team that doesn’t have as much experience as the top four or five teams in the field that have been here multiple times and know what to expect in this environment.”

McDonald, 32, is an insurance claims adjuster. Forget, 27, is a residence coordinator at Queen’s University and Chadwick, 28, is a shift manager for an industrial air handling company.

“The easiest way to explain it is I try to infer cognitive abilities through behaviour,” the vice explained.

“It’s generally people who have had some kind of brain injury. I have them do paper-and-pencil tests for the most part and answer questions. Through that you can determine the level of their abilities.

“For the most part, it’s people who have suffered injuries in car accidents. That’s the big one. But it’s broad range of anybody who is suffering from cognitive limitation.”

With six university degrees between them, including Beuk’s two postgraduate degrees, Team Ontario is a brainy bunch.

“We’ve got a lot of brains on the team,” Beuk acknowledged. “Sometimes the key is shutting off the brains for a few seconds.”

Beuk says he and his teammates grew up watching Ed Werenich, Howard and Wayne Middaugh win at the Brier.

Howard’s was the last Ontario team to claim a Canadian title in 2012 in Regina.

“I don’t think a lot of people are predicting that we’re going to be the favourites this week, so we get to play the underdog card a little bit,” Beuk said. “That takes some of the pressure off.” 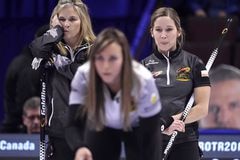 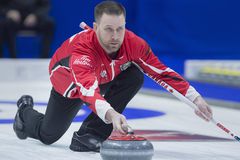