Mick Ruis packed his suitcases for his first trip to the Kentucky Derby as an owner and trainer.

The 57-year-old high-school dropout stuffed more than clothing and toiletries in his bags. He feels so strongly about Bolt d’Oro’s chances — the colt is the co-fourth choice at 8-1 — Ruis packed plenty of cash.

“When he dropped from first to fifth or sixth now after he lost the Santa Anita Derby, every week I just put more money in a suitcase to come here to bet on him Saturday,” Ruis said. “That’s how confident we are.”

“But you can’t put a money value on winning the race,” he said.

Ruis is an anomaly in the sport because he owns, trains and handles much of the work around the barn, all with his horses.

He first came to love racing on a 1979 visit to Agua Caliente in Tijuana, Mexico. Leaving high school, he worked his way up from entry level positions in construction and shoring. He started his first company with US$3,000 and sold it six years later for US$2.5-million.

Ruis used the stake to go into training and racing thoroughbreds, but crashed out in the middle of the last decade. He earned $467,981 in purses over three years before finding himself US$1-million in debt. “Never worked so hard to lose so much money in my life,” he said.

He turned full-time attention to his San Diego-based company American Scaffolding, which has contracts on ships in five states and with the Navy. Driven to find a path back into racing, he built up the company and sold it for a reported US$78-million two years ago while keeping a 20-per-cent stake.

Ruis is faring much better his second time back in the sport.

He spent about US$2-million on horses to get Ruis Racing underway. One of his purchases — for US$635,000 — in 2016 was Bolt d’Oro, named for retired Olympic champion sprinter Usain Bolt and the colt’s sire Medaglia d’Oro.

Some of his family is along for the ride, including wife Wendy. The couple married 23 years ago after knowing each other for three weeks. He was divorced with three kids and she was widowed with two. Together, they had two more. His 25-year-old daughter, Shelbe, is his assistant.

Most owners with a horse in the Derby for the first time revel in seeing their silks during the post parade as the 100,000-strong crowd sings My Old Kentucky Home.

Once again, Ruis is going his own way.

Jockey Victor Espinoza will wear the colours of Spendthrift Farm aboard Bolt d’Oro on Saturday. Ruis sold 50 per cent of the colt’s future breeding rights to 84-year-old Spendthrift owner B. Wayne Hughes, while keeping the rest for himself. The change in Derby silks was a gift to Hughes, the billionaire owner of Public Storage.

“I’m not in here to be the centre of attention,” Ruis said.

He admits the hubbub of his first Derby week has been stressful.

“You’re thinking about the high, what could be,” he said.

To escape, Ruis went back to his roots. He headed across the Ohio River to visit a wrestling club in New Albany, Indiana, on Wednesday. A gold medallist in the Junior Pan Am Games as a high school wrestler, Ruis likes to quote Olympic champion Dan Gable and credits the sport for teaching him a work ethic and respect.

He spoke to the group of boys ranging from age seven to 18 and then donated US$10,000 to their club.

“They’re building character,” he said. “These guys will make it out in the world.”

“I got a bunch of guys rooting for Bolt to win,” Ruis said, smiling.

After the colt’s morning workout, Ruis headed out of town to decompress Thursday, this time down Interstate 64 to Lexington, where he bought a farm near Keeneland.

A Derby win can generate more clients with good horses for a trainer. But Ruis isn’t interested.

“Right now, we’re really happy where we’re at,” he said, anticipating the 20 yearlings he has coming into his stable.

However, he would like to see other owners expand their choice of trainers beyond the sport’s big names of Bob Baffert, Todd Pletcher, Steve Asmussen and Chad Brown.

“There’s so many good horsemen on the backside, give some of these guys a chance back here,” Ruis said. “I don’t understand why these mega-owners just go with the big name. I don’t think it’s the best thing for racing.”

While careful not to criticize the high-profile trainers, Ruis sees himself as the person to stand up for the little guys.

“I would hope if we do good, that’s the message Bolt d’Oro can give,” he said.

Ruis isn’t planning much of an upgrade to his trademark white T-shirt and jeans for Derby day. He took advantage of a buy-one-get-one-free deal at a men’s store and will wear a $220 sportcoat over the shirt.

Explaining his attire to his wife, he said, “I made my money with a white T-shirt.”

She replied, “The rest of us are going to look good.”

They all will if their colt is in the winner’s circle wearing the garland of red roses.

Bob Baffert is back at the Kentucky Derby – and looking to break the Curse of Apollo
May 2, 2018 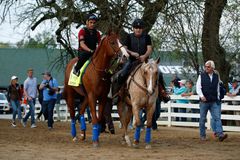 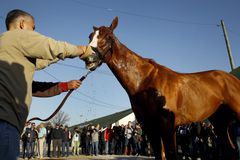 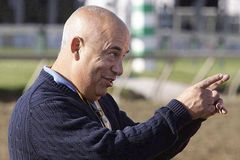