Mike Reilly scored the go-ahead goal 8:48 into the third period, and the Ottawa Senators snapped a seven-game road skid with a 5-2 win over the Buffalo Sabres on Tuesday night.

Tyler Ennis had a goal and assist and Jean-Gabriel Pageau also scored for Ottawa, which had gone 0-4-3 on the road since a 5-2 win at Edmonton on Dec. 4. Mark Borowiecki sealed the victory by blocking Marcus Johansson’s point shot and then banking the puck off the boards and scoring into an empty net with 2:06 remaining. Nikita Zaitsev added another empty netter with 6 seconds left.

Though Pageau’s goal was his 20th of the season, he was most excited to see Borowiecki score his sixth.

“To see him score that goal after the two blocked shots, I would love to see the camera on our bench. Everyone was so pumped, and everyone was so happy,” Pageau said.

It was well-deserved reward for a blue-collar defenceman who required between five and six stitches to close a gash under his right eye after getting high-sticked during 4-3 shootout loss to New Jersey on Monday. And it came some seven minutes after he briefly left the game with a right leg injury after being upended from behind by Buffalo’s Kyle Okposo.

“It’s always nice to get rewarded, but that’s just the cherry on top,” said Borowiecki, who had an ice pack on his right knee. “I think I take more pride in the blocked shots than I do on the goal.”

Craig Anderson stopped 37 shots to snap an 0-4-1 skid during which he allowed 22 goals.

Sabres captain Jack Eichel scored his career-best 29th of the season and Sam Reinhart also scored for Buffalo, which was playing its first game following a 10-day layoff.

Sabres starter Linus Ullmark was unable to put weight on his right leg in being helped off the ice with 9:32 left in the third period. Ullmark, who stopped 17 of 20 shots, was hurt while untouched in his crease. With Ottawa’s Artem Anisimov circling the net, Ullmark’s left skate slipped out from under him, and he fell back with his right leg bent under him.

Coach Ralph Krueger had no immediate update on the severity of Ullmark’s injury except to say the goalie will require further evaluation on Wednesday.

“That’s part of the game and we have to deal with it,” Krueger said of the injury, before turning his attention to the loss.

“I think today, more painful is the way we lost the game, what we did and didn’t do to get the points we desperately wanted here tonight,” he said. “We seemed to be in it, and then we fell back, and it just went that way all the way. We never really got a rhythm.”

Carter Hutton took over and finished with eight saves in a game the Sabres twice rallied from one-goal deficits, before being outscored 3-0 in the final period.

Reilly’s goal came 43 seconds after Buffalo’s Michael Frolik was penalized for roughing. Ennis set up the goal by driving the left circle and then making a no-look drop pass to Reilly, who blasted a shot in through a crowd from left point.

The Senators entered with the NHL’s worst-ranked power-play unit and converted on each of their first three chances. The three power-play goals were the most by Ottawa since a 4-3 overtime win at Winnipeg on Feb. 16, 2019.

Skinner was off to a slow start after signing an eight-year, $72 million contract last spring. Before getting hurt, he had 11 goals and eight assists for 19 points in 39 games a season after scoring a career-best 40 goals.

Ottawa improved to 2-5-5 in its past 12, a slump that began after a 3-1 win over Buffalo on Dec. 23. ... Sabres GM Jason Botterill spoke earlier in the day and defended coach Ralph Krueger’s decisions to occasionally play D Zach Bogosian and C Evan Rodrigues after both requested trades. “Hey, if a player does go to the media, it’s not going to change how we’re going to dictate things,” Botterill said, while noting he and Krueger have made clear how they felt about the players’ comments. ... Bogosian and Rodrigues were both healthy scratches. ... The Sabres held a 24-second pre-game moment of silence in honour of Kobe Bryant. 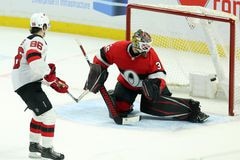