Toronto Blue Jays manager Charlie Montoyo insists he isn’t all that married to the concept of using relief pitchers to start baseball games.

The use of an opener (as opposed to a starter, or a closer) is growing in the game, popularized by such teams as the Tampa Bay Rays, where Montoyo cut his teeth as a major-league coach before moving to the Blue Jays this season.

To have to resort to an opener, the manager said before Friday night’s game against the Chicago White Sox at Rogers Centre, probably means your starting rotation is in disarray.

That certainly described the reeling Blue Jays and necessitated Montoyo having to pluck Daniel Hudson out of the bullpen to start against the White Sox.

Hudson held the White Sox (16-21) to one run in the opening frame in a game in which the Blue Jays bats, for once, showed some early sting as Toronto (16-22) rallied for a 4-3 victory in the first of a three-game weekend series and snapped a five-game losing string.

Toronto sent seven pitchers to the mound. Sam Gaviglio pitched 2⅔ innings and allowed one run and one hit, but the win went to Joe Biagini, who pitched 1⅓ innings of no-hit ball. Ken Giles worked a perfect ninth for his 100th career save.

“I’m lost for words,” said Giles, who arrived in Toronto last year in a trade with the Houston Astros for disgraced closer Roberto Osuna. “Number 100 is a big deal. It’s a lot of hard work, a lot of ups and downs in my career and in life. Just to get to that point, I’m very thankful for everybody that’s been there for me.

“From day one, giving me my first chance to close out games, it’s a dream come true. And then most definitely coming here and embracing me. It was a big huge thing for me.”

Randal Grichuk walloped a three-run home run off Chicago starter Dylan Covey in the Toronto half of the first to ignite what had been a stagnant Blue Jays attack. Teoscar Hernandez did likewise in the second, a solo offering to right-centre that move Toronto ahead 4-1.

Chicago’s Tim Anderson homered off Gaviglio in the fifth.

Hudson has been doing a bang-up job out of the Blue Jays bullpen in middle relief this season with a 2-1 record and a 3.63 earned-run average in 17 outings. It was his first start in almost a year. He made a one-inning outing for the Los Angeles Dodgers in June.

He had to be called on as an emergency replacement for Clay Buchholz, who was put on the injured list earlier in the day with right shoulder inflammation.

After a decidedly slow start to his major-league career, baseball’s top prospect, Vladimir Guerrero Jr., arrived at the ballpark Friday to discover he had been elevated to No. 2 in the batting order. Eric Sogard, who is hitting .333 this season, was in his familiar leadoff spot.

Guerrero’s elevation in the order is kind of surprising when you consider the 20-year-old third baseman entered his 11th game hitting just .162 with six hits in 37 at-bats and only one extra-base hit, a double in his first game. He has hit fifth in the order nine times and fourth once.

Montoyo was asked why Guerrero was batting second.

“He’s had some good at bats.” Montoyo said. “He hasn’t got any hits but he’s had good at-bats and I like the idea of him getting into the action quick. Having Sogard and him having good at-bats at the top of the lineup, that’s always good.”

Although he had struck out 11 times in those 10 games, Guerrero has actually shown some decent plate discipline. Heading into Friday’s game he led the Blue Jays in average pitches per plate appearance at 4.32. Sogard, at 4.30, ranked second.

The change did not produce the results Montoyo – and Guerrero – were hoping for as the rookie went 0-for-4 to see his average dip to .146.

The Blue Jays are not certain yet how long Buchholz might be laid up, but they’re hoping it is not too long.

Toronto’s rotation is in a bit of a shambles right now with Buchholz joining Matt Shoemaker on the IL, out for the year with a knee injury.

Montoyo is not a fan of using a reliever as an opener, which is becoming more popular in baseball.

“If we don’t have to, it means the five starters are doing good,” Montoyo said. “But we’re not there now. We need to be creative with what we do with the pitching now.”

Toronto’s starters have won only seven games this year. The starters are averaging 84 pitches an outing through the first 37 games, which puts the Toronto rotation near the bottom of the majors.

Thomas Pannone, who was optioned to Toronto’s Triple-A affiliate in Buffalo on Thursday, was summoned back to the big-league club on Friday to fill Buchholz’s roster spot.

The Blue Jays also brought up Jonathan Davis from Buffalo and he got the start in centre field. To make room for him the extremely light hitting Socrates Brito (.077 with 17 strikeouts in 39 plate appearances) was designated for assignment. 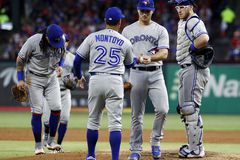