Pascal Siakam opened the NBA Finals looking more like a league superstar than a youngster making his debut in a championship series.

The Cameroonian power forward rollicked for a career-playoff-high 32 points to help his Toronto Raptors beat the reigning champion Golden State Warriors 118-109 in Game 1 of the Finals.

Kawhi Leonard had 23 points on a so-so 5-for-14 shooting night, as his Raptors teammates chipped in on a well-rounded effort over the powerhouse Warriors. Marc Gasol scored 20, while Fred Van Vleet added 15 and Danny Green had a bounce-back 11-point night.

Stephen Curry scored 34 points for the Dubs, a team seeking its third straight championship. Klay Thompson added 21 and Draymond Green had 10 to go with his game-leading 10 rebounds. It was the first time in their five straight trips to the Finals that the Warriors lost a Game 1.

“His motor is pretty much nonstop. So even if you feel like you’re in transition, you’re running shoulder to shoulder with him,” said Curry of Siakam. “We’re down 0-1 but it’s not the end of the world. New experiences for us all the way through, but we have proven our resiliency and ability to win games that we need to.”

Tens of thousands once again packed Jurassic Park and the city’s streets around Scotiabank Arena to feel a part of the first-ever NBA Finals game played outside the U.S. Many neighbouring cities popped up their own mini-versions in outdoor squares across the Greater Toronto area.

Inside the stadium, the crowd was decked in glow bracelets and black playoff shirts that had every incarnation of the Raptors logo in its 24-year history. It was a nod to the journey from quirky Canadian upstart to NBA Finalists.

Drake was in his usual courtside seat wearing something that supported both his hometown team and the Curry family – an old-school purple Dell Curry Raptors jersey.

The Raps brought a long line of famous personalities from its history to the court for a wave, including Curry Sr., Isiah Thomas, Charles Oakley, Tracy McGrady, Chris Bosh and Damon Stoudamire

Toronto’s Green hit his first three pointer since Game 4 against Milwaukee – a series in which he’d gone a frosty 4-for-23 from beyond the arc. Gasol hit a pair of them too, as Golden State sagged well off the Raps big man defensively, daring him to shoot long ones.

Iguodala was buckling down tightly on Leonard defensively to limit the Raps superstar, and other teammates like Klay Thompson were helping. Curry hit a trio of three-pointers as part of his 11-point quarter, but the champs trailed the hometown hosts 25-21 going into the second.

Golden State was without star Kevin Durant, still sidelined with a calf injury he suffered in Game 5 of their second-round series against the Houston Rockets. But DeMarcus Cousins made his highly-anticipated return for the Dubs. The four-time All-Star centre had been out since injuring his right quadriceps muscle in Game 2 of the opening round versus the LA Clippers. He took a quick four-minute shift in the second – contributing a couple of free throws – but he’d be back later.

There were signs of Toronto’s swelling confidence in that second quarter. Siakam was rolling to the rim and hitting threes as well, despite the defensive pressure of Dubs’ big-time defender Green. While Golden State ran many other centres off the floor in these playoffs, Gasol was rolling, providing tight defence without too many fouls and finding buckets in the paint.

Leonard, who had been 1-of-7 to that point, charged to the rim to score a fiery one – zig-zagging around Iguodala and bowling over Curry, drawing the Warriors All-Star point guard into a foul.

Curry went scoreless in the quarter, while Klay Thompson and Quinn Cook were the only Warriors who really got it going.

“Kawhi didn’t have his best game to his standards but other guys stepped up,” said Thompson. “Yeah, we did a good job of limiting Kawhi, but it’s not Kawhi Leonard; it’s the Raptors

Green hit another big three for the Raptors – an unlikely one – off-balance and with Thompson right in his face. The Toronto faithful crowd supported him with chants of “Danny, Danny!”, as the Raps galloped into the locker room holding a 59-49 half-time lead.

Curry came out scoring hot, but so did Siakam. Toronto’s “Spicy P” exploded for 14 points in the quarter on crafty lay-ins and athletic jumpers, speeding past the Dubs in transition, since as would later say of Siakam “his motor is non stop”. He did so while also guarding the sharp-shooting Thompson much of the time on the other end. He’d also add eight rebounds and five assists, and shoot 14-of-17.

“I think he made played an amazing game obviously, but he got out in transition and our transition D was horrible, and I let him get in a rhythm in the first half, first quarter really,” said Golden State’s Green of Siakam. “You still have to take your hat off to him, even before this game, of what he's been able to accomplish this year. He's become ‘a guy’.”

It was another reminder of Siakam’s remarkable journey, from a boy in Africa with little basketball in his childhood to this meteoric rise in just his third NBA season. Thursday, he was wearing his beloved photo locket around his neck, one that features his mom and the dad he lost in a car crash in Cameroon while he was away playing basketball at New Mexico State University. Siakam dedicated his performance to his dad on Thursday.

“People always usually tell me that ‘I know he’s proud of you’, and I kind of want to hear it from his mouth,” said Siakam of his late father. “No matter how many points I score, I’m playing for something bigger than myself.”

Leonard broke out for 10 points in the third. The Raps called Patrick McCaw off the bench for the first time since Toronto faced the Philadelphia 76ers in the second round. The ex-Warrior hit a three and provided some defensive energy, as Toronto went into the final quarter up 88-81.

Cousins was back on the floor in the fourth for another four minutes and added one more point. Behind Curry, they pulled to within three points, but would go no further.

Leonard, Van Vleet, Siakam and Green helped propel the Raps back into a comfier lead and closed it out. Kyle Lowry would finish the night with seven points, nine assists and six boards, and drew out some huge defensive fouls.

In photos: Raptors face off against Warriors in Game 1 of NBA Finals
Gallery
May 30, 2019 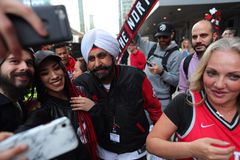