One of the most infamous dropped passes in football history clanged off Dallas Cowboys tight end Jackie Smith as he lay in the end zone during Super Bowl XIII.

Poor Smith. Forty years ago, he had only his bare hands to try to pull in Roger Staubach’s low pass. Had he played in a more recent edition of the NFL playoffs, he almost certainly would have been wearing a pair of the sticky, silicone gloves that have transformed receivers’ mitts into virtual Spider-Man hands.

The technological advances on the skin of those gloves have been so profound that they now enable receivers to snare passes their forebears never dreamed of catching, and in making the seemingly impossible possible, they may be changing the way football is played.

The grippy polymer used on the new generation of gloves, said to be developed first by a Canadian wide receiver and a chemist in a Pakistan laboratory in 1999, is about 20-per-cent stickier than a human hand – according to a recent study by the MIT Sports Lab performed at the request of The New York Times.

The technology has made life easier for receivers at all levels, of course, and now it is rare for any player in search of a better grip – including quarterbacks, running backs and tight ends – not to make them part of his standard equipment. Even defenders have taken to wearing them.

“The gloves definitely help with the one-handed catches,” said Rasul Douglas, a cornerback for the Philadelphia Eagles who wears a Nike version. “You rarely see guys making one-handed catches without gloves on.”

For those who have not played football in the past 15 years, just touch a pair at a sporting goods store. It will be obvious why the gloves, now manufactured by several companies, are probably the most significant performance-related football equipment innovation since the advent of the cleat.

“There’s no long-term statistical data that I’ve seen,” said Rich McKay, the chief executive of the Atlanta Falcons and the chairman of the NFL’s competition committee. “But they definitely make some difference, there’s no doubt about that.”

When a catch is made, the naked eye often sees only hands grabbing a ball. But what is happening on the palms of a receiver’s gloves is far more complex: the scientific principle of polymer adhesion and the miracle of a molecular chain of silicon and oxygen that creates polysiloxanes – viscoelastic substances commonly known as silicone rubber. Silicone is used to make a wide range of products, including caulk, kitchen tools and Silly Putty. Receivers use it to make highlight-reel plays.

According to Sanat Kumar, a professor of chemical engineering at Columbia University and a specialist in polymers, the sticky property exhibited in a viscoelastic medium arises because the material acts as both a solid and a liquid.

“It is macroscopically a solid,” Kumar explained of the silicone. “But at shorter, microscopic lengths, it is liquidlike.”

That liquidlike property makes it sticky. Imagine a tight spiral thrown onto a hard surface such as a road. It skips right off. Now imagine the same ball chucked into a large puddle of honey. The honey makes the grab. That is because the silicone surface of the gloves is, at the microscopic level, a viscous, honeylike liquid, and when a football comes in contact with it, the ball stalls in it the way it would on the surface of a gooey liquid, such as the honey. The ball must work to get through it.

Anette Hosoi, a co-director of the MIT Sports Lab and an associate dean of engineering at MIT, is an expert on the interface of soft materials. She and her students conducted experiments on a pair of blue Under Armour UA F6 gloves last week to quantify their tackiness, basically measuring the force required to pull a leather Wilson football over both the gloves and over a bare hand, in both dry and wet conditions.

The experiments were led by Sarah Fay, an MIT doctoral candidate, who determined the gloves had a coefficient of friction of 1.64 when dry, which is roughly 20 per cent more grip force than that of a bare hand (1.37 CoF).

(Fay also noted that statistically, and perhaps surprisingly, there is no significant difference between the friction of a wet glove and a wet hand.)

Looking over a pair of Under Armour gloves in her office near the Charles River, Hosoi said the key to their performance was how soft and deformable the silicone is, meaning it covers and adheres to the tiniest variations on the surface of the ball, enabling it to almost melt into them.

“Every time you get more deformable, you get a better adhesion,” Hosoi said after slipping on a pair and palming a leather football with her left hand.

But as any coach or Eagles fan knows, adhesion alone does not guarantee catches. As Douglas, the Eagles cornerback, said before last week’s loss to the New Orleans Saints, “There’s people with gloves on who are still dropping passes every game.”

The birth of the current generation of supergloves can be traced to a wintry day at the University of Ottawa in 1995. A receiver named Jeff Beraznik, who would later found Cutters Sports Gloves, noticed a star from rival Calgary, Donnavan Blair, fielding practice punts with one hand while wearing a pair of orange gloves.

The next year, Beraznik called Calgary’s equipment manager and learned that Blair was wearing glass cutters’ gloves – rubbery mitts designed to protect workers and do-it-yourselfers from cuts from glass edges. Those gloves, he found, could be purchased at any hardware store.

Beraznik bought a pair and modified them to fit more snugly. They were not perfect, he said, but they were good enough, and once Beraznik’s teammates stopped making fun of him, they all wanted a pair of their own.

“The whole team was, like, pass me a pair of those glass-cutter gloves,” Beraznik said. Hence the name of his company, Cutters.

Beraznik spent 18 months after college travelling the world seeking the perfect material, one that was stickier but also less bulky. He teamed with a safety-glove company in Toronto called Midas, which sent him to a lab outside Karachi, Pakistan, to work with one of its chemists.

With a football in hand, Beraznik made repeated trips to Karachi in the late 1990s, at times rolling up his sleeves to work on the formula – adding a little more of this and a little less of that. One day, he and one of the chemists arrived at the current formula, which was named C-Tack.

The modern glove, a huge improvement on the scuba diving gloves worn by NFL receivers at the time, was born. Other manufacturers, including a company founded by Jim Sandusky (another Canadian football player), were working on similar products. Eventually Nike, Reebok, Under Armour and others produced their own. 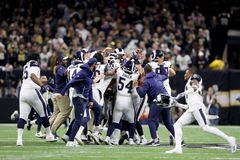 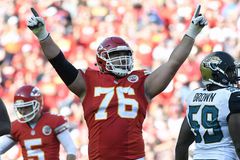