The FOMO (fear of missing out) was real on Wednesday night, with the long lineups snaking through the parking lots surrounding Toronto’s BMO Field showing little sign of subsiding as Canada men’s national team kicked off its crucial World Cup qualifying game against Panama.

In all fairness, trying to admit almost 30,000 fans into a stadium while adhering to strict COVID-19 protocols was always going to be arduous. But that didn’t stop fans taking to social media to express their displeasure with the proceedings, with some describing the proceedings as a “complete and utter shambles.”

They needn’t have worried.

Although Panama scored on its very first trip up the pitch, with Rolando Blackburn tapping in after Canada’s defence showed some fan solidarity by forming a static line of its own, it turned out Canada was just getting warmed up. The national team registered its biggest win of the final round of qualifying for Qatar 2022, rolling to a 4-1 win to keep its World Cup dream well and truly alive.

With the second-placed United States edging Costa Rica 2-1 earlier in the day, Canada leapfrogs Panama to move into third in the eight-team group with 10 points after six games, one back of the United States heading into a pair of games in November, against Costa Rica and Mexico, to be played in Edmonton. The top three teams after 14 games qualify for next year’s World Cup.

While many in the Canadian lineup responded to head coach John Herdman’s call to be more “ruthless” after a goalless draw in Jamaica on Sunday, no one displayed that edge more than Canada’s reigning men’s player of the year, Alphonso Davies. Whether he felt any extra inspiration after watching his girlfriend, Jordyn Huitema, register a hat trick for Paris Saint-Germain in the UEFA women’s Champions League on Wednesday afternoon, Davies had some extra zip in his already fairly zippy step.

His regular employer – German champion Bayern Munich – may not have been ecstatic at seeing Davies in the starting lineup for the third time in seven days, particularly after he limped home during the last international break in September, but if there was any fatigue it hardly showed. That point was driven home on his winning goal in the 66th minute, when he sprinted more than 30 metres to chase down a hopeful ball from striker Jonathan David.

After pressuring Harold Cummings to turn over the ball right on the touchline, Davies spun infield and barrelled towards the opposition penalty area, quickly wrong-footing his marker, Fidel Escobar, before driving a left-footed shot past a stationary Luis Mejia in the Panama goal.

“I was contemplating going for the ball or not,” a nonchalant Davies said afterward. “But I saw the defenders looked a bit confused so I started picking up pace.”

Teammate Maxime Crepeau, who saw everything unfold from his position at the other end of the pitch in the Canadian goal, was a bit more enthused about what could end up being a defining moment in Canada’s World Cup qualification campaign.

“That was pretty cool. Great run,” the Vancouver Whitecaps goalkeeper said. “He believes that he could get there, the ball was on the line, he took it and then showed his quality.

“I’ve witnessed a lot of great goals but that was a great moment for the country … and a changing moment in the game.”

Even Drake took notice apparently, with Herdman saying afterward the Toronto rapper had reached out to Davies.

“He just got a text from Drake,” Herdman said. “Drake wants to meet the boys.”

Nominally a left back in Germany, Davies was deployed by Herdman on the left side of Canada’s attack, but it was clear Davies had been given a mandate to roam wherever he saw fit. Some commentators have already crowned the 20-year-old as the best player in the CONCACAF region, and while those kinds of accolades are unlikely to go to his head, his ability to go around any Panamanian defenders crazy enough to think they could contain him will do little to dampen the fervour.

“We’ve got some really quality players in the squad and it’s a pleasure sharing the pitch with them,” Crepeau said afterward.

Five minutes after Canada fell behind, Davies put David through on goal, but despite a record of 16 goals in 21 appearances entering this game, David tried to square the ball to David Wotherspoon, whose shot was blocked. Davies simply glared at his teammate.

David had another opportunity five minutes later, but while he decided to shoot at this point, his tame left-footed effort proved to be a comfortable save for Mejia in the Panama goal.

Predictably, it was Davies who served up the tying goal, capping an industrious first half hour by driving an in-swinging corner kick toward the near post. Although it missed the head of Tajon Buchanan, it inadvertently struck the head of Michael Murillo before striking the back of the Panamanian net.

Tempers began to flare on the verge of halftime, with soccer’s version of hockey’s bench-clearing melée – appropriately enough with the Toronto Maple Leafs playing their home opener across town – with everyone but the Panamanian goalkeeper jostling over a perceived slight around the corner flag. But the interval allowed everyone to cool off, and Herdman was able to refocus his troops.

An even more purposeful Canadian team emerged after the break. After spending the first 20 minutes or so knocking on the door, Davies’s signature moment ended any vestiges of Panamanian resistance.

Seemingly mindful of its record of four draws in five qualifying games, Canada refused to take its foot off the gas, with further goals from Buchanan and David putting the exclamation point on what Herdman described as a “dominant home performance.” 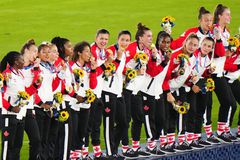 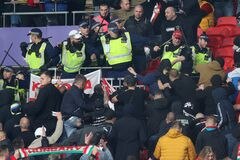 In NWSL, protests and demands as league returns to field
October 7, 2021 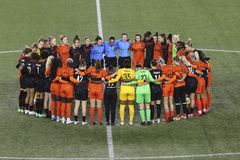