Lately, I have become obsessed with Alison Roman.

Six weeks ago, I’d never heard of her. But along with Theresa Tam, and that strange stain on your living-room ceiling you hadn’t noticed until four people asked you about it when you were video-conferencing with them, Roman is one of the breakout stars of the pandemic. She writes about food for a living.

Since discovering her, I’ve participated in the creation of Alison Roman’s labneh with sizzled scallions, Alison Roman’s frizzled chickpeas and onion with feta and oregano, and Alison Roman’s spicy pork meatballs in brothy tomatoes and toasted fennel.

By heritage, I am Irish. So, this is pretty close to a ‘get Rome on the phone’-type miracle.

I have rearranged the kitchen so that it is more like Alison Roman’s. I’ve ordered a special cutting board because Alison Roman uses one. The other day I had a weird conversation, in which I tried to explain to a cookery person how Alison Roman uses what I would describe as a “food trowel,” how much I would like to own said trowel and so what exactly is this trowel thing called?

On Saturday, I watched two solid hours of Alison Roman cooking tutorials. YouTube no longer suggests any other sort of videos to me but Alison Roman videos.

For those who are healthy and secure, the pandemic has reduced us to three essential questions: “Is it too late to get dressed?”; “Is it too early to be this drunk?”; and, “What exactly did I used to do with my free time?”

My boss and I were discussing the last one vis-à-vis my recent conversion to The Groovy Lifestyle Church of Alison Roman.

I was trying to convince her to try the carmelized shallot pasta with anchovies. Maybe get a trowel. Just a starter trowel. You’ll like it. Watch some videos. Make some new friends. Cook a whole chicken in buttered tomatoes. Start styling your hair differently. Quit your job and become a cutting-board influencer. Easy does it.

In a tone very much like the one therapists on the Lifetime TV network use during interventions, she said: “You used to have sports. Now you have Alison Roman.”

It is becoming alarmingly clear how much sports tethered me to reality.

This has something to do with the temporality of sports. You can’t ‘catch up’ on sports or work ahead on them. You have to be there in the moment. Games only have value when they are seen in real time. No other art is like this.

Have you ever had the experience of turning on a TV at a time when sports are not supposed to be on and finding them there? Say, baseball on a weekday afternoon, which happens a few times every season. You cannot say exactly why, but it’s disorienting. Your sense of time has been interrupted.

For most of us, two things happen with unshakable regularity – you get up and go to work, and they play sports. When you have neither one, mental drift is the result.

If work is the main stage, sports is the soundtrack coming up out of the orchestra pit. Hockey on Saturday nights and football on Sundays. Golf in spring, tennis in summer, and the Olympics coming in every once in a while to jazz up what is usually a hole in the annual schedule.

You can choose to be a part of this rotating theatre production or not, but it is still a dependable way to set your internal clock.

At first, the absence of sports was a nice break. There really are too many of them happening too often. It does get to be a bit much.

That feeling lasted a couple of weeks.

At that point, it was becoming apparent that there probably wouldn’t be any sports as we know them for a long while. You were too busy folding all your T-shirts again or trying to hide your phone from yourself to notice.

Some time around Week 4 or 5, an emergency situation started to feel less alarming – because that’s what the human brain does in all crises – and you slowed down.

Time began to lose all meaning. One day became very like another. One imagines this is what it’s like living on the International Space Station, except the only important work you are doing is triaging the produce in your fridge.

This was the weekend that I began to miss sports. Really miss them. Not the games themselves or the results.

One of the questions sports writers are constantly asked is, “Who do you root for?” Every sports writer has the same answer: “No one. I root for the story.”

We don’t care who wins, as long as however that happens is interesting enough to wrap 800 words around.

I miss sports right now because they are the faint ticking you can hear in the background of life when you sit quietly for a moment.

They give you the sense that time is progressing and the centre is holding. That everything is, if not perfect or even good, at least normal.

They can stop making movies or publishing books, and there are still plenty of movies and books to catch up on. But without new sports, there are no sports at all. The whole thing – poof – disappears.

I opened up my copy of the Times on Sunday and there was no Sports section. The pandemic had just disappeared a whole tranche of average life.

Considering everything else that’s going on, that’s hardly a tragedy. But it is chilling. It reminds you how close we’ve always been to tipping over the edge. For many who are alive now, that feeling may never leave them.

Even a da Vinci-level genius such as Alison Roman can’t fill that void. From now until the end, I will think of life as having two polarities – the periods when you have enough free-floating mental energy to seriously consider curing your own bacon, and the better periods when there are sports.

Opinion
Sports are the light at the end of the coronavirus tunnel
March 12, 2020 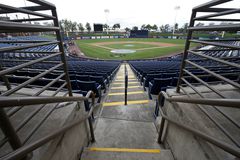 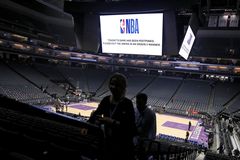 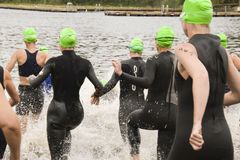