In the end, Josh Donaldson didn’t follow up on his implied threat to rip the Blue Jays on the way out the door.

Instead, he took pity on them, which might be worse.

Turning away from three years in Toronto, two playoff runs and an MVP award was “difficult in the extreme,” Donaldson said. He didn’t bother looking mournful as he said it. He sort of grinned.

Then on Monday, Donaldson passed on a great schadenfreude buffet, electing to go on a rehab assignment instead of coming back up north with the Cleveland Indians later this week.

He would certainly have got a standing ovation from the Toronto crowd.

If that might’ve hurt, it would at least have given Rogers Centre fans an opportunity to salute something this year, and perhaps for the next few.

Now that we’re all talking plainly to each other about the baseball team again, we can finally get on the same page – this team is bad and will get a lot worse. That’s no longer poormouthing. It’s an agreed statement of facts.

This was surprising news to some people, since they had got used to a very different sort of message.

But with Donaldson gone and all hope now lost, the Blue Jays went back to their books and discovered a small discrepancy. For a couple of years now, they have operated on the assumption that this team is, in fact, good.

That was a clerical error. It’s unfortunate, but these things happen when you are busy selling seats in bulk and marketing gets its wires crossed with communications and so on. It’s like that time you bought an electric car on the assumption that the people who sold it to you could, you know, make it.

Upon closer examination by registered professionals, it turns out the Jays were not any good now, but may be good later. That’s why they had to trade one of the game’s best for a player who has still not been named, and will only disappoint people once he is.

In his first TV interview after the trade – when he was still trying to get his corporate patter aligned with the fantasy that bad deals are good deals as long as you say so – Jays general manager Ross Atkins told Sportsnet’s Arash Madani that the Donaldson trade was done because it was “best for our future.”

On an unrelated note, I have a 14-year-old patio set that I’d like Atkins to come over and see if he’d like to buy. For his future.

Having finally admitted that the idea of contention is so far in the rear-view that it lies beyond the horizon, Madani asked the boss when they might be good again.

I would like to quote the answer here, but it is so disjointed, has so many grammatical switchbacks and qualifiers, that while it is English, it makes almost no sense to your average English speaker in transcript form.

It’s the equivalent of the answer you give a job interviewer when she asks you to identify your biggest weakness.

You’d like to be straight-up: “I don’t think I have one” or “I steal things. Money, mostly.”

But since you don’t know what the interviewer wants to hear, you start spinning your wheels, checking her face for clues. How’s this going over? Is she buying this? Do I have any idea what I’m talking about?

You do not. But you are talking. That is a species of victory.

That’s where Atkins was at on the contention question. In the end, he arrived at three years from now.

Or, as he put it (as non-incriminatingly as possible), “The third year removed after that, we absolutely believe we should be in that mix.”

What’s “the mix,” exactly? First place? Wild card? Or is a distant third place with honour in “the mix” as well?

I have a guess. And it isn’t a generous one.

We’ve also spent some time over the past few days, weeks, months and – very soon – years going over how great the Jays’ farm system is.

We’re going to see some of this marvellous farm system in the final few weeks of the season, getting its head handed to it by mediocre players currently in the major-league system. Everyone should pay attention.

The Blue Jays will functionally start from scratch next year. With a few pitching exceptions, all the people who they believe will anchor this three-years-from-now contender have yet to play a big-league game.

Are we honestly supposed to believe that, barring a major infusion of expensive, experienced talent, this team will be the equal of the Red Sox and Yankees 30 months from now? On what basis is that assertion being made?

Saying the Jays will be competitive in three years is like saying NASA will get to Mars in the same time period because there are so many smart kids in engineering school right now.

Untested, on-paper talent does not equal future returns. High ceilings don’t always translate to wins. The best way to measure a major-league team is starting with one that is in the major leagues.

I suppose that people who thought the team was in contention this year will buy this advertising line. Some people will believe anything and some others are paid to do so. Together they’re building a regular, old dream palace down on the lake shore. Not a place where dreams come true, but where they are lucratively manufactured and sold (minus warranty).

Maybe this was bouncing through Donaldson’s mind as he arrived in Cleveland. Maybe that’s why he took a pass on coming back this week to vent his spleen. Maybe he was thinking it when he hit a grand slam Monday for Cleveland’s Triple-A team.

And maybe he was thinking that he doesn’t need to take his revenge on Toronto. The Jays are doing it for him, and will be for a while. 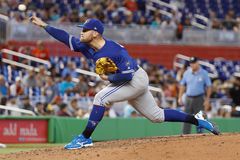 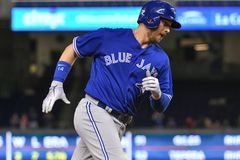 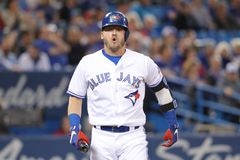