The tears were flowing freely throughout Rogers Centre during the lead-up to Tuesday night’s game against the Baltimore Orioles as word spread about the trade of Kevin Pillar.

Pillar was one of the Toronto Blue Jays most beloved players, both within the clubhouse and among a legion of baseball fans who came to adore the reckless abandon in which he patrolled the outfield for Toronto over six seasons.

Not blessed with blinding speed, Pillar made up for that deficiency with lightning-quick reads when the ball came off the bat and the fearless nature he displayed once he took up the chase.

There wasn’t an outfield wall he wouldn’t hurl his body into at breakneck velocities to try to make a catch, nor was he averse to laying his body out prone and then crashing to the ground if it meant making the out.

Canadians love their athletes to be all rough and tumble, with humbling back stories. Pillar was all that, and the native of California was, at the very least, an honorary Canadian.

He became known as Superman to his fans for his high-flying antics.

The fact that he was even playing in the big leagues was miraculous enough after being a mere afterthought in the 2011 draft where he was chosen in the 32nd round, the 979th player selected overall, by the Blue Jays.

And now, starting his seventh year in Toronto, he is gone a week into the start of a season, a 30-year-old caught up in the continued youth movement of a Blue Jays team that grows more and more indistinguishable with each passing day.

In a deal that had been simmering for weeks, the longest-tenured Blue Jay was shipped out to the Giants in San Francisco in exchange for right-handed reliever Derek Law, utility infielder Alen Hanson and right-handed pitcher Juan De Paula.

Of the trio, only De Paula is considered a true prospect, a lanky 21-year-old native of the Dominican Republic who has now been dealt three times over his four-year professional career.

Later in the day, Toronto swung another deal when it acquired speedy outfielder Socrates Brito from the San Diego Padres in exchange for minor leaguer Rodrigo Orozco.

For the 2019 Toronto Blue Jays, brighter days are ahead ... almost

Previously: Remembering a Blue Jays season that many would prefer to forget

With Pillar gone, it cleared the way for 24-year-old Anthony Alford to be added to the 25-man roster and he was in Pillar’s spot in centre field Tuesday night.

Pillar’s problem has always been with his wildly inconsistent bat, a career .260 hitter with a .282 on-base percentage who really wasn’t going to ever show much better than that.

With general manager Ross Atkins in the midst of a brick-by-brick rebuild of the Blue Jays and the probability that the team won’t be contending until several years down the road, it became apparent that Pillar, given his age, was an expendable piece.

Atkins said the trade was a necessity but not easy to do. “We’re not in a popularity contest,” he said. “We’re in a contest to win championships."

The trade left Justin Smoak as one of the few remaining Blue Jays with ties to the exhilarating back-to-back playoff runs of 2015 and 2016.

He was reduced to tears on Tuesday when talking about the departure of Pillar, one of his close friends on the club.

“He’s great, man,” Smoak said. “Good teammate − Superman, whatever you want. He’s a guy you want on your team.”

Twitter blew up as Blue Jays fans learned of the trade, the vast majority expressing remorse that Superman was skipping town.

Ever gracious, Pillar spoke to a group of reporters outside the Blue Jays clubhouse at Rogers Centre Tuesday afternoon before heading to the airport to catch a flight to Los Angeles, where the ​Giants are playing a series against the Dodgers.

He, too, was in tears when he was asked what message he would like to express to the fans for their unwavering support over the years.

“There’s so much,” he said, his voice faltering. “I mean the biggest thing is just thank you. They’ve been great to me, they’ve been just supportive of a lot of things I’ve gone through on the field, personally a lot of stuff I did off the field. I got a chance to live my dream.

“I know I got called up as a 24-year-old kid that probably had no intentions of getting to the big leagues, was able to have my debut here in Toronto. I’m leaving here as a 30-year-old man with a wife and a kid and just a lifetime of memories.

While he was elevated to superhero status by his fans, Pillar said he was anything but the man of steel. However, he was thankful that the city, and the country “kind of allowed me to almost become a mythical kind of superhuman baseball player.”

Blue Jays fail to turn things around against Orioles
April 2, 2019 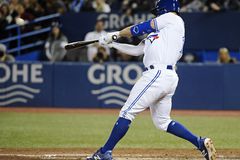 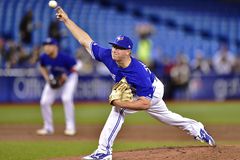 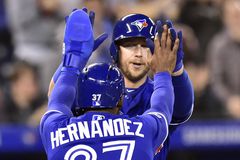