The parking lot was nearly deserted and the grandstand was empty for the 161st running of the Queen’s Plate on Saturday. The betting windows were closed and the bare pavement at Woodbine Racetrack, usually littered with losing paper tickets, glared. The Northern Dancer Room, where the Queen had high tea in 2010, was shut. The bugler’s call to the post sounded lonely.

On a day when 20,000 spectators should jam the place, there were only a few hundred.

A station was set up where guests' temperatures were taken before they came in. Signs reminded people, as few as there were, to maintain a safe physical distance. Women in beautiful dresses and fancy hats had wide smiles occluded by facial coverings. They were mandatory to prevent the spread of COVID-19.

A classic sporting event was cut to bare bones by the pandemic.

When he arrived for work in the morning, James Lawson, the chief executive officer of the Woodbine Entertainment Group, noted a lack of energy and excitement that usually accompanies Canada’s most important horse race. As they walked into the building, he told his wife, “This is really sad.”

If anything, it was a spectacular feat to stage this race day. It took months of planning and collaboration with government officials to open the track in early June. Woodbine hired a doctor as a consultant, produced its own 35-page health-and-safety guide and developed its own protocols. Of the thousands of horsemen and horsewomen and trainers and grooms and jockeys on the premises, not one has been diagnosed with the novel coronavirus.

A former hockey player and the former commissioner of the CFL, Lawson has run the Woodbine group for 5 1/2 years. The $1-million Queen’s Plate is its signature event. It is older than the Kentucky Derby and the Stanley Cup, and has been contested annually through an outbreak of the Spanish flu and world wars.

In April, Lawson promised his staff that, one way or another, there would be a Queen’s Plate this year. It was to have been held on June 27, but was pushed back until Saturday.

The race was presented without the usual frills. Missing were Mounties dressed in serge on horseback, part of the usual prerace procession. Brad Paisley didn’t play a concert as he did three years ago. Her Majesty was safely ensconced at Balmoral Castle.

The Honourable Elizabeth Dowdeswell, Ontario’s Lieutenant-Governor, sat beside Lawson trackside in the Royal enclosure. As is tradition, The Maple Leaf Forever, was sung, but few joined in.

Most in attendance gathered to watch the race on the track apron. There was room for just about everybody on the rail. In any other year, people would be elbow to elbow and it would be nearly impossible to move around.

Because of the U.S.-Canada border closing, the usual American jockeys couldn’t make it. Neither could the dozen or so horse racing writers who travel up. The horses are the stars here, and they didn’t seem to notice anything out of sorts.

Mighty Heart, a three-year-old owned by Lawrence Cordes, romped down the stretch and easily won the 1 ¼-mile Plate in 2 minutes 1.98 seconds, the second-fastest time in the event’s history. A 13-to-1 long shot, Mighty Heart lost his left eye in a paddock accident at two weeks old but breezed to a 7 ½-length victory under Daisuke Fukumoto. An even-longer shot, Belichick, finished second, with one of the favourites, Clayton, third.

Both the winner and second-place horses are trained by Josie Carroll. She is the only female trainer to win the Queen’s Plate, and has now done it three times.

This time, though, as 14 horses thundered down the stretch, the race call by track announcer Robert Geller echoed without the buoyancy of a crowd.

“We missed the fans,” Carroll said. “There is nothing like that moment when your horse has won and gallops past the grandstand to cheers.”

Eurico Rosa Da Silva, who won the Queen’s Plate twice, provided commentary for the race for TSN. He retired as a jockey after last year.

“This is such a big race, that you usually feel the energy,” said Rosa Da Silva, who won in 2010 on Big Red Mike and bowed twice when he got to meet the Queen. “I don’t feel empty, just different.”

As he does each year, Lawson sent a message afterward to Her Majesty, who has been at four Queen’s Plate races. She owns race horses and stays up into the night on Queen’s Plate day to see who won.

“I think we’re all in a bit of a funk, but it will be a day we’ll remember,” Lawson said. “I don’t think we have a grasp of the historic significance of what went on. It is a moment we will be proud that we pulled off.”

After the Queen’s Plate there were three trivial races still to run, and with the day’s big event done, only a few people lingered to watch. The quietest day at the race track became quieter still. 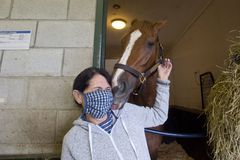 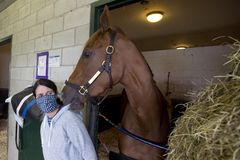 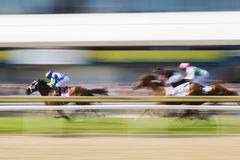