Cathal Kelly
Published May 30, 2021 Updated May 30, 2021
For Subscribers
Comments
Text Size
Please log in to listen to this story. Also available in French and Mandarin. Log In Create Free Account

Since he’s new around these parts, Nick Foligno has never experienced the Maple Leafs during a core meltdown.

Foligno’s a veteran and a lifer who grew up in the game. You’re hard pressed to imagine a situation he hasn’t seen or heard about, at least second-hand. That’s the reason Toronto got him (and Wayne Simmonds, and Joe Thornton, and Zach Bogosian).

They are all there to provide counselling services to colleagues when things go sideways. They’re the designated adults.

And then you see Foligno in the post-game after the Leafs have blown another one. His eyes are like saucers. His thoughts are disconnected. He’s rambling.

After bouncing around for a couple of confusing minutes, Foligno ended with this all-timer: “It’s time for the words to stop, the clichés to stop. It’s Game 7. Time to put it all on the line.”

That’s when you knew. That after losing Game 6 to the Montreal Canadiens, the Leafs are doomed.

And so he lost the puck.

These aren’t failures to perform. They’re overcompensation. The Leafs are thinking so hard about not getting it wrong, that’s what they end up doing. Malcolm Gladwell called this the difference between panicking and choking. The Leafs are choking their way out of this series, one bad pass, one soft shift, one weak link at a time.

When you’re up 3-1 against a team you had lapped and then find yourself windmilling your arms over the cliff’s edge, someone is to blame.

A more supple organization would assign that blame and move on quickly. The Leafs don’t do that. On this team, the blame never lands anywhere.

For instance, Mitch Marner is to blame. He hasn’t scored a goal in six games; He didn’t score a goal in five playoff games last year; Fifth season; $65-million deal; That is bad math.

Would anyone on the Leafs who wears a tie to work ever say that in public? Heaven forfend. This isn’t poor Marner’s fault. It’s somehow a collective failure that he has been individually mediocre. At worst, this is a wonderful learning opportunity.

The same way that if you just forget to go to work for a week, your boss will call you up and say, “The important thing is what you learned from this. What did you learn?” “I dunno. Nothing?” “Great job. Keep it up.”

No one’s talking about ripping Marner in half. How about a gentle reminder that he is in danger of getting a reputation.

Auston Matthews, the league’s leading goal-scorer this season, has one goal. That’s disappointing. But to hear the Leafs talk about it, it’s what you don’t see that matters. Matthews is contributing intangibles.

Sadly, five intangibles doesn’t equal one goal in hockey’s scoring system. The guy is paid to score. If he doesn’t score, he isn’t doing his job. But no one will say that out loud.

You could go up and down the roster with this exercise, but that pair earns the big money, so the focus is on them.

No one wants to alienate the two big men on Toronto’s campus. As Leafs’ head coach, you are allowed to lose games. Everyone’s used to that. But you can’t alienate your stars or they will say something passive-aggressive about you on Instagram and then what are you going to do?

Has anyone considered that maybe these guys need to see a flash of the red cape? You’ve spent five years stroking them. How about a little verbal slap? Nothing hard. Just a wake-up tap.

But no. The blame gets filtered around the room until it burns off like mist. How many times have you heard a Leaf say something like, “It’s not about one guy. We win and lose as a team?”

That’s a lovely motto for Little League, but it doesn’t work for a professional sports outfit. In business, someone is always to blame. But if you’ve spent the past five years reading the annual reports coming out of the Leafs’ locker room, you know that no one who plays hockey in Toronto is responsible for the quality of hockey in Toronto.

A few days after another lost season, Leafs general manager Kyle Dubas comes to his end-of-season presser carrying a cross. He spends an hour nailing himself to it. Then we start the process all over again.

We’re not quite there yet. If the Leafs win on Monday, all will be forgotten.

Do you believe that’s what’s going to happen? Tell the truth. That having handed the Canadiens two overtime gifts in a row, the Leafs are suddenly going to discover the champion within? No, you don’t. Neither do the Leafs. You could see that much in Foligno’s eyes. That problem goes well beyond one more playoff disaster.

Because if you can’t close a series you had in the bag and nobody is to blame for it, why would you ever expect anything to change?

Habs give boisterous Montreal crowd reason to cheer with 3-2 overtime win against Maple Leafs
May 30, 2021 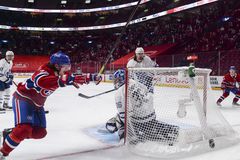 Canadiens to face rival Maple Leafs in front of fans in pandemic first for Canadian NHL teams
May 29, 2021 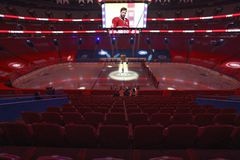 Maple Leafs living ‘game to game’ as they prepare for Game 6 against Canadiens
Subscriber content
May 29, 2021 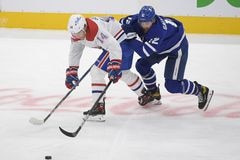