The Maple Leafs power play drew more boos, groans and grumbles than cheers at Scotiabank Arena on Thursday. They trailed 1-0 in the third period despite the generosity shown by the reprobates from Las Vegas, who had been nabbed by the refs for hooking three times and interference and tripping once each. Toronto bumbled through those opportunities with an extra player much as it had often recently. Shots were botched. Passes were flubbed. Too much time was wasted as the Leafs tried to get out of their end.

Then the Golden Knights got caught at tomfoolery again – this time, a holding infraction on William Carrier – and the Maple Leafs received another man advantage with 13:16 left.

As a television timeout was taken, the potential to be ridiculed by a raucous crowd and suffer a tough loss loomed.

Behind Toronto’s bench, Mike Babcock tried to rally his nervous troops. At this point, the coach had done just about everything imaginable other than recite novenas to get the power play untracked.

“Come on, lighten up here, fellas,” Babcock told them. “Let's just go out there and breathe a little bit and do what we're supposed to do.”

Perhaps it was his words. Perhaps it was his timing. Perhaps the Maple Leafs were overdue. Soon after, Auston Matthews tucked a shot off the crossbar to tie the game 1-1. John Tavares then completed the 2-1 comeback with a goal 2:47 into overtime to end an exciting duel between goalkeepers Frederik Andersen and Malcolm Subban.

Andersen slid and slipped and snatched his way to 37 saves in Toronto’s team-high third successive win. Subban, a substitute getting a rare start, was nearly as good, stopping 35 of 37. Not even Marc-André Fleury, Vegas’s star netminder, could find much fault with that.

The victory improved the Maple Leafs to 9-5-3 after a shaky first month. The Philadelphia Flyers at home Saturday night and the Blackhawks in Chicago on Sunday stand between them and their possible first lengthy run of the season.

Anytime now, they are likely to suddenly score two or three when they have man advantages. It happens to teams every year. They go through droughts and then erupt. Largely, that is a matter of numbers and luck.

Something must change, however, for it to be sustainable. Opponents have begun to catch on to Matthews letting a wrist shot rip from the circle on the right side of the net. There has to be better movement of players and puck and a clearer plan of attack.

“We were a bit stagnant in the first two periods,” Matthews said after netting his team-leading 13th goal. “In the third, we pretty much said, ‘What do you have to lose?’ Let’s move around; let’s get the [guys on the] penalty kill thinking more.

“I thought we did a really good job with different guys going to different areas and reacting, playing off instincts. Not just drawn-up plays, but reacting off one another, using each other and making plays. We spread them out a little bit and we were able to score.”

It has been a good week for Toronto. Two close wins, a couple of days off and a bit of practice time. It can be seen in a lighter approach in the dressing room, with Cody Ceci and Travis Dermott poking fun as they pass around a Morgan Rielly bobblehead. With team president Brendan Shanahan suiting up to fire pucks at a practice goalie. With Zach Hyman’s laughter as he holds court in front of his stall and gets nearer to a return from knee surgery. They are 4-1-1 in their past six and about to head out on an extended trip. The pressure that comes along with having great expectations and playing mostly at home has begun to wear off.

“Our team's doing pretty good,” Babcock said this week. “We seem to be getting some traction and there is more juice in our group.

“You know, I think the biggest thing is we're getting to know each other. I've said this a number of times, and I don't know if anyone believes it. But it is easier to play with people you know and over a period of time you get there. It appears the guys are starting to have fun having fun together.”

With Matthews, Tavares, Mitch Marner, William Nylander and Rielly they have a highly skilled and expensive lineup that needs to excel on the power play. The millions don’t matter as much as the numbers do.

In recent stretches, they have gone 1 for 24, 2 for 27 and now 3 for 33 with an extra player on the ice. They rank in the bottom third in the league in both power plays and penalty kills. Their special teams have not been special at all. 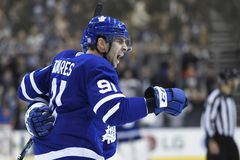 Frederik Andersen is more than a goalie – he’s the Maple Leafs’ rock
November 6, 2019 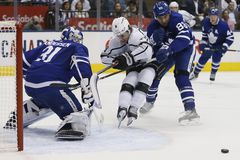