It is one thing to score your way out of trouble in October, when NHL teams are still working their way out of the summer layoff.

It is quite another to try to do so in mid-March when those teams are now in playoff mode – either fighting to preserve a post-season spot or in a desperate push to get one.

The Chicago Blackhawks may not be the same team that won three Stanley Cups between 2010 and 2015 but they are making a run at a wild-card playoff spot in the NHL’s Western Conference and played like it in winning their fourth game in a row Wednesday night. The lackadaisical Leafs spotted them a four-goal lead in the first period, made a late push that made for a wild third period, especially in the last couple of minutes, but fell short in losing their second consecutive game, this one by a 5-4 margin.

“At the end of the season, it’s pretty much playoff hockey now,” said Leafs star Auston Matthews. “We have to step up our game, especially to start games. That’s two in a row for us we haven’t done that. It’s cost us big time. We crawled our way back. It just wasn’t enough.”

The sting was even worse because as the Leafs were losing two in a row this week, the Boston Bruins finally cooled off and lost two games in a row as well. That left the Leafs, despite an awful loss to the Tampa Bay Lightning on Monday, four points behind the Bruins with a game in hand before the Chicago game. But now they are still four points behind and even in games at 70 in the fight for second place in the Atlantic Division and home-ice advantage in the first round of the playoffs, where they will almost certainly face the Bruins.

Matthews said the Leafs’ two-game slide was “just a blip” but admitted improvement is needed, and fast.

“We hold each other accountable in this room,” he said. “I think we’ve got to look across the room and obviously step it up. That’s unacceptable. We can’t be doing that at this point in the season with these important points on the line.

Oh, the Maple Leafs can nod to the necessity of a sound defensive game. Like during the morning skate on Wednesday, a few hours before they met the Blackhawks.

Head coach Mike Babcock ran his charges through their defensive-zone coverages, seeing as how they had Tuesday off after getting shellacked by the league-leading Lightning following the Leafs’ tiring trip through Western Canada last week.

But it had the feel of schoolboys cramming for their final exams on the front steps five minutes before the bell. It worked out as well as that usually does, too.

“It’s definitely something that has to be a priority for us,” Leafs centre John Tavares said of the defensive game. “We address it every single day, it’s an important focus.

The Leafs let the Blackhawks run up a 5-1 lead and tried to reel them in during an entertaining third period. When Tavares scored an empty-netter with one minute and 31 seconds left to cut the Chicago lead to one things got hairy – the Leafs put another one in but it was waved off when the net came loose. However, it was ultimately too little, too late.

The Leafs may have been thinking this one might turn out like their last game with the Blackhawks, a 7-6 win back on Oct. 7 in Chicago when both teams traded goals all night with the Leafs winning on the last one in overtime.

The Leafs tried to recreate that in the third period when Blackhawks goaltender Corey Crawford was forced out of the game due to illness. They scored a couple of goals on his replacement, Collin Delia, pulled goaltender Garret Sparks for an extra skater with more than three minutes to play in the third period and gave the Blackhawks some uncomfortable moments. But that was all they could do.

The Leafs’ defence was just as loose as it was on Monday when the Lightning scored six goals.

The shining example of this came on the Blackhawks’ fourth goal with one minute and 14 seconds left in the first period. By this time it was established the Leafs were not going to show up for this game either.

The play started when the puck was dumped into the corner of the Leafs’ zone. Four of the Leafs on the ice decided it would be a good idea to head to the puck. This included defenceman Nikita Zaitsev, who tried to clear it along the boards.

But he fumbled the attempt as his teammates watched and the puck went to Chicago forward Dylan Sikura. It was hard to miss Blackhawks winger Brandon Saad standing all by himself in front of the net so Sikura sent the puck to him for an easy goal.

Aside from Saad, Alex DeBrincat, Duncan Keith, Brendan Perlini, Dominik Kahun also scored for Chicago. Andreas Johnsson, Matthews and Morgan Rielly (on the power play) scored the other goals for the Leafs in their attempted comeback.

Leafs goaltender Frederik Andersen was not up to his usual excellence but he was by himself much of the time. Babcock gave him the mercy hook after the first period in favour of Sparks, just as he did on Monday night.

Now, it must be said the Leafs do have some excuses. They were loath to use them on Monday night, especially the one about it being their first game at home after a week-long road trip to Western Canada.

However, the body count is starting to pile up. Zach Hyman, who drives the Tavares line, was too ill to play and joined Kasperi Kapanen on the sidelines. Kapanen was said to be ill when he missed Monday’s game but that diagnosis was changed to a concussion from last Saturday’s game. Also missing are defencemen Jake Gardiner (back) and Travis Dermott (shoulder).

The Leafs once again rejected the missing players as an excuse. “I don’t think so. I think we’ve got plenty of capable people here,” Tavares said.

It should be noted there might be something odd going on at the Leafs’ arena. For the second time, someone had to leave the game due to illness. On Monday it was one of the linesmen. On Wednesday it was Crawford, who left after the second period. 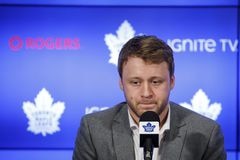 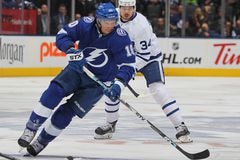 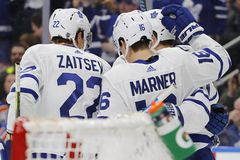