At the time of the disastrous 1920 trade that sent Babe Ruth to the New York Yankees from the Boston Red Sox, it was judged a fair deal on both sides.

Ruth was the precursor to all those present-day wantaway stars who demand something and are prepared to go on strike in order to get it. In his case, it was a raise to US$20,000 – equivalent to roughly US$250,000 today.

Boston would not budge. Once its fans had got an earful of Ruth’s complaining, the team rubbished his name as a malcontent and hit the ejector seat. The Yankees paid a hundred grand for him. It was a time when large, round numbers still impressed people.

The only contemporaneous flag raised in general alarm came from The New York Times: “It marks another step toward the concentration of baseball-playing talent in the largest cities, which can afford to pay the highest prices for it.”

The Times, in its stiff-necked way, judged this “a bad thing for the game.”

(Your periodic reminder – nothing really changes.)

The effect on Boston was immediate and, after a while, supernatural. What had been the best team in baseball became one of the worst, and for a long time.

Looking back on it, the Red Sox have no excuse. They sold the greatest player in history, then still only 24 years old, for the cost of a really nice house. But they eventually absorbed the lesson.

Big teams are buyers. Buyers are big teams. And the biggest of all puts itself into direct opposition to the City of New York.

That’s how we get to right now and what, on paper, looks to be the greatest Red Sox roster in history.

They will finish the year in the vicinity of 110 wins, the most in their history. In the so-called era of parity, they are 60 games ahead of the fifth-place Orioles. Boston could have quit playing in the middle of June and still had a better year than Baltimore.

The Red Sox are so electric, so talented and so much fun to watch that it’s got to the point where it is hard to root against them. If you’ve spent any time in Boston, you’ll know how remarkable that sentence is.

A lot of people get the credit for putting this club over the top, but the one who should get the lion’s share is owner John Henry.

Henry is an Illinois investment banker and St. Louis Cardinals fan who has made some of the shrewdest sports business moves in modern history.

He spent years trying to buy his way into various leagues with various teams and eventually got a small part of the Yankees (nobody talks about that any more). He bought the Florida Marlins low and sold them high. He parlayed that coup into purchasing the Red Sox along with partners.

Later, he’d follow the American wave into the English Premier League, buying Liverpool at a low ebb. That team is now the Red Sox of Europe – a formerly great club floating back to the top, largely by dint of charisma.

Turning around one legendary franchise might be down to good luck. To do it twice means there was a plan.

Henry is simultaneously a traditionalist and a progressive. Shortly after arriving, he tried to give the Moneyball poster boy Billy Beane a blank cheque to run the team. Beane refused, so Henry found a younger, cheaper version.

He made the Boston-based godfather of sabermetrics, Bill James, a consultant.

On the flip side, he refused to press for a teardown or major renovation of Fenway Park, although it is now just about the last stadium on the continent without luxury boxes, interactive concourse attractions, dedicated parking or any of the other things that turn a stadium into a cash register.

Under Henry, Fenway remains a concrete pit. A delightful pit, but a pit nonetheless. The tunnels to the dugouts are flooded half the time, and you must walk over rotted planks to wade through them.

I once came to the park before the gate went up and watched a guy filling two-dozen jugs of “natural spring water” with a garden hose. When he caught me staring at him, he pointed at the jugs, then at the hose, then at himself and shrugged. That’s Fenway.

If Henry is the brain and Fenway the body, outfielder Mookie Betts is currently the heart.

The Red Sox have a long history of stars you could only love if you lived in Boston. Whereas anyone who takes one step into the Yankees clubhouse is turned – presto whammo – into a raconteur, Boston has traditionally had the opposite effect.

Roger Clemens? Ditto to the maximum.

Betts is the latest tip of Boston’s charm spear. Following in the paths of Pedro Martinez and David Ortiz, he is an adorable, Stan Musial type – all lightness.

During spring training this year, Betts was interviewed by a TV crew in the midst of the game while playing right field. The ball was hit over his head. Betts took chase. While he ran, he yelled into the hot mic, “I ain’t getting this one, boys!”

Ted Williams might have done that. But after the game, he’d have gone up to the booth and punched someone.

In high school, Betts was an exceptional two-sport competitor – baseball and bowling. Maybe that’s why he lasted until the fifth round of the draft. A true five-tool player, he should be this year’s American League MVP. His slash line is approaching Ruth-ian standards – .346/.437/.643.

The Red Sox are stacked with these sorts of guys – homegrown, high-ceiling and producing right now.

The young core of the Red Sox lineup – Betts, shortstop Xander Boegarts, outfielder Andrew Benintendi – were all born within a few months of one another. Barring injury, they will get better. The rest of the AL East ought to look upon them and despair. Boston is built to last a long time.

The more mature section of the roster was acquired at a much greater cost.

Where Toronto wouldn’t go to the trouble of offering him a contract, Boston happily overpaid for free-agent starter David Price. It gave J.D. Martinez US$110-million to become a designated hitter. It gave up a boatload of prospects – including one it had paid a total of US$63-million in signing bonus and taxes – to get starters Rick Porcello and Chris Sale.

Every time a team talks about the need to save money, you look over at Boston.

It is owned by a rich (but not stupidly rich) guy. It plays in a stadium that would be high-school-sized in Texas. The city’s population – just more than 600,000 – makes it, by major-league standards, a medium-sized market. The Sox have a good TV deal, but not so much better than everyone else’s.

The Red Sox may occasionally be bad, but they can never be rebuilding. Retooling? Sure. That’s a year, maybe two. But after that, the fans will revolt. There are no equivalent terms in Bostonese for “cost savings” or “fiscal realities.”

In some strange way, Boston has become the new New York – crowd pleasing, expensive and indifferent to anything but championships.

If this postseason is shaping up as one of the most nostalgic in memory (the only team in there cluttering up the old-timey feel is Colorado), the epitome of that urge is Red Sox vs. Yankees.

They haven’t faced each other in the playoffs since 2004, when Boston came back from being down 3-0 and Ruth’s hex was reversed.

Because of the way baseball is organized, they’ve faced each other in October only three times over the course of a century.

If this is the sports world’s greatest sports rivalry – better than Barcelona-Real Madrid, Lakers-Celtics or Canada-Russia – it is because they so rarely face each other when it really matters. The scarcity breeds interest, as well as contempt.

In all likelihood, that will be changing. They are the class of the American League, rather than just the East, with rosters young enough to grow into their dominance. Boston vs. New York could be the storyline that dominates baseball for 10 years.

This year, the Oakland A’s stand in the Yankees’ way of making everyone’s fantasy matchup happen. With due deference to Oakland and its fans, the right thing to do here would be concede the wild-card game. For all the rest of us. It’d be remembered not just as a great act of charity.

Since they won’t, we live in hope.

You don’t have to root for Boston or New York. In fact, you shouldn’t. That’s called front-running. It’s wrong.

But you can admire the way history – especially as it applies to these two teams – has a way of winding back around to the beginning. 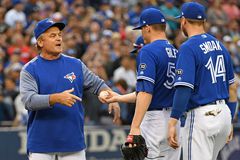 Blue Jays see Gibbons off with a win over the Astros
September 26, 2018 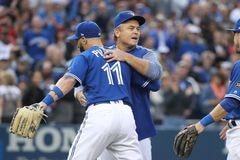 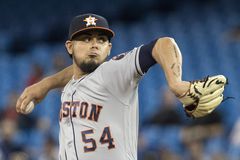