Max Baer, the most feared heavyweight fighter of Depression-era boxing, made his reputation killing a man.

It was an ill-tempered 1930 bout in San Francisco with a fighter named Frankie Campbell. Baer was 21 years old. Campbell knocked Baer down in the second round and, thinking there would be a count, began walking toward his own corner.

Baer popped up, gave chase and, as Campbell was turning to face him, hit him so hard that Campbell told his corner, “Something feels like it broke in my head.”

Though the fight would continue for three more rounds and the worst of the beating was delivered in the fifth, that blow was the one people remembered.

It took half an hour to get Campbell, 26, off the mat at the end. He died the next day. A doctor would describe Campbell’s brain as being “knocked completely loose from his skull.”

Baer was briefly jailed, but no charges were filed. The man who refereed the fight was cast as a public villain. Baer was suspended, and an investigation launched. Since no rules or conventions of the fight game had been broken, it went nowhere.

There was a great lament about the violence of boxing, but since no one had a good answer to the problem, people stopped asking the question.

As Jeremy Schaap would later write of Campbell’s death in his book Cinderella Man: “The fact was, and remains, that even in the cleanest, best refereed bout, it is possible that one of the fighters will die.”

No rules were broken. There were no obvious errors by the referee, nor could he be judged guilty of inattention. When Stevenson was knocked out in the 11th, he was winning the fight on points.

But when it went wrong, it did so quickly. Ukrainian challenger Oleksandr Gvozdyk put Stevenson under heavy pressure late in that last round. In the final flurry, Gvozdyk landed seven square shots to the head. The last of them buckled Stevenson’s knees. His body went limp against the corner ropes, and he puddled to the canvas.

Stevenson’s hands had been up until a moment before. Had the referee called it then, we would be reading about how an official had stolen a belt from the Canadian.

But just a few seconds of undefended violence from men trained to hurt people can have an awful cost.

As of Monday, Stevenson remains in an induced coma. His condition was upgraded on Sunday to stable from critical. The extent of his injuries is not yet known, so there is no prognosis for recovery.

Stevenson is 41 years old. At the least, his career is over. If that turns out to be the worst of it, you might consider this a small miracle.

Had he won or lost unremarkably, no one would be talking about Stevenson’s bout. Few fights seep into the wider public consciousness these days. In order to do so, there must be something shocking or lurid about them.

Wilder, an American, is the human cash machine everyone wants to get into the ring with world champion Anthony Joshua. This was meant to be a lucrative tune-up fight.

Fury, a Brit, is a delightful and often tortured oddball in the midst of a comeback after a nearly three-year layoff. His appeal lies largely in comic relief and the ability to absorb punishment.

But Fury took the fight to Wilder, frustrating the far better-conditioned athlete. He had the bout won until the 12th round.

That’s when Wilder knocked Fury unconscious with a vicious combination. Fury went to the mat like a log tipped on end, eyes rolled back in his head. Somehow, he recovered. The fight’s TV analysts were briefly speechless as he rose to his feet.

“I don’t know how he got up,” Wilder said afterward.

Fury attributed his resurrection to “a holy hand” upon him.

You could see in the referee’s gestures that he wanted very badly in that moment to call the fight. But Fury rested both hands pleadingly on the smaller man’s shoulders, shaking him gently, and it was allowed to continue. The bout ended in a split decision – a sort of victory for Fury, and also a kind of loss.

By the next morning, people who do not care about the fights were talking about this one. The thrust was not the touted contender’s final-round comeback, but Fury’s verging-on-inexplicable toughness.

Have you ever been knocked out by a blow? How about two of them, point blank, from a 225-pound man who is close to the best in the world at throwing them?

Getting back and steady on your feet is not a 10-second proposition. For most of us, it’d be a matter of weeks.

But Fury did it. He’s been a belt-holder, but that recovery will in all likelihood define his boxing career. It’ll be the fount of whatever reputation he enjoys in retirement – the man who would not stay down.

On the other end of the spectrum, we have Stevenson – the one who could not get up.

The tension in boxing exists somewhere in the middle. However much we talk about the science and its sweetness – and there is plenty of that – it is the brutality of fist-fighting that fascinates viewers. It’s the idea that people are putting not just their pride or livelihoods at real risk, but also their existence.

On some occasions, that will result in glory. In others, inevitably, tragedy.

Often forgotten when the latter happens is its effect on the men who delivered the crippling shots.

After killing Campbell, Baer would become one of North America’s first athletic rock stars. He was the heavyweight champion – back when that really mattered – dated movie stars and made a lot of money.

“I made a lot of mistakes,” Baer told a sportswriter upon retirement. “But [the Campbell fight] is the one I wish I could take back. I’ll regret it as long as I live.” 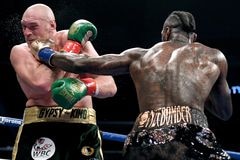 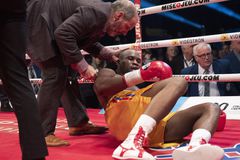