Mitch Marner erased the social-media apps on his cellphone before the playoffs started. The Maple Leafs star said they would otherwise have become a distraction.

He hasn’t actually seen the comments from frustrated fans who have lashed out at him in the past day or so, but he has heard.

It is not bad enough that Toronto blew a 3-1 lead in its playoff series with Montreal. To make matters worse, Auston Matthews and Marner, the team’s two biggest stars, combined for just one goal in seven games.

Marner also committed several glaring errors that contributed to the defeat. Doubts are being expressed about his relative value – he makes $US10.9-million a year – to the team.

“We had three cracks [at eliminating the Canadiens] and it just sucks that we didn’t get it done,” Marner said Wednesday on a virtual call with journalists as players were made available for interviews before they headed out for the summer. “We had the talent, we had the will and we had the fight, but the end result is not what we wanted. No one feels good about this.”

Marner was contrite. He chose his words carefully and haltingly.

Sure Maple Leafs fans are upset, but it’s not enough to blow the team up

He and Matthews and other core members of the Maple Leafs have yet to win a postseason series. They remain relatively youthful, but that no longer can be used as an excuse. They have lost in the first round in four of the past five years and failed to reach the Stanley Cup playoffs in the other.

The previous time Toronto advanced to the second round was 2004.

“We had a chance to finish out the series,” Marner said. “It was a terrible outcome. At the end of each year, we are sitting here feeling awful.”

Marner and Matthews had 61 goals between them during the regular season but only the one on 54 shots against Montreal. Marner maintains that he and Matthews got plenty of opportunities but were simply unable to cash them in.

“I thought we had great looks,” Marner said. “Our line did a lot of great things.”

The Maple Leafs won their first division title since 1990, but it occurred without having to play tough opponents such as Boston or Tampa Bay. The league was realigned because of COVID-19 in such a way that it was very favourable for Toronto.

After losing the opening game of the series, three victories followed – and the Maple Leafs were inches from accomplishing a feat that has hung over them like a grey cloud. Then they imploded.

“It all boils down to the same thing,” defenceman Morgan Rielly said. “To not achieve the ultimate goal makes it a lot worse.”

Rielly said there were successes that can be built on, and lessons to be learned from losing. But that really isn’t anything new.

“I have been reflecting on a spectacular season that had a disappointing ending,” Marner said. “We didn’t live up to our own expectations.”

Matthews, who was selected as a finalist for the Ted Lindsay Award on Wednesday, still seemed to be at a loss to explain what happened. Edmonton’s Connor McDavid and Pittsburgh’s Sidney Crosby were also nominated for the trophy, awarded to the player fellow players believe is the most valuable on any team.

Matthews led the NHL with 41 goals during the regular season.

“Everybody is still frustrated and feeling devastated,” Matthews said. “I don’t think I can offer much more than I did the other night. I don’t think much has changed.

“I hold myself to a high standard. To not be able to produce when I want to is frustrating.”

Among the older players, Joe Thornton, who signed for one season last fall, said he has yet to consider whether he would like to come back to Toronto.

“This came so suddenly that I really haven’t had time to think about it,” the 41-year-old said. “I feel really healthy and really good, but we’ll see. I have to take the time to be a dad right now.”

Jason Spezza, 37, had three goals against the Canadiens and said he would like to come back. Wayne Simmonds, another veteran who was brought in, is uncertain if he will return. The Toronto-born Zach Hyman, whose contract is expiring, said he would like to remain a Maple Leaf “if it makes sense.”

Goaltender Frederik Andersen, who fought injuries for much of the season, is unlikely to return. His contract expires and he lost the starting job to Jack Campbell as well.

“I’ve had five years here and really enjoyed my time,” said Andersen, 31. “Over all, I will definitely look back at these five years with a lot of good memories.”

The season ended with fans more angry than they have been in years. Part of that comes from the expectation caused by having a good regular season. Part of it comes from another failure at the end.

“It is hard for them,” Brendan Shanahan, the club president and alternate governor, said during a separate Zoom call. “We gave them hope, and they believed in us. They are heartbroken.

“Trust gets shaken at times like this for all organizations that don’t meet their expectations.”

“We have had painful lessons here over the years,” Dubas said. “The lessons are repeated until they are learned.” 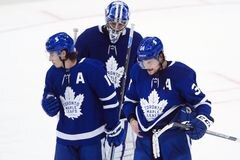 Up to 500 health-care workers will be allowed to attend NHL playoffs in Winnipeg
June 2, 2021 Opinion
Unexpected Jets-Canadiens matchup could be goalie duel for the ages
June 1, 2021 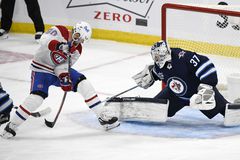