Talk about a New Year’s Resolution.

On Jan. 2, the St. Louis Blues found they had stumbled, slipped and fallen to dead last in the NHL – worse, even, than the dreadful and dysfunctional Ottawa Senators.

When the season ended on April 6, the Senators were dead last and the Blues – with a new head coach on the bench and an unknown rookie in net – had climbed all the way up to equal the much-celebrated Winnipeg Jets with 99 points. They met those same Jets in the opening round of the Stanley Cup playoffs and stunned the hockey world by taking the series four games to two.

The Blues then met the Dallas Stars, taking that series in seven games and now moving on to the Western Conference final, where they will meet the San Jose Sharks, winner of their own difficult best-of-seven series Wednesday against the Colorado Avalanche. The conference final will begin on Saturday in San Jose.

Tuesday night in St. Louis, the Blues won their second round in such dramatic fashion it might be mistaken for a game played in the imagination of a 10-year-old playing in the driveway, not Enterprise Center. The series against the Stars went to Game 7 and was settled in double overtime when 31-year-old Patrick Maroon batted in a loose puck after 19-year-old rookie Robert Thomas put a shot off the Dallas crossbar.

Maroon just happens to be a St. Louis native, the stands packed with friends and family, including 10-year-old Anthony Maroon, who burst into tears when his father scored the goal that sent the Blues on to the Western Conference final.

“As a kid, playing in a basement, on the street, you always think about doing this,” Maroon told reporters after. “It’s unreal.”

So, too, have so much of this spring’s playoffs been. Unreal, surreal or – in the case of the slopping officiating – really?

For the first time in NHL history, the top team from each conference and all division winners were eliminated in the opening round.

The absence of any Canadian teams, not to mention the serious lack of identifiable stars – no Ovechkin, Crosby, Stamkos – has made it difficult for Canadians not directly related to players to give a sweet dang about this spring’s playoffs.

But now comes this ultimate underdog story. Move over, Cinderella. Out of the way, Rudy.

The Blues are hardly a charismatic team. New coach Craig Berube is a former NHL enforcer who still looks more comfortable in the penalty box than at the podium. The hot goalie is 25-year-old Jordan Binnington, who was considered a career minor-leaguer until the Blues brought him up in late fall. By spring he was a finalist for rookie of the year. The rest of the team members are unfamiliar names. But they grind wonderfully and the NHL playoffs are as much for grinders as the regular season is for superstars.

The Blues have never won a Stanley Cup. They went to the final in their first three years, 1968-70, but never won a game. (The NHL foolishly made expansion teams their own division and kept the Original Six together in the other division.)

Only four times since have the Blues advanced to the third round, never again back in the final.

“A lot of people doubted us,” captain Alex Pietrangelo told reporters after the double-overtime victory. “I’ll tell you what – and I really do mean this – I get proud of this group more and more every single day.”

And every single day, more fans are embracing what Maroon called a “roller-coaster ride.”

Perhaps what happened at the SAP Center in San Jose the following night, Wednesday, wasn’t quite as dramatic, but, as Sportsnet play-by-play announcer Dave Randorf shouted out at one point, “Could you write a better script to start a Game 7?”

The story in San Jose was the return of much-loved captain Joe Pavelski, who had not played a game in the series after being knocked cold in a controversial collision in a previous Game 7 against the Vegas Golden Knights.

That play resulted in a five-minute major penalty to the Golden Knights’ Cody Eakin with the Knights holding a 3-0 lead halfway through the third period. With Pavelski in the dressing room getting eight stitches to the head, his Sharks scored four power-play goals and went on to win 5-4 in overtime to advance to the second round.

The play was highly contentious, as replays showed Eakin had indeed cross-checked Pavelski – likely not even a penalty in the playoffs – sending Pavelski into an accidental collision with the Knights’ Paul Stastny, which led to the awkward fall. In a most unusual move – even for these curious playoffs – the NHL subsequently apologized to the Knights for the bad call.

Even Pavelski thought it a bad call. “Was it a five-minute major?” he told reporters. “No, I don’t think it was. Am I glad they called it that way? Heck, yeah!”

Pavelski’s return to play, therefore, was a joyous event for Sharks fans. They roared approval when he stepped out for the warm-up, roared again when he lined up for the opening faceoff – and they blew the roof off the SAP Center when, six minutes into the game, he tipped a Brent Burns point shot into the Colorado net to open the scoring.

Later in the period he set up Tomas Hertl to put the Sharks ahead 2-0. The game ended 3-2 in San Jose’s favour, eliminating the Avalanche.

It was a series of great contrasts, the young, quick and exciting Avalanche against the establishment: veterans such as Pavelski and Joe Thornton, the quiet brilliance of Logan Couture (second in playoff goal scoring only to Alexander Ovechkin since 2010), solid defence in the likes of Brent Burns, Erik Karlsson and Marc-Édouard Vlasic.

The West will be settled in a battle between the established and the upstarts.

And the winner will move on to try to win the franchise’s very first Stanley Cup. 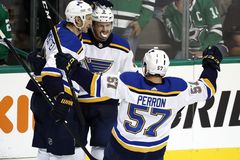 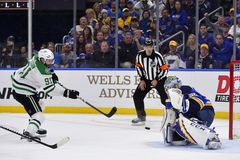 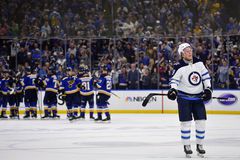