“For an expansion team to do what they have done is just unbelievable.”

He will turn 58 in a few weeks, yet the fit and still-boyish looking Boschman remains quickly recognized as he moves about his Ottawa-area neighbourhood – “so long as I run into the right demographic.”

That demographic would stretch back 25 years to the first year of the reborn Ottawa Senators and the final NHL season for the man who would serve as captain of the much-loved and much-beaten Ottawa Senators, dubbed by Sports Illustrated “the worst team” in sports franchise history.

More different than the Las Vegas Golden Knights you do not get.

It is hard to wrap one’s head around what the Golden Knights have accomplished in their first year of existence. The team opened its season with a remarkable tribute to the 58 victims of the Oct. 1 shooting in Las Vegas, the names of the dead emblazoned on the ice and the teams escorted onto the ice by first responders to the mass murder. City and team so rallied around the “Vegas Strong” cry that the team ended its regular season by “retiring” No. 58, raising a banner to the rafters with the names of each person who died in the tragedy.

Whatever it was that drove and inspired the Golden Knights, they finished that regular season first in their division, third in their conference and fifth over all, sporting a better record than 26 established NHL teams. They swept the impressive Los Angeles Kings in the first round of the playoffs and were tied with the San Jose Sharks at two wins each heading into Friday’s Game 5 in Las Vegas.

In the NHL’s modern era, which dates from 1967, there have been 26 new franchises awarded – the Golden Knights the only one to finish their first season with a winning record. Only six newly launched teams have made the playoffs, but that includes the four new teams assured postseason play when the league doubled in size to 12 teams from six for the 1967-68 season.

“I’m nothing but happy for them,” Boschman says, “because I remember how difficult it was for us.”

The Senators started up in the 1992-93 season. They and the Tampa Bay Lightning picked from a draft selection so thin Tampa’s general manager Phil Esposito compared it to being offered “snow in winter.” They held a rookie training camp and the leading scorer was an employee of the Ottawa Sun, sent to record what it was like.

The team’s best player, defenceman Norm Maciver, was claimed off waivers from the Edmonton Oilers just before the season opened.

The Senators won their very first game, 5-3 over the Montreal Canadiens, but went on to lose 70 games, including 41 on the road. When thieves stole the team’s video equipment but left the game tapes, assistant coach E.J. McGuire saluted them as “Burglars with taste.”

When Ottawa finally won an away game in April, against the New York Islanders, the hero was Boschman, who had a hat trick in the game and was met at the team bus by the entire team bowing down and chanting, “We are not worthy!”

For Boschman, a first-round draft pick of the Toronto Maple Leafs in 1979, it was a “frustrating” experience to play for a team renowned for its losses. After stints with the Edmonton Oilers and eight seasons with the Winnipeg Jets, he had come to Ottawa from the New Jersey Devils, then considered a competitive team with potential.

By season’s end, however, the team drubbed “Road Kill” by some media had developed strong bonds through the ordeal, the stories that once caused shudders soon told with delight. “It was a really solid bunch of guys,” says the first captain. “We didn’t have the talent, but we did work hard.”

Boschman chose to stay on in Ottawa post retirement, he and Nancy raising three boys. Nancy passed away in 2006 after a long battle with cancer and he later married Andrea, who also has three children. Today he serves as president of the Ottawa Senators Alumni.

Where bitterness might be expected when comparing the Golden Knights’ glorious first season to the Senators’ odious first outing, there is absolutely none. Quite the contrary, in fact.

“It’s great,” he says. He watches the Golden Knights and cheers them on, in no small part because of long friendships with Las Vegas general manager George McPhee and senior vice-president of hockey operations Kelly McCrimmon. Boschman and McCrimmon were junior hockey teammates on the Brandon Wheat Kings.

“The league learned a lesson,” Boschman says. “Las Vegas paid 10 times [US$500-million] what Ottawa paid [US$50-million] for a franchise. They had to give them every opportunity to get decent players.”

McPhee has said he wanted speed and youth and character players with “low ego.” The league ensured that good players would have to be made available and, unlike the case of Tampa Bay and Ottawa a quarter century ago, the Golden Knights faced no competition for those good players made available. The salary cap also worked to their advantage. When the Pittsburgh Penguins decided they couldn’t afford to keep goaltender Marc-André Fleury, the most easy-going player in the NHL was off to Las Vegas and, despite early injuries, became pivotal to the team’s success. Salary-cap problems led to the Nashville Predators making James Neal available, and Neal would score 25 goals for the Golden Knights.

McPhee picked up a bargain when he claimed Jonathan Marchessault from the Florida Panthers. Marchessault, who makes a mere US$750,000, would have a career-best 75 points. A total of 13 players would have career years with the team.

The greatest coup, however, was landing William Karlsson from the Columbus Blue Jackets in a complicated exchange in which McPhee agreed not to draft two players Columbus was anxious to keep and also take over the contract of a veteran injured forward. Karlsson, little known but considered a good defensive forward, would score 43 goals in the regular season and become a force in the playoffs, with four goals and five assists heading into Friday’s match.

“They’re way ahead of the curve,” Boschman says in admiration of McPhee and McCrimmon. “It’s a totally different game today. It’s all about speed. The game is so fast now.”

McPhee hired Gerard Gallant as head coach and Gallant is now the favourite to win coach-of-the-year honour. His players play a high-tempo, strong fore-checking game that allows for something far too many NHL coaches appear to despise: risk.

Team Canada loses to U.S. in shootout at hockey world championship
May 4, 2018 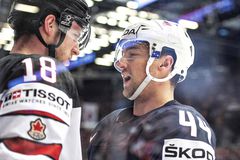 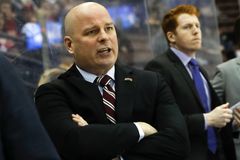 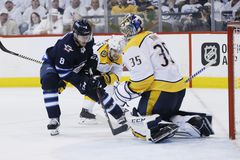