After pulling one out late against Costa Rica on Friday, Brazil’s Neymar decided to kneel down in the middle of field and weep.

He stayed that way, crying, for so long that his legs gave out. Then he spent another good while in a seated position, continuing to cover his face and sob.

None of his teammates offered any consolation. Presumably, that would’ve meant more tears in the locker room once Neymar realized someone had wandered into the frame and blocked his closeup.

This type of naked emotion is one of the charming things about soccer. But even a grief counsellor might’ve said, “It’s your second game. Ease up a little.”

Neymar is a wonderful offensive player whose only defensive inclination is denying neutral viewers the opportunity to like him. Everything he does seems calculated to attract attention, often the wrong sort.

But just at the moment, he is the most important player in Russia. He’s the human wedge separating this workaday Brazil team from becoming the Brazil of our dreams.

They’ve had a rough go of it lately – embarrassed in South Africa in 2010; stumbling into a national disaster in their own country four years later. For a while, it was cruelly enjoyable to watch Brazil tumble down the mountain. Like Neymar, they had become occasionally insufferable.

But as they struggle to get it together for the third time in a row, something has begun to occur to you – that a World Cup without Brazil at the height of its powers is a paltry thing. It’s a birthday party without the cake.

Like no other team in any other sport, the Brazilian men’s national football side is meant to represent something visceral. Just the sight of the yellow and blue should elicit joy.

That feeling transcends rooting interests and international grudges. Everyone everywhere wants to like Brazil.

You needn’t even care that much about the sport to get it because the equation has been hammered into our collective consciousness for 60 years: Brazil+Soccer=Fun.

Other national sides have their own math (Italy+Soccer=Goalless Draw; Argentina+Soccer=Rugby; England+Soccer=Lose), but Brazil’s formula is the most resilient. It’s true because people believe it is.

The person most responsible for that is Pele. There have been several Brazilian players at or near his level, but they belonged to their own country. Pele was the rare athlete created so that we could all enjoy him.

“The greatest player in history was [Spain’s Alfredo] di Stefano,” the magisterial Hungarian, Ferenc Puskas, once said. “I refuse to classify Pele as a player. He was above that.”

Pele scored twice in the final at his great coming out during the 1958 World Cup in Sweden. Brazil rumbled the hosts 5-2 in that game.

“After the fifth goal, even I wanted to cheer for him,” Sweden’s Sigge Parling said afterward, capturing the general feeling.

That World Cup was the first one broadcast internationally. Like the moon landing, it changed the way people defined “us.” People everywhere were now part of something bigger, a truly global game. Pele and Brazil were the finest expression of it.

Curiously, Pele is not nearly as admired at home as he is everywhere else. Something about familiarity and contempt. But since ’58, he has remained our ideal of how a sports legend should comport himself – preternaturally full of brightness, on and off the field.

I met him once. When I offered a hand, he went in for a hug. When we sat down across from each other, he scooched his chair over to get closer. Throughout the interview, he repeatedly reached over to squeeze my knee as he made a point. It was like meeting God and finding out he’s even nicer than he seems in frescoes.

Pele’s capacious persona continued to animate Brazil long after he’d retired. To be a proper Brazilian player, it was not enough to be good. Through your manner of play, you must express something elemental not just about the game, but about life.

Carlos Alberto, captain of the greatest World Cup side ever, once said the most important part of putting on Brazil’s jersey was accepting “a responsibility to inspire.”

From Pele to Garrincha to Zico to Socrates to Ronaldo to Ronaldinho, that responsibility was passed down through generations. Brazil’s teams didn’t always take trophies, but they always won friends.

By the 2006 World Cup, Brazil was provoking such a frenzy that the ticket distribution at their opening match turned into a small riot. Not for the fans, but for the media. Grown men were screaming and clawing to get their entry passes. You had to literally fight for a seat.

Then it all went pear-shaped. The Brazilians wilted in that tournament. More depressingly, they had begun to look like everyone else – brittle, cynical and afraid of losing.

That new abundance of caution began to infect the entire Brazil setup. An artists’ collective was turning into a bunch of house painters. The more they lost, the worse it got, until they imploded against Germany four years ago.

The team in Russia is what remains from that wreckage. If any one of them can reach back to accept the baton from his predecessors, it’s Neymar. He is still caught somewhere between pragmatism and inspiration.

We saw flashes of both on Friday. He scored a lovely goal to seal the 2-0 win. He also dived horrendously in an attempt (briefly realized) to earn a penalty.

His standout moment was a very little one. Near the end, he was pinned into the Costa Rican corner. When a man approached, Neymar gripped his ankles around the ball, swept it up and over his back shoulder and then ran around the defender to accept his own rainbow pass. It was a show-off-y thing to do and had no real point to it, but it took your breath away.

Many can do it in practice. Only Neymar would try it while a half-billion people watched. That was something worth crying over – pure skill displayed for its own sake. Something fun. Something Brazilian.

The world is always in a terrible state, but for whatever reason, it feels more so now.

Brazilians being good at soccer is one of the few things left we all agree on. We are unanimously for it, and have missed them since they’ve been gone these many years. You could really feel the length of that absence in the final moments against Costa Rica as the game was won. For an instant, Brazil was back. It was glorious. 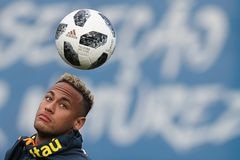 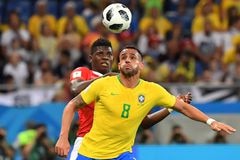