You can’t often say of a baseball player that he was elegant. Tony Fernandez was better than that. A hundred and sixty two times a year, he danced ballet at short.

Fernandez died on Saturday night at the age of 57. He’d been suffering from kidney disease and the effects of a stroke.

He is the first of that golden Toronto Blue Jays generation to go and perhaps the most inimitable. An impossibly spindly man who held the bat like it was a sledgehammer, Fernandez was the fulcrum around which the first great teams in Jays history turned. He remains the team’s career leader in games played and hits.

But it’s Fernandez afield that you could not forget.

He was born in San Pedro de Macoris in the Dominican Republic, a town of a couple of hundred thousand inhabitants. Macoris is known in the Dominican as the “city of infielders” and the “cradle of shortstops.” It has produced more than a hundred major-league ballplayers, most of them gifted fielders. None more so than Fernandez.

He grew up within sight of the town’s largest building – the baseball stadium. He would practise there as a kid with a tatty old glove and in his bare feet. The thing his contemporaries remembered most about him were his knock knees and his ability to get to any ball, hit anywhere. A writer once said of Fernandez that he had “the range of a Texas cattleman.”

In the late 1970s and early 1980s, the Blue Jays’ Latin America scout, Epy Guerrero, built an assembly line that started in the Dominican’s out-of-the-way places and ended in Canada.

Guerrero first spotted Fernandez as a 10-year-old. He’d pay him pennies to shag flies at local clinics and give him free gear.

Fernandez later recalled the older man setting his course in life: “One day, Epy told me, ‘Your father is blessed because when you grow up, I will sign you’. But until then I had never heard of Toronto.”

The Jays signed Fernandez at the age of 17 as an undrafted free agent. He made his major-league debut at 21.

Until Fernandez’s arrival, every team in Blue Jays history had been terrible. Not just bad, but shockingly so. Their stadium was a dump. It felt like every game was played in mid-winter. You’d have been better off watching from atop a downtown office building than in the left-field bleachers, that’s how far away they were from the action.

There was just about nothing to like about the Blue Jays at that point, other than the fact that the Yankees and Orioles showed up every once in a while to demonstrate how baseball ought to be played.

Fernandez was one of the people who changed that. His arrival coincided with a surge in quality.

There were a lot of guys to admire on those mid-eighties teams – silky smooth players such as Damaso Garcia and Lloyd Moseby; and bangers such as Jesse Barfield and George Bell. But Fernandez was everyone’s favourite.

For one, because he looked so odd. Ballplayers in general are hefty men. Given the day-in, day-out rigour of the sport, it tends to reward people who are built to absorb punishment.

Fernandez was instead tall and whippet thin. Not just skinny, but verging on two-dimensional. At the plate, knees swaying, arms akimbo and bat bobbing as though he might drop it, Fernandez looked like a plucked chicken playing Whac-A-Mole.

But once in motion, Fernandez was an athlete of uncommon grace. His signature move – scanning to his right to collect a grounder backhanded, leaping in the air, spinning around toward first as he did so, then underhanding the ball across the width of the diamond – looked easy. Until you imagined yourself attempting it, and then envisioned all the herniated discs that would result.

Fernandez was so good and so young that he forced the Jays to trade away another excellent shortstop (and San Pedro de Macoris product) Alfredo Griffin in order to make room for him.

In remembering Fernandez on Sunday, teammates recalled his quiet professionalism.

“A pitcher’s dream,” David Wells tweeted. “One of the best ever.”

“A kind, gentle giant of a man,” Dan Plesac said.

Fernandez wasn’t a charismatic presence off the field. He had a monkish aspect in public – deeply religious with a personality that tended toward the taciturn.

On Sunday, Buck Martinez, Fernandez’s Jays teammate and later his manager, went back to Fernandez’s last game in Toronto.

“He pinch hit in the final game of the season … in the eighth. And his spot had come up in the ninth. But he had gone home,” Martinez said, giggling. “But that was Tony. Everybody understood that’s the way Tony was.”

Like all the great ones, Fernandez was different. All he had to do in order to be loved was play.

Those late-eighties teams weren’t the best in Jays history, but they might have been the most fun. They were triumphs of imagination, as the Jays out-manoeuvred bigger, better-funded teams by finding undervalued talent. Toronto gave Fernandez and Co. a chance. In return, they put Toronto on the map.

He was at the centre of the 1991 trade that changed everything for the Jays – he and Fred McGriff to San Diego for Roberto Alomar and Joe Carter.

But other cities didn’t suit Fernandez. He routinely drifted back to Toronto over the remainder of his career. He was back in ’93 for the second World Series win. He left and returned again in ’98. He had that last brief stint in ’01.

He was the prodigal son of Blue Jays baseball. Toronto welcomed him back each time.

Despite the all-star appearances (five) and Gold Gloves (four), Fernandez wasn’t seriously considered for the Hall of Fame. Perhaps he’d been a little too quiet over the years.

His considerable star only shone brightly in the north.

In 2008, he was inducted into the Canadian Baseball Hall of Fame.

“It is an honour for me,” Fernandez said at the time. “Especially for a kid coming out of the Dominican Republic that never expected to make it this far in baseball.”

Because of Fernandez, a lot of other kids in the Dominican were given the luxury of that hope. 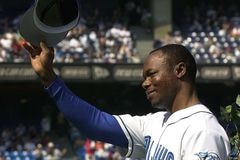