The Toronto Arrows raced into an early 17-0 lead and then held on for a nail-biting 27-22 win over the Houston SaberCats in Major League Rugby play Sunday.

Toronto was down two men in the final minutes. Flanker Tomy de la Vega left first, sin-binned in the 76th minute as the Arrows were penalized for repeated infringements. Then lock Mike Sheppard was red-carded in the 82nd minute for contact to the head.

The game ended in dramatic fashion with the Houston backs joining a driving maul that crossed the Toronto goal line only to have referee Jamie Nutbrown rule that the SaberCats had not been able to ground the ball.

The game was one of four MLR fixtures taking place at Las Vegas’s Sam Boyd Stadium on the weekend.

Guiseppe du Toit, Manuel Diana and captain Dan Moor scored tries for Toronto, which led 24-5 at the half. Sam Malcolm kicked three conversions and a penalty while Tayler Adams booted a penalty.

Toronto piled the pressure on early and went ahead on Malcolm’s third-minute penalty. Houston kept conceding penalties and du Toit sliced through the Houston defence for a 12th-minute try on a set play from a lineout after a SaberCats penalty.

Diana went over in the 15th, set up by a fine Adams off-load, for a converted try that increased the lead to 17-0.

Houston struck back in the 18th with a brilliant piece of individual play from Roos, who beat two Toronto players to get to a Windsor grubber kick and then accelerated toward the Arrows goal line.

Houston centre Tiaan Loots was sin-binned in the 28th minute for taking a Toronto player out without the ball. Moor then made Houston pay for a poor kick in the 35th minute, racing in for the try after Adams started the attack that led to a 24-5 lead.

The Arrows found themselves on the back foot early in the second half, warned after conceding a string of penalties as Houston reeled off 10 straight points.

Houston cut the Toronto lead to 24-12 in the 47th on a converted try by substitute hooker Fortuny as the SaberCat pack crashed over the line after a lineout resulting from a penalty against Toronto. A Windsor penalty kick made it 24-15 in the 56th.

Adams halted the Houston run of points with a penalty kick in the 67th minute.

Seconds after de la Vega was sin-binned, Roos darted over from a five-metre scrum with Windsor’s conversion making it 27-22.

Chris Silverthorn, the Arrows director of rugby, made just one change to his starting lineup with John Sheridan coming in on the wing for injured Uruguayan international Gaston Mieres.

Toronto’s starting 15 featured 13 full internationals – 11 Canadians, one Uruguayan and one Argentine – with a combined cap count of 188.

Canadian fly-half Will Kelly came off the bench in the second half, making his Arrows debut.

The Arrows won their season opener on the road last weekend, defeating Austin 38-10. Houston was coming off a 21-12 home victory over Colorado.

Toronto finished fifth with an 11-5-0 record in its inaugural MLR season in 2019 before falling to the eventual champion Seattle Seawolves in the playoff semi-final. Houston finished seventh at 6-10-0.

Because of the weather in Toronto, the Arrows play their first seven games on the road. The home opener, against the Utah Warriors, is April 4. 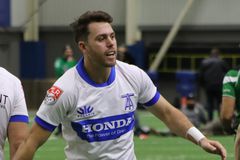 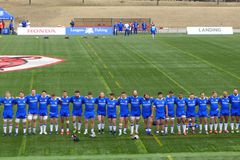