Short on star power but big in grit has been the sales pitch for the 2019 edition of the Toronto Blue Jays, a team in full-blown rebuild hoping to remain relevant as another season unfolds.

Hard to live up to that billing, however, when putting bat to ball is as cumbersome as the Blue Jays made it appear Thursday at Rogers Centre as the Detroit Tigers won 2-0 in 10 innings in the season opener for both teams.

The sublime performance of Jordan Zimmermann, the Tigers starter, is to be credited for mostly silencing the Toronto bats. He took a a perfect game into the seventh before Teoscar Hernandez legged out an infield single.

That would be the lone mark against Zimmermann’s line as he went seven innings, with no walks and four strikeouts before departing with a no-decision in a runless game.

In the 10th, however, with newly acquired Daniel Hudson on the mound in relief for Toronto, the Tigers took charge. Hudson, trying to make a good, first impression, surrendered a leadoff double to Niko Goodrum, then gave up a homer to Christin Steward deep to right field on a 0-2 pitch.

Toronto lacked any firepower to pull back in the bottom half of the 10th. And in a game in which the Blue Jays mustered just two hits it seemed somehow fitting that Kevin Pillar grounded out weakly to second to end what had been a mostly dreary affair for the home side.

The crowd was announced at just over 45,000 – about 1,100 under a sellout – and it marked the lowest turnout for a Blue Jays home opener since 2000. The Tigers are in town for another three games.

The outcome was not the result envisioned by Charlie Montoyo, a career minor-league coach who was making his major-league managerial debut with the Blue Jays. But he remained pumped up afterward nonetheless.

“It was pretty cool,” he said of the moment. “I’m enjoying every minute of it. And how about a nail-biter for my first one. It was fun.”

The game plodded along as both Zimmerman and Marcus Stroman, who got the starting nod for the Blue Jays, were in command. Both starters took no-hitters into the sixth inning.

In fact, Zimmermann was perfect heading into the seventh on a mind-bending 55 pitches before Hernandez knocked his infield hit.

Detroit’s Nicholas Castellanos finally broke the goose egg off Stroman with a single in the sixth, just one of two hits the Toronto pitcher allowed over seven innings. He struck out seven and gave up four walks.

When he met with reporters afterward, Stroman had a black cap pulled on his head. On the bill, in pink lettering, it read: “I came here to break hearts.”

“I feel good,” Stroman said of his game. “I got my body to where I need to be, my work ethic was extremely important in this off-season and I’m just hoping it all pays off.

“It was the first game. We’ve got a lot more to go here.”

The game marked the start of Toronto’s 43rd season in the American League and it came with all the ceremonial trappings.

After the player introductions and the ceremonial first pitch offered up by newly minted Hall of Fame pitcher and former Blue Jay Jack Morris, it was finally time to play ball.

Before the game, the Blue Jays concluded some opening-day business, adding 24-year-old designated hitter/first baseman Rowdy Tellez to the 25-man roster. He was the last man to make the grade.

The spot became available after Toronto traded Kendrys Morales, its one-dimensional designated hitter, Wednesday night in a deal with the Oakland Athletics.

Unlike Morales, Tellez is adept at playing first, but he was pencilled for the opener as the DH, where he could see regular action.

“He’s going to get a chance to show what he can do,” Montoyo said before the game, adding that he plans to rotate others, such as Randal Grichuk, through the DH role.

Like the team itself, the main entrance to the Blue Jays clubhouse has seen a makeover, complete with a sliding steel door that opens elevator-like into a spacious foyer. “Where do you want to go – men’s wear?” joked one of the clubhouse attendants as several stepped inside.

Once there, the first thing to greet visitors are the two Commissioner’s trophies the Blue Jays won for their back-to-back (and only) World Series triumphs in 1992 and 1993.

The trophies represent a stark reminder to the passing Blue Jays players of what they won’t be winning for a while. 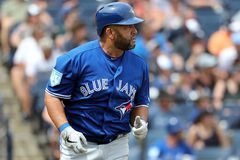 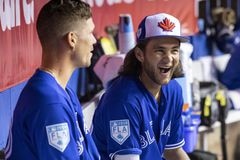 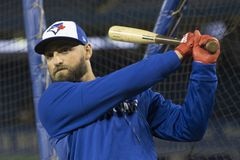