Roberto Osuna is used to being in high-pressure situations, having established himself as an elite closer for the Toronto Blue Jays before reaching the age of 24.

The native of the Mexican state of Sinaloa is about to begin a court proceeding that will test his resolve.

Toronto defence lawyer Dominic Basile will appear on Osuna’s behalf in a downtown Toronto courtroom on Monday to answer to a criminal charge of assault levied against the pitcher last month by Toronto police. Osuna won’t appear – it's not required – and the session is largely for administrative purposes, to allow Basile to collect the evidence the Crown has gathered against his client.

“On Monday, it’s likely to be remanded two to three weeks, and I’m going to have a meeting with the Crown attorney in the interim,” Basile said.

That court appearance will initiate a legal process that could take months to resolve should the matter go to a trial.

Even if the case is settled out of court, as anticipated, the outcome could have huge ramifications for Osuna’s baseball career, according to legal experts.

“I can’t speak to the Osuna case directly, but I can speak to these kinds of cases generally,” Peter Brauti, a noted Toronto defence lawyer, said in an interview. “There is a wide range of possible sanctions, everything from counselling and a withdrawl [of the charge] to a conditional discharge to a suspended sentence – or even jail if there are significant injuries.”

Osuna could also face restrictions in travelling between Canada and the United States if he receives a criminal conviction, an obvious problem if he wants to continue playing.

“The mere fact that he’s been arrested poses some problems, just logistically, to be able to get himself around,” Toronto immigration lawyer Brian Dingle said.

There is the potential loss of endorsement deals with sponsors.

And, of course, there’s the bigger, corporate picture. “I don’t ever think he’ll pitch for the Blue Jays again, unfortunately, no matter what happens,” Toronto criminal lawyer Alison Craig, a self-described Blue Jays fan, said. “With a corporation like Rogers, they have to think about all that stuff.”

Team owner Rogers Communications Inc. is responsible for the US$5.3-million salary Osuna will make this year. He will have earned more than US$8.3-million from the baseball organization by the end of the 2018 season.

The Blue Jays have voiced displeasure over the allegations against Osuna, stating at the time of his arrest that “the type of conduct associated with this incident is not reflective of our values as an organization.”

Osuna has already missed significant playing time, having been placed on administrative leave with pay by Major League Baseball immediately after he was charged. The sanction was levied under the league’s domestic violence, sexual assault and child abuse policy established in conjunction with the Major League Baseball Players Association in 2015.

MLB can act independently, regardless of the outcome of any criminal proceeding. It is anticipated that Osuna will face a considerable suspension, without pay, whenever commissioner Rob Manfred makes his ruling. The suspension can include time already spent on administrative leave; in that case, Osuna would have to pay back the salary he received during that time.

Osuna is the 10th player to be investigated by MLB under the policy. It’s the first time an alleged offence has taken place in Canada.

Of the nine investigations MLB has concluded under the policy, the harshest suspension has been the 100 games levied last week against San Diego Padres reliever Jose Torres. The penalty, which covers the rest of the season, stems from an incident on Dec. 29 in Phoenix, where Torres was charged with assault with a deadly weapon, criminal damage and intimidation at a home he shares with a woman.

Torres has pleaded not guilty to the charge and the case is still pending.

Osuna’s charge stems from an altercation he had with a woman at a downtown Toronto apartment building. He was charged in the early hours of May 8, following an off-day for the Blue Jays, having just returned from Florida with the team.

As part of the conditions of his release, court documents stipulate that Osuna is barred from possessing any weapons as defined by the Criminal Code and from purchasing, possessing or consuming alcohol.

He has also been barred from coming into contact with the alleged victim or coming within 100 metres of the downtown Toronto building that is listed as his home address.

Since the alleged incident, Osuna has been in Florida, where he continues to work on baseball activities at the Blue Jays’ minor league training complex in Dunedin, according to the club. He is paying for his own legal services.

His absence from the back end of the Blue Jays bullpen has created a noticeable void this season for a team that continues to play poorly.

Before he was placed on leave, he earned his fifth save of the year on April 10 against Baltimore. It was No. 100 of his four-year MLB career, becoming the youngest pitcher in league history to reach that milestone.

He surpassed the previous mark held by Francisco Rodriguez by more than one year – and Rodriguez is a strong candidate to make it to the Baseball Hall of Fame.

But first Osuna must deal with the serious matter at hand.

In his experience, Brauti, the Toronto defence lawyer, said this type of an assault charge involving celebrity or high-profile public figures rarely progresses to the trial stage.

“It often gets settled without a trial and that’s usually because the individual is of significant means and can afford good counsel,” he said. “Good counsel can tend to be creative in coming up with solutions that avoid a trial.

“For example, if there’s no significant injury [to the victim] and an accused like Mr. Osuna was prepared to do a lot of hours of community service, that may go a long way to resolving the matter without a trial.”

Craig said she is not so certain of a quick resolution of the matter.

“It seemed to be these things used to be resolved faster when a public figure was involved,” she said. “It seems to me more things have been finding their way to court more recently.”

The publicity surrounding the case could diminish potential sponsorship revenue.

So far, his portfolio has been somewhat modest. Last year, he had deals with both Gatorade and a Jaguar dealership – promotions that both came to an end at the beginning of 2018, before he was charged.

Currently, he has an ongoing business relationship with Pfaff Automotive. There was a picture on his Instagram account, which is not private, that shows him leaning against a Porsche sports car at a dealership in York Region.

In a story posted on the Newstalk 1010 radio website in early May, Pfaff marketing director Melanie Somerville said the deal was still active – even though the company was not happy to learn of the allegations against Osuna.

Vijay Setlur, a marketing instructor at the Schulich School of Business at Toronto’s York University, said that even if Osuna beats the criminal charge, it will be difficult – but not impossible – for him to repair the damage to his reputation.

“We have this sort of phenomena now, the public court of opinion,” Setlur said. “And sometimes just saying someone’s alleged to have done this, whether they are found guilty or not, you can’t really win in the end.”

The key will be Osuna’s behaviour and performance if and when he returns to the game.

“If he continues to do well on the field and combines that with community work, strong messaging and a devotion to his craft he … should be able to rehabilitate his brand.

“But it’s going to take a lot of work off the field as well.” 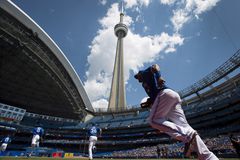 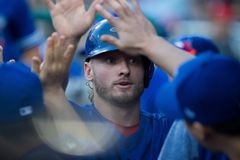 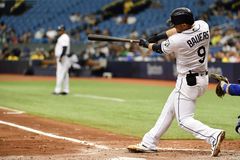