What happens when you get your first Christmas game in 18 years?

You go a little bonkers.

The Toronto Raptors didn’t just nod at their suddenly improved place in the schedule. They lit it up in neon and posted signs. Kyle Lowry called it “a badge of honour.”

So there were Christmas lights, carols, carollers, stockings dropped from the rafters and holiday montages. Every broadcaster in attendance felt the need to wear red crushed velvet.

VanVleet delivered this celebratory message in a tone of voice that reminded you of a hostage video, which was in keeping with the mood. Let’s call the electricity in the building “low wattage” to start out.

In an attempt to counterbalance all attempts at frivolity, the Boston Celtics came out in green tartan warm-ups looking like a bunch of superfit bagpipers.

I’m Irish. Being Irish is great. But nobody should be that Irish.

One thing the Raptors couldn’t get right – jersey colour. The Celtics wore green, so the Raptors – a team whose signature colour is red – wore black. Who made that call? Santa’s copyright lawyer?

Another thing Toronto was having trouble with? Basketball. The Raptors were having some difficulty with the playing of basketball.

No amount of manufactured cheer and Christmas wishing could overcome a noon start. Has there ever been a good basketball game that started at noon? In all of history?

Basketball players are not programmed to play this early in the day. They are especially not programmed to do so after getting into the egg nog, and a bunch of them seemed as though they’d been hitting that punch bowl hard.

The Raptors scored the first 10 points of the game. The rout was on! After a curative timeout – and possibly some electrolytes – the Celtics came back and began beating the heck out of Toronto.

It continued on like that until the end – Boston scoring easy buckets while the Raptors did their darnedest to kick field goals. There was more travelling in this game than your average issue of National Geographic. The Raptors had as many turnovers as assists.

“It was an out-of-rhythm game for us,” Raptors coach Nick Nurse said, then zeroed in on going flat in the fourth quarter. “We lost our spirit quickly. I’m not sure why.”

I’m pretty sure why. They’ve played four games in five days and are leaning so hard on just a few guys, they are at risk of snapping them in half.

The Raptors have never won a Christmas game. If this is what badges of honour look like, Toronto might want to accept fewer of them.

The fun continues on Saturday in Boston. There’s a trip to Oklahoma and a New Year’s Eve game against Cleveland at home. Then we’re into the NBA’s dog days.

One overarching question that will be asked in the weeks leading into February’s trade deadline – are the Raptors an elite franchise in the East?

That’s hard to say. The Raptors and Celtics have similar records and similar aspirations. Neither is in Milwaukee’s class. At least, not at the moment.

But the two teams didn’t look very even on the day. In fairness, this isn’t really the Raptors. It’s a bunch of guys in Raptors’ uniforms.

Half of the front line is out with injury – Marc Gasol, Pascal Siakam and the resurgent Norman Powell. All three will be absent an indeterminate amount of time, which usually means “forever and a day.”

Under the circumstances, who’s to say what the Raptors are? There was a world in which they strip the whole thing down in the new year – trade Kyle Lowry and Gasol – and prepare to rebuild around the young core.

But that won’t work now. With everyone out, Lowry is the guy holding the team together. He had an off game against Boston on Wednesday and the whole squad went sideways. Trading him before the next off-season is waving a white flag on what is still a pretty healthy-looking year.

Plus, nobody’s going to want Gasol if he’s hurt. And he may be seriously hurt.

But with so many men down, everyone who is still on the job is being run ragged. Lowry is the NBA leader in minutes-per-game. VanVleet is seventh. When he went down, Siakam was fourth.

That’s a lot of miles to put on your main guys just in order to tread water. At some point, they have to be eased back for the good of everyone.

Easing back means losing games, games the Raptors can no longer afford to lose. A month ago, it was assumed they’d cruise on auto-pilot into a 50-win season. That’s no longer the case. They will have to scrap their way to a decent postseason position.

This is where you start to juggle your priorities. Is the focus this year? Or next? Or the one afterward? All of a sudden, people have to start making those decisions. This leaves the Raptors in more flux than they had become used to. This team is balanced between two things, and doesn’t know which it wants to be.

There is one bit of good news – it’s very unlikely the Raptors will be playing on Christmas Day next year. Or the year after. Or maybe ever again.

Which is good. There’s only one sort of holiday spirit that counts in the NBA – the one you feel as spring begins turning to summer. 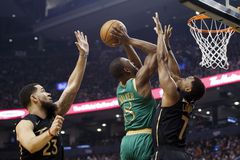 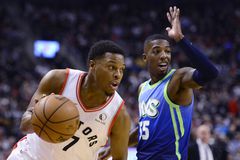 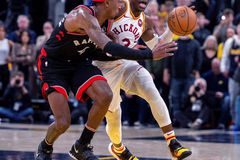