The Toronto Raptors should have lost this series against Boston.

They weren’t beaten in the first game. They were embarrassed.

Losing the second game put them in an awful position – only a handful of teams have ever come back from 2-0 down.

And they were on the way to being beaten in Game 3 until some late heroics.

That’s the Canadian perspective. The other way of thinking about it is that the Boston Celtics should have won this series already.

They have had the better star (Jayson Tatum), the smoother defence, all the momentum, the hot shooting hand and – yes, I know this hurts - the better coach. So pooching this would be one to remember.

That’s what will be in Boston’s heads heading into Friday’s deciding Game 7 – that Toronto has done most things wrong, and can still win.

Meanwhile, Boston did most things right on Wednesday and still found a way to lose. If mental advantages exist in sport, that means mental disadvantages must as well. We’re about to see which is more important.

In artistic terms, Wednesday’s 125-122 Raptors' victory was not a sonata. It was more the sound of a man banging two rocks together, though they did find an AC/DC beat near the end.

Neither team had much of a shooting touch. Each was playing blanket defence. The most ambitious aspect of the game was the fouling.

Toronto led it late, but did not score in nearly 4 1/2 minutes to end the game. That scoring trough stretched into the extra period. Norm Powell had an open three to win it, but rimmed it out. In the second OT, Boston took the upper hand, then handed it back in the late going.

By Friday, these teams will be properly sick of each other. The bubble was supposed to be a bonding experience, but apparently that camaraderie does not cross franchise boundaries.

Early on, Kyle Lowry undercut Jaylen Brown at the basket. Lowry stood over Brown for several long seconds with his hand extended. Brown stared up at him unhappily, refusing the help. He waited until a couple of teammates came over before he grabbed hands.

Lowry has the way about him, which is why he makes so much money.

On Wednesday, he was at his whiny, abrasive best. Chasing referees around to yell at them. Forcing teammates to come over and drag him away. When he had his chin split by an inadvertent elbow, Lowry did the same complaining routine with a bloody towel.

On the other end of that competitiveness spectrum is Marc Gasol. This man was once a force in the NBA. That appears to be over now.

Gasol was steadily taken advantage of by smaller Celtics' players. After another miserable attempt at scoring was rebuffed, Gasol attempted to rip his jersey, and couldn’t manage that either. After being substituted, he bypassed the bench and spent a few reflective moments hiding behind one of the soundstage walls.

Which makes all the more remarkable that Toronto won.

This was one of those nights where Lowry shames his colleagues into trying a little harder. Nearly alone, he muscled Toronto through a ragged first half. In the second, things began to fall everyone else’s way.

Gasol did something more unusual than make a bucket. He made two of them. Fred VanVleet went a little vanrun, scoring nine in a row.

For a nice change, the Celtics played the role of the Raptors. Their star, Tatum, had a rough shooting night. Everyone else sat around staring at him.

By the end, no one could make a shot. Everyone looked exhausted. They get 40-odd hours rest and then get back it. One of these teams is going to leave the bubble feeling like they missed a primo opportunity during a very weird year.

The one who does go will have to ask itself hard questions about what comes next.

Which brings us to Giannis Antetokounmpo.

The Milwaukee star was asked after his team’s elimination on Tuesday if he plans to request a trade. That would put him in line for a full max payout, while also leaving the Bucks with something.

Antetokounmpo is Toronto’s white whale – a bonafide superstar nearing free agency who has long-standing connections to Raptors' boss Masai Ujiri. The not-so-secret hope is that he could be lured north immediately.

There are about a hundred ways to answer the ‘Are you leaving?’ question that are neither ‘yes’ nor a ‘no’. Something like, ‘It’s too soon to talk about that’ is the hedge play.

Of course, he could play out the year and leave then. Or he could change his mind. But that’s never a good way to leave, and Antetokounmpo strikes you as the sort who wants to do things the friendly way.

And maybe – probably not, but maybe – the Raptors don’t need that saviour. A team that was on the brink of humiliation now has a clear path to redemption.

Giannis has gone home. They are a good match-up for the Miami Heat in the conference championships. If the bubble was getting them down, at least they can see the other side of it now. Kids do four weeks at away camp. Why can’t a bunch of grown-up rich guys? At least, that’s the way they want to start looking at it.

Or maybe this has been the plan all along. Last year’s run was too simple, too condensed.

Maybe the Raptors weren’t laying down against Boston in those blowouts. Maybe they were just building drama. 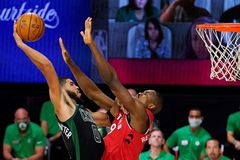 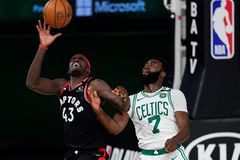