With his Philadelphia 76ers facing possible elimination by the Toronto Raptors on Thursday night, Sixers coach Brett Brown had only to look back at last year’s NBA playoffs to find teams that have overcome 3-2 series deficits.

Led by the MVP-calibre play of Kawhi Leonard, the Raptors can oust the Sixers in Philly and advance to the Eastern Conference finals without the hassle and stress of a Game 7 back in Toronto. It would be a third successive win for the Raptors in this series and a genuine assertion of dominance.

Yet, in a series that’s been as topsy-turvy as this one, it’s not unrealistic to believe the 76ers may orchestrate another plot twist.

“We have shown we have the ability to play good basketball, the ability to beat the Toronto Raptors. We have shown to be good – at times very good – in Philadelphia in front of an amazing home crowd,” Brown said on a Wednesday conference call with media. “If you look at last year, there were two examples of teams coming back from 3-2 deficits.”

Brown’s memory is correct. Two teams did overcome those intimidating odds in last year’s playoffs. The Cleveland Cavaliers fell into a 3-2 hole against the Boston Celtics in the Eastern Conference finals and came back to win the series. The Golden State Warriors were in the same situation against the Houston Rockets in the Western Conference finals and rallied to prevail.

“Nobody is hanging their head,” Brown said.

This series has been wildly unpredictable – aside from Leonard being remarkable in every game. The Sixers have held Toronto to as few as 89 points and allowed as many as 125. Toronto’s defence has at times been feverishly smothering, and at other times lacklustre. The Sixers ruled the rebounding category early in the series, and the Raptors flipped that Tuesday night.

Pascal Siakam has, at times, been great, other times hampered by injury. Kyle Lowry has been cold, then hot.

Joel Embiid was extraordinarily dominant while thumping Toronto in Game 3, rollicking for 33 points, 10 boards and swatting five blocks before Sixers fans, who applauded all of his flamboyant celebrations. But that version of Embiid has since been replaced with a much lower-energy version, one that turned the ball over a ludicrous eight times in Game 5 and appeared defeated by an illness he’s suffering. Toronto fans taunted the struggling Embiid with his own celebratory moves.

So the question was posed to Brown: do you toss the film from the Sixers’ embarrassing 125-89 on Tuesday in Toronto and focus instead on how you got the two wins, especially the Game 3 win that crushed Toronto’s soul?

“I completely delve into the [Game 5 tape],” Brown said. “Will it be a witch hunt? No it won’t. We will hold our guys together and obviously hold people accountable. There are things everybody can do, me, the players. But to dismiss what happened [Tuesday] night? I am not doing that.”

The Raptors are targeting a franchise-best season – there is no other way to see it when a team swings for the fences and trades for one guaranteed year of a superstar such as Leonard. This could be the Raptors’ second trip to the conference finals in franchise history. They’ve never made the NBA finals.

The 76ers haven’t been to the conference finals since 2001, advancing after Allen Iverson led his team to a victory in seven games over Vince Carter’s Raptors. Embiid is supposed to be the franchise player to guide the current 76ers to big things. Philly has a lot of the line on Thursday.

“I love playing at home. I expect the atmosphere to be great. I expect them to carry us. … It pushes us through,” Embiid said. “It’s win or go home, so we’ve got to get that one.”

He told Drake as he exited Toronto’s floor Tuesday night the Sixers would be back for a Game 7.

“I’ve got to smile on the court, I’ve got to lift my teammates up,” Embiid said. “That’s how I dominate. If you see me smile, that’s means I’m doing what I’m supposed to be doing. And I intend to be doing that.”

Joel Embiid emerges as central figure in Raptors-Sixers series – not just for his play
May 8, 2019 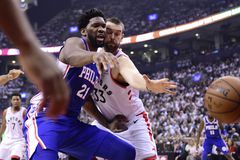 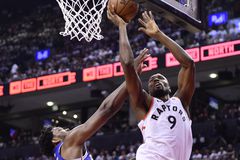 Opinion
Sixers’ mood goes from tense to ‘in ruins’ after Game 5 loss to Raptors
May 8, 2019 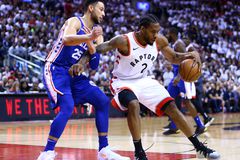