Nick Nurse might be a rookie NBA head coach but he’s an old hand in the role.

As the 51-year-old gets set to lead the most fascinating Toronto Raptors squad in franchise history, he is facing new pressure not just as a head coach on the game’s biggest stage but as one for a team that has expectations of a deep playoff run in his first season.

He has in his hands a team fresh off a franchise-record 59-win regular season that morphed into a disappointing second-round playoff exit. He takes over from the fired Dwane Casey, the team’s winningest coach. He’s been dealt a bolstered hand after the club traded DeMar DeRozan for enigmatic superstar Kawhi Leonard. And all eyes will be on if star guard Kyle Lowry, who lost his best friend as a teammate, can mesh quickly with a top-three NBA talent in Leonard.

The audacious moves suggest the team is taking a big swing this season at its first-ever trip to the NBA finals. With Leonard’s time in Toronto guaranteed at just a single season, the clock is ticking for the team.

This is undoubtedly the biggest coaching gig of a career he began at the age of 23 that’s taken him from a small college in Iowa to Britain to the NBA’s Development League and, finally, to the NBA.

It all started in Carroll, Iowa, a town of some 10,000 people, where Nurse grew up as the youngest in a family of three girls and six boys. His mom taught school and his dad delivered the mail, founded the local Little League, organized basketball events for the kids and road-tripped the family five hours to Chicago in summers to watch their beloved Cubs.

Nurse followed everything his older brothers did. He quarterbacked the high-school football team like they had, was a pitcher on the diamond, a point guard on the hardwood and a pole vaulter on the track team – thanks to the pole vault pit in the family yard.

The Des Moines Register named Nurse its 1985 high-school male athlete of the year, and – like his brothers – he went on to play basketball at the University of Northern Iowa. As a sharp-shooting point guard there, he appeared in 111 games and drilled 170 of his 368 three-point attempts, good for a school record 46.8 per cent.

He graduated with an accounting degree and knew he didn’t have the talent to be a high-end pro player. So he did a season as a grad assistant at UNI, then one as a player-coach for the Derby Storm of the British Basketball League (BBL). By 23, he took the head coaching job at Grand View University, a small college in Des Moines.

“Most people would say, ‘Okay let me sit back and learn from other coaches,’ ” Nurse said in an interview at his office this week. “But I grabbed a team and just started coaching. I was a head coach for most of the first 20 years of my coaching life.”

In 1995, Nurse left for what would be 11 years coaching in Europe, mostly for various teams in the BBL, where he won two championships and he was twice named coach of the year. He spent his days reading coaching books and devouring game film, then experimenting with his squads.

“I was always in laboratory mode. I could take things to the court and try them, because there weren’t that many eyeballs on me there,” Nurse said.

Raptors president Masai Ujiri was one of the BBL players his teams faced back then.

“He was one of the youngest coaches, but a very respected coach at the time,” Ujiri said. “He thinks the game differently.”

The BBL’s top rivalry developed between Nurse and fellow American Chris Finch (today the associate head coach of the New Orleans Pelicans, and a friend whom Nurse would later help coach Britain’s men’s team at the 2012 London Olympics). Games between Nurse’s Manchester Giants and Finch’s Sheffield Sharks filled the modest-sized arenas, were broadcast on Sky Sports and were popular among the league’s small pockets of passionate fans.

Nurse liked life in England. He got swept up in the frenzy of Manchester United’s historic 1998-99 season and became a soccer fan. He started going to the theatre, discovered a liking for jazz clubs and live music, and during breaks from the team, he could escape on a quick flight to one of Europe’s beaches.

But eventually Nurse wanted to get back to the States. He called about every assistant job that opened in the NBA’s Development League (now the G-League), but got no bites.

“I couldn’t get in. I didn’t fit their profile,” Nurse said. “They were looking for former players for those jobs.”

Then he decided to change his own fate while he on a visit home to Iowa. He was driving through Des Moines when he noticed a big new arena he’d never seen before and pulled off the highway to learn about it. He was told the arena only housed a minor-league hockey team.

He floated the idea of an expansion team in Des Moines to the NBA’s D-League office and to Jerry Crawford, a prominent local lawyer and a man with a track record of bringing parties together to make deals happen in Des Moines.

The idea eventually materialized, and Nurse became the first head coach of the D-League’s expansion Iowa Energy, from 2007 to 2011. In a league in which rosters are revolving constantly as players pop up and down from NBA rosters, he had to keep things simple and could only reach so far into his playbook. Still, he won a title in Iowa and developed players who earned league honours and NBA call-ups.

“Coach Nurse could help every guy flourish but still make it so we actually played together unselfishly,” Courtney Sims said in a phone interview. He was once a centre for the Energy and a D-League MVP who earned multiple NBA call-ups. “He could make you play with a real chip on your shoulder. Anybody who really knows basketball learns pretty fast that he’s a very good coach.”

Nurse then began two seasons as coach of the Rio Grande Valley Vipers, the Houston Rockets’ D-League affiliate, a franchise then navigating basketball analytics. His Vipers led the league in attempted three-pointers both years, and won a championship in 2013.

“When I got traded to the Vipers midway through that championship season, I was upset about the trade at first, and he made me feel welcome and comfortable pretty quick,” former forward D.J. Kennedy said in a phone interview. “After my first game, I was already thinking, ‘Hey this is the best thing that could have happened for me.’ Guys love playing for him. He has success everywhere he goes.”

The D-League success earned Nurse his first NBA job in 2013 – as an assistant with the Raptors, for whom Dwane Casey had become head coach in 2011.

Over his five years on Casey’s staff, his reputation for offensive imagination grew. His job also included one-on-one work with many players – such as seven-footer Jonas Valanciunas – outside team practices, where they honed things such as footwork and eventually added a three-point shot to the big man’s arsenal.

“He’s increased my versatility," Valanciunas said. "We’ve spent many, many hours in his office watching video, talking about expanding my game, how every small step I make could make a big difference to the team.”

Nurse got much of the credit for the team’s transformation in 2017 from an isolation-heavy offence to one that focused on ball movement and three-point shooting. The Raptors also had the NBA’s third-best offensive rating.

So what makes Nurse proudest from those five years on Casey’s staff?

“First, all the winning during that time and making the playoffs every year since I got here – and give Dwane a lot of credit – it’s a hard thing to do to take an NBA team from obscurity to relevance,” Nurse said. “The second thing is those all-star appearances for DeMar [DeRozan] and Kyle [Lowry]. Neither one of them were all-stars before, neither had emerged as a great player.”

Now as the head coach of the Raptors, Nurse faces the media daily and persistent questions about his offensive style and starting lineup. His answers: The starters will be fluid and based on matchups, outside of Lowry and Leonard. And he’s used words such as entrepreneurial and improvisational to describe the style.

“I love his energy," newly acquired guard Danny Green said. “He’s open to learning, getting stuff from different people and trying to get our insight, our opinions and open to taking what we have to say.”

While most teams put Summer League head-coaching duties on an assistant, Nurse chose to take that on himself in Las Vegas, eager to get back to being the lead in-game decision maker rather than one offering suggestions to the head coach.

“I felt a little rust there, but that was about it,” Nurse said. “I have, like, 1,000 games under the belt, but there are probably another 1,000 that didn’t count. I coached every tryout, free agent camp and summer league team I could get my hands on over the years.”

The team added a couple of new little things, such as awarding novelty WWF belts for top performers of the day or gathering in a large circle instead of bunching into a huddle.

“I’ve always done that circle. I felt like there was something to everyone being able to see everyone at all times. I didn’t like the big pack where some guys are way in the back,” Nurse said.

“It’s a time to share some things. I’m just doing me.”

‘It’s not the same offence that I’m used to’: Kawhi Leonard on the challenges of starting anew in Toronto
October 16, 2018 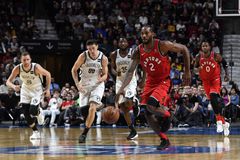 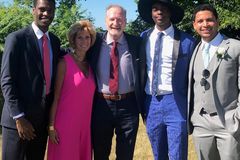 The rest of the NBA are still underdogs to the Warriors Subscriber content
October 15, 2018 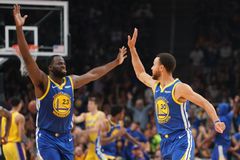