Nick Nurse made one thing crystal clear in his first public appearance as the Toronto Raptors’ new head coach: He has been given the green light to innovate and experiment with this team.

Appearing alongside team president Masai Ujiri, the 50-year-old Iowa native had his first news conference as an NBA head coach Thursday, after a 27-year coaching career that has spanned U.S colleges, Europe, the NBA’s Development League and five years one seat over on the Raptors bench.

Until now, all many Toronto fans knew of Nurse was that he was the assistant coach with the glasses sitting next to Dwane Casey, the guy who occasionally took on some of those between-quarters courtside TV interviews.

But Nurse was in charge of co-ordinating the team’s offence, and it ranked among the NBA’s top 10 in three of the past five seasons. He receives much of the credit for the overhaul last season of the team’s iso-ball brand of offence to one focused on ball movement and three-point shooting.

“I think we wanna be creative. I think you’re gonna see some different things. There’s probably gonna be some uncomfortableness at times when we try things that are maybe a little too far outside the box, but the season’s a process,” Nurse said on Thursday. “Try to put our guys in different positions, try some different combinations, et cetera, to prepare us for the playoffs, which is what matters.”

Many will wonder if merely promoting someone internally is enough change. Ujiri stressed that Nurse’s fresh, imaginative thinking – along with his preparedness – was what was most impressive about him as the front office vetted him and other candidates since firing Casey.

“Trying new stuff and being innovative is just who Nick is. You could tell he’s a tactician,” Ujiri said. “He thinks the game differently. In the NBA, we’re a copycat league. We copy everything that everybody else is doing. I’d love not to be that and go different ways.”

Nurse follows the most successful head coach in Raptors history, fired after a year that saw 59 regular-season victories and the club’s first No. 1 playoff seed. But the lasting memory is of being swept out of the playoffs in the second round by LeBron James and the Cavaliers. It was the third ousting by Cleveland in as many years, with the Raptors appearing to face an insurmountable opponent every time.

Nurse hails from Carroll, Iowa, where he played high-school basketball in the 1980s. He played college ball at Northern Iowa and later served as an assistant coach there, then at South Dakota.

He coached in Europe for 12 seasons, mostly in the British Basketball League (BBL), where he was a two-time champion and twice named BBL Coach of the Year. Interestingly, Ujiri noted that he was a player in that league while Nurse was a young coach there.

Then, in the NBA Development League (now G League), Nurse became the only head coach in league history to win championships with two different teams, the Iowa Energy (2011) and the Rio Grande Valley Vipers (2013). He was the 2011 winner of the Dennis Johnson Coach of the Year Award, as voted by his fellow coaches.

Who fills out Nurse’s coaching staff remains to be seen. Rex Kalamian, who dealt with defensive responsibilities under Casey, has left for the Los Angeles Clippers. Ujiri said that while Nurse has the authority to hire the assistant coaches he wants, he’s a very collaborative manager and will probably want to discuss the candidates.

“I think it’s really important that we get an experienced staff. Guys that have been a head coach, to me, at some level is important to me,” Nurse said. “I value head coaching just because it’s good to know what it’s like to be the decision maker. And to have those guys that are assistants that have done that, I just think it channels more, the ideas that they give you, they’re more constructive, they’re more objective, they understand your position a little bit better.”

He revealed a few other things about himself: He’s big on analytics, loves the way Kyle Lowry plays and says he’s going to let him run the offence more, believes Norman Powell is totally salvageable, has some things up his sleeve for Jonas Valanciunas and has some defensive ideas that “aren’t yet ready to talk about.” Also, he’s a huge Rolling Stones fan, having travelled all the way to England recently to see them play live at Old Trafford. 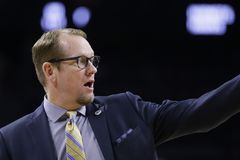 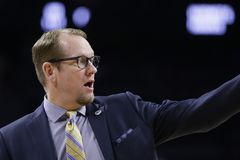 Opinion
New Raptors coach Nick Nurse is an unproven commodity, but he’s better than nothing at all
June 12, 2018 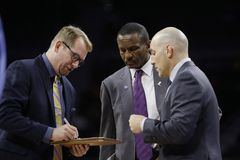