For Toronto Wolfpack coach Brian McDermott, a fullback is usually the fittest player on the field because of the metres he has to cover as the last line of defence. He has to be able to catch a high ball “under intense pressure” and read opposition attacks so he can marshal his defenders.

The fact that he’s relatively small "in a world of giants just adds to it,” said the 6-foot-5 McDermott, a former England international prop.

Listed at six feet and 178 pounds, the slender O’Brien is dwarfed by most everyone else on the field. And the elegant runner regularly takes his lumps in a sport where gang-tackling is the norm.

And that’s where the compliments end for McDermott.

“He is durable, and at some stage that durability is going to fall off,” the Toronto coach cautioned. “That’s just the nature of contact sport.

“A little bit too brave for his own good, I would say. That was one of my early assessments of him after being his coach. He probably needs to have a little bit more guile about him and a little more subtlety.

“Coming out of his own end, he runs like a big man in yardage and doesn’t mind taking a hit. But it’s not good for us. We need a bit more than that, a bit more tactics about us.”

Saturday will be O’Brien’s 43rd outing for the Wolfpack. He has also played 65 games for the Salford Red Devils, 62 for Warrington Wolves, 15 for Swinton Lions, seven for St Helens, four for Widnes Vikings and two each for North Wales Crusaders and Castleford Tigers.

O’Brien famously saved Salford from relegation in 2016 with a drop-goal in extra time for a 19-18 win over Hull Kingston Rovers in the Million Pound Game. The Red Devils had trailed 18-10 with two minutes to play.

He was at the other end of the Million Pound Game last October when the London Broncos won promotion at Toronto’s expense in a 4-2 win.

A former halfback, the 27-year-old O’Brien had his share of injuries earlier in his career, but says he has learned how to look after his body over the years.

“Being a smaller bloke running into some bigger blokes, I’ve probably been quite lucky as well,” he said.

He had a knee reconstruction at the age of 19 and suffered a dislocated shoulder soon after.

“Ever since then, I just had a little problem with concussions but other than that I’ve been fine,” he added.

Going into weekend play, Toronto sits atop the second-tier Betfred Championship standings with a 10-point edge over Toulouse, Leigh and York City with eight games remaining.

The top five teams will battle it out for one promotion spot in the Super League. The Wolfpack looks to finish first in the standings, which could reduce its playoff schedule to just two games.

Halifax (8-11-0) has lost five straight and stands eighth in the standings. Toronto is 4-0 all-time against Halifax, holding a 124-28 edge in scoring.

While Halifax may have stumbled in league play, it has mounted a memorable Challenge Cup run. The part-time side is the first lower-league club in more than a decade to reach the Cup semi-finals.

It is due to meet Super League leader St Helens on July 27.

Playing for Toronto has helped O’Brien reconnect with family over here. His fiancée regularly comes over.

“It’s been brilliant,” he said of the move to Canada.

A native of Warrington, England, who now makes his home in St Helens, O’Brien tested his pain threshold off the field with tattoos covering both arms. He says there is no more ink in his future.

“I think I’ve got a little bit left to finish on my arm but after that I’m done,” he said with finality. “Because I don’t like the pain. I can’t be bothered sitting though it any more.”

Toronto will be missing the injured Adam Sidlow, Adam Higson and Gary Wheeler on Saturday. 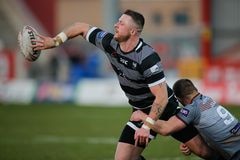 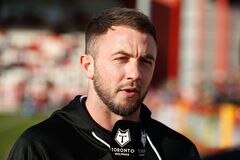 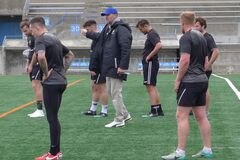