Majority owner David Argyle has stepped down as chairman and chief executive officer of the Toronto Wolfpack rugby league team in the midst of a racism scandal.

“I leave with a heavy heart as I have disgraced rugby and my family which I love,” Argyle wrote in an open letter to Wolfpack fans.

The Toronto-based Australian mining and resources entrepreneur made the move hours after issuing an apology to Jose Kenga. The Swinton Lions prop says, after approaching a teammate speaking to Argyle in the wake of the Lions’ 52-10 loss in Toronto on April 28, Argyle looked at him and said “Do they allow black people in Swinton?” and then laughed.

Kenga said he told Argyle “you can’t say that in this day and age and he just laughed, brushed it off and handed over a drink token to me.”

In an initial statement, Argyle said: “I take full responsibility and I want to unreservedly apologize to Jose, Swinton Lions, Toronto Wolfpack and our great fans for my comments.”

He went further in a subsequent open letter.

“If any other member of our Wolfpack family had made that comment I made, on balance, regardless context and environment, I would have fired them. Therefore, that also applies to me, so I am firing myself as chairman and CEO,” Argyle wrote. “We have begun a process to find the correct person[s] to achieve the founding objectives of the club in the role of chairman and CEO.

“Interim duties will be picked up by our long-standing executive team on both sides of the Atlantic.”

As for Argyle’s ownership role, it appears he is not walking away immediately from the transatlantic rugby league team.

“My financial obligations and commitments to the club, players, employees, sponsors, suppliers and broadcast partners will be met so that our objective to deliver the best club rugby in the world in Toronto, U.K. and France remain,” he wrote. “I have not had the opportunity to speak with all stakeholders, I will over the next couple of days.”

Asked to clarify Argyle’s ownership position, a club spokesman said there would be no further comment Friday.

In the letter, the 57-year-old Argyle said he was “incredibly careless with my words” in speaking to Kenga.

“I understand the unwitting racist connotations of what I said and the distress caused to Jose. Jose was gracious to take a video call with me today, I apologized and we discussed the matter in depth. I also fully support Jose’s decision to go on social media. I called Swinton RFLC, which I respect and admire as a club.

“The Wolfpack and our new chairman and CEO will remain firmly behind the core values and beliefs that make up the foundation of this organization — the world is a better place with more rugby balls in kids’ hands, we aspire to create a global centre for rugby excellence in Toronto, we actively promote opportunities for transatlantic trade and we support local family run businesses in Ontario. I am very proud of what the entire Wolfpack organization has achieved in the last 2 1/2 years.”

Kenga made the allegation via social media on Thursday. Toronto visits Swinton on Sunday.

The Rugby Football League, the governing body of English rugby league, has opened an investigation into the matter.

“We have a zero-tolerance approach to racist behaviour of any type,” it said.

In his statement on Twitter, Kenga said while he had remained silent on the incident, he now feels it is time to speak up.

“This is not a matter that should be swept under the carpet,” he said. “People who are racist ought to be held accountable for their actions. I have never felt so little in my life and can’t believe that people can still have such a racist mind. To make the comment is one thing but to laugh after is another which made me feel so powerless.

“There’s no room for intolerance, ignorance or racism.”

In a subsequent posting, Kenga said Argyle had apologized to him via FaceTime.

“I’d like to say I have forgiven him but still believe this needs to be severely addressed.”

He also said he had raised the matter immediately after the incident and “had followed protocol.”

“The issue had been raised with the RFL and it should not have taken this long and I feel that only that now I have spoken out about it, an investigation has been opened. What about my welfare as a player? I stand firmly by what I said. This is totally unacceptable.”

Argyle remained in the background when the Wolfpack first took the field in 2017. After the team won the third-tier League One in its debut season, he declined to speak to the media.

But in subsequent years, he has become the face of the Wolfpack — an enthusiastic backer of bringing the sport to North America.

The Wolfpack currently lead the second-tier Betfred Championship with a 14-1-0 record. Swinton stands 11th at 4-11-0. 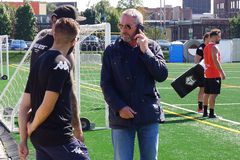