The Toronto Wolfpack made Brian McDermott’s debut as coach a winning one Sunday in an 14-0 victory over York City Knights in Betfred Championship rugby league play.

But newly promoted York made it a tough afternoon for the transatlantic Wolfpack, with some stiff defence until the visitors added 10 late points. The Knights gave the star-studded Toronto team all it could handle as it kicked off its third season.

“I’m not going to tell you that we were off. I thought we were OK, nearly good,” said McDermott. “I just think York was outstanding and that’s why it was a real contest.”

McDermott liked his team’s work ethic and defence. “We can build upon that, for sure,” he added.

Gary Wheeler scored the Wolfpack’s first try midway through the first half. York held firm until the 69th minute when fellow winger Matty Russell capped off a sweeping Toronto attack in the corner.

Russell almost had another try in the 74th minute when he touched the ball down surrounded by defenders as Toronto finishing strongly. But his foot was ruled in touch.

The Wolfpack fell at the final promotion hurdle in 2018, losing 4-2 to London Broncos in a promotion showdown dubbed the Million Pound Game. Toronto topped the regular season standings in the second-tier Championship with a 20-2-1 record.

York won promotion from the third-tier League 1 after a 28-2-0 regular season. Sunday marked the Knights’ first Championship action since 2013.

York came into the game already holding a win over the Wolfpack. The Knights handed Toronto 26-16 its first-ever league loss in July 2017 in its Super 8s playoff opener.

The 48-year-old McDermott won four Super League titles with Leeds Rhinos but was fired last July with the injury-ravaged club in a tailspin.

McDermott succeeded former England hooker Paul Rowley, who stepped down as Toronto coach after last season’s promotion failure. He left with a glittering 53-7-3 record at the Wolfpack helm.

Both teams showed some early-season rust on a brisk day at Bootham Crescent, which had patches of snow outside the field of play.

Toronto had 58 per cent of possession in the first half but only led 4-0 going into the break.

The Wolfpack held the early territorial edge but mistakes and the York defence kept them off the scoreboard. Fine kicking by York halfback Connor Robinson made the Toronto cause more difficult.

Toronto threatened in the eighth minute but Josh McCrone’s errant pass ended the attack near the goal-line. A dropped pass by O’Brien killed off another Wolfpack scoring chance in the 12th minute.

A try by Leutele in the 14th minute was called back for a knock-on in the scrappy buildup to the score.

York threatened after an 18th-minute Ashton Sims turnover in the Toronto half but the Wolfpack defence held firm.

Toronto kept turning up the pressure, with under-duress York conceding a string of penalties.

Adam Sidlow made it over the York goal-line in the 22nd minute but was judged to have not got the ball down. The attack fizzled out, only for a York knock-on to give Toronto a second chance.

The Wolfpack scored off the ensuing scrum with Wheeler beating a defender to touch down in the corner in the 23rd minute after a nifty offload from Chase Stanley.

Another Toronto attack died near the York goal-line with a knock-on after a swerving Andy Ackers run. York did the same on its next possession with Liam Salter knocking the ball on while sandwiched in a Toronto tackle near the Wolfpack goal-line.

York staved off another attack later in the first half with two defenders stopping Leutele just short of the goal-line.

Toronto’s Wheeler needed medical attention after getting cut around the eye. The winger returned later in the first half with a bandaged head and new jersey.

The York defence stood strong early in the second half, making several goal-line stands. But Toronto kept pressing. A forward pass by Mellor derailed another Toronto assault on the York end. Russell was bundled into touch just short of the York goal-line in the 66th minute.

The Wolfpack play next Sunday at Rochdale Hornets. 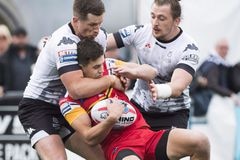 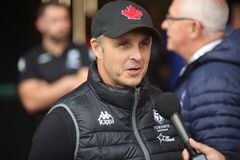 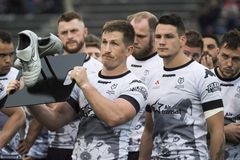