The Tour de France gets off to an unpredictable start in Nice on Saturday, and the race might not even finish if COVID-19 infections continue to rise in France.

But that hasn’t dampened the enthusiasm of Canadian-Israeli businessman Sylvan Adams, who co-owns the Israel Start-Up Nation team (ISN), which is making its Tour debut.

“I’ll be feeling great satisfaction and excitement,” Adams said from Nice. “I’m looking forward to the team presentation. I think I’ll have some goosebumps.”

Adams, 61, is a cycling enthusiast and a former Canadian and world champion at the masters level. He got involved with ISN five years ago after stepping away from his family’s property business, Montreal’s Iberville Developments, and moving to Israel.

The move involved more than a change of scenery. The son of a Holocaust survivor, Adams has always had a deep connection to Israel, and he’s dubbed himself a “self-appointed ambassador at large” for the country. “This is a new stage of my life, and I’ve dedicated it to promoting the country I moved to,” he said.

Cycling has become a natural outlet for his new passion. Thanks largely to his financial backing, ISN qualified for the Grand Tour this year, and it will compete in the three big events: the Tour de France, Giro d’Italia and Vuelta a Espana. It’s the first time an Israel-based team has made it to cycling’s top echelon, and four of ISN’s Grand Tour riders are Israelis.

It’s not clear how many races will be held this year because of the pandemic. Tour de France organizers are hoping to complete all 21 stages, and they’re regularly testing riders and staff for COVID-19. Physical-distancing measures will also keep fans at bay on the course. But there’s little organizers can do if the French government intervenes and ends the race because of a surge in infections.

Adams doesn’t expect ISN to contend for the yellow jersey or win the general classification. Instead, his goal is to eke out a stage win.

The team’s best bet is veteran rider André Greipel, 38, who has won 11 Tour de France stages in his career. ISN’s other star, Dan Martin, has won two Tour stages and came sixth over all in 2017. But he crashed in the Critérium du Dauphiné earlier this month and still has a small fracture in his lower back.

Next year things will be much different for ISN. Adams rocked the cycling world in July by signing four-time Tour de France champion Chris Froome, who will join the team in 2021. Froome signed a three-year deal that reportedly will pay him around €5-million annually, or $7.7-million.

It’s a risky move by Adams. Froome is coming back from a crash last year that left him with multiple injuries including a broken leg. He’s been dropped by Team Ineos for this year’s Tour de France, and there are questions about whether he’ll ever return to form. But Adams says he is convinced the British rider will be ready to compete for the title in 2021.

He also figures that having a superstar on the team will bolster his plan to turn Israel into a cycling powerhouse and boost the country’s image abroad. “This is a project, it’s not just a bike team,” he said.

He’s already built a velodrome in Tel Aviv and started a cycling program for children. In 2018, he raised the sport’s profile locally and internationally by bringing the opening stages of the Giro d’Italia to Israel. It was the first time the race had been held outside Europe in its 111-year history.

Adams has given his financial support to several other events that have also raised Israel’s profile. Last year, he organized an exhibition soccer match in Tel Aviv between Argentina and Uruguay, which featured superstars Lionel Messi and Luis Suarez and drew a global audience. When Israel played host to the Eurovision Song Contest in 2019, Adams boosted the show’s TV ratings by paying for Madonna to perform. He has also donated to the country’s space program, sponsored an Israeli Formula One driver and talked about bringing the world judo championships to Israel.

Critics have accused him of “sport-washing” and using high-profile events to cover up Israel’s human-rights record. ISN also ran into controversy in 2017 when Turkish cyclist Ahmet Orken, who is Muslim, quit the team after three months because of pressure from his family.

Adams offers no apologies. “When you compare [our actions] with other countries … are we sport-washing? No, we are just participating in sport,” he said. He regretted Orken’s departure and said ISN is open to riders from all cultures and faiths, including Palestinians. Canadian riders, too, are a priority, and next year Mike Woods, one of Canada’s best cyclists, will join the team.

For now, Adams just hopes the Tour will make it to the finish line on the Champs-Élysées in Paris and that ISN will prove it has arrived. “We’re bringing Israel into the sport and we’re going to turn some heads,” he said. 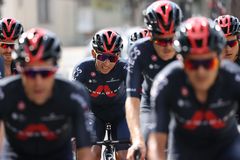 With so much on the line, Woods forecasts a hectic crash-laden Tour de France
Subscriber content
August 27, 2020 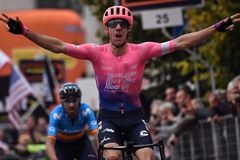