During last year’s Rogers Cup in Montreal, Denis Shapovalov camped out in the basement of Félix Auger-Aliassime’s family home.

He got out of bed each morning staring at a poster of world number one Rafael Nadal. On the day he was to play Nadal in the third round, Shapovalov texted his pal: “Take that down.”

Auger-Aliassime agreed to do so on the condition that Shapovalov win.

And that, my friends, is how legends get started.

The friendship between Shapovalov, 19, and Auger-Aliassime, who will turn 18 on Wednesday, is good for various brands. Prime among them is the sport in this country.

Tennis Canada, the Rogers Cup and a boatload of sponsors don’t need Canada’s two most telegenic men’s players to be blood brothers forever. What they need them to do is win. But the blood brothers thing would also help.

These “we came up together” narratives often end poorly in sports, and tennis in particular. It’s easy to like each other when you’re both teenage comers. It gets harder when one of the pair inevitably pulls ahead as adults.

The implosion of Eugenie Bouchard’s friendship with British player Laura Robson was the subject of a tabloid exposé published on the eve of the Canadian’s 2014 Wimbledon final. Looking deeply out of sorts, Bouchard was crushed in that match. She hasn’t looked quite right since. You can trace the beginning of her long, baffling career dip back to that moment.

That’s all to say that it can be hard for two competitive people to get along, never mind two actual competitors, and when it goes wrong, it can go very wrong.

But, thus far at least, the Shapovalov/Auger-Aliassime relationship retains a sort of high-school innocence.

After he’d beaten Nadal in this tournament last year and become a big deal overnight, the older player still devoted gleeful press time to randomly tightening the screws on his friend.

What was he going to do after the tournament?

“Probably just chill with Felix, watch some Fresh Prince of Bel-Air,” Shapovalov said. “Can you believe it? He hasn’t seen it. He has the same haircut as Will [Smith], and he hasn’t seen the show.”

Shapovalov was born three years after the The Fresh Prince of Bel-Air was cancelled. You know someone cares when their insults require this much advance research.

As juniors, Auger-Aliassime and Shapovalov were a formidable doubles team. Although neither has cultivated that side of the game since, they put the band back together on Monday.

The Canadians versus this year’s Wimbledon finalists – Novak Djokovic and Kevin Anderson – was the match you didn’t know you needed, but felt anxious to embrace once you heard about it.

The “best Rogers Cup in history” – tournament boss Karl Hale’s words – didn’t exactly leap from the gates on Monday. It wasn’t a good day for tennis, or anything else that involved physical activity while out of doors. The morning heat was crushing.

There were two early highlights – Canadian journeyman Peter Polansky winning his first-round match and a lengthy briefing from ATP officials on the new 25-second service shot clock. The briefing wasn’t exciting, but it was at least held in an air-conditioned room.

In mid-afternoon, a monsoon blew in. A nearly three-hour delay pushed the day’s (tournament’s? year’s?) hot doubles ticket from centre court to the grandstand. The move to the smaller, festival-seating venue created a Beatles-esque crush to get in.

(Starting shortly afterward, the evening’s main event – Milos Raonic against David Goffin – began in front of a stadium that was perhaps a third full. Raonic went on to win 6-3-6-4.)

Elite singles players load up on August doubles in order to pad out their full-speed practice on hardcourt ahead of the U.S. Open. They don’t expect to be any good at it.

Anderson and Djokovic had never played together before. They were both coming off a post-Wimbledon vacation. Ahead of the introductions, they were having one of those shoulder-shrugging conversations that seemed to boil down to, “I don’t know. What do you want to do?”

The crowd was struck dumb by its unexpected intimacy with some of the game’s biggest stars. Where their competitors seemed careless, Shapovalov and Auger-Aliassime were hopping in place, wired for sound. It was an altogether odd vibe – heavy, if that’s the right word.

The Canadians cared a lot more, but the mildly interested veterans won easily, 6-3, 6-2. The result doesn’t matter. Everyone but Shapovalov seemed to treat it that way.

When a flack pointed him to his postmatch interview, he said flatly, “Do I have to?”

But it wasn’t all that bad. Auger-Aliassime’s Quebec ease rubbed off on the more combustible Ontarian.

An interview that began a bit chippily veered into comedy as Shapovalov began addressing his answers to his partner: “I said before the match, let’s just have fun out there … [searching look at Auger-Aliassime] … I thought I had fun.”

While Auger-Aliassime answered questions in French, Shapovalov waved at people looking down from the top tiers of the centre court. Things were moving toward screwball comedy, and quickly.

It ended with Shapovalov offering a long explanation of why he hasn’t returned Auger-Aliassime’s favour of last year – a place to bunk down.

“I didn’t invite him,” Shapovalov said [he was kidding]. “My parents live pretty far north so it would have been quite a hike for Félix. … He made the decision to stay in a hotel pretty nearby, which I would agree is the right call.”

Auger-Aliassime assumed the far-off look of a man waiting for the dig to arrive. It didn’t. He seemed almost disappointed.

If not inspiring, it was at least an amusingly loosey-goosey way to begin the tournament proper. A bit silly, but fun.

For now, it’s another little signpost on the journey of Canada’s two best tennis friends forever.

We’ll have to wait at least a couple of years to see whether it becomes part of the legend, whose legend it’s part of, or whether there ends up being a legend at all. 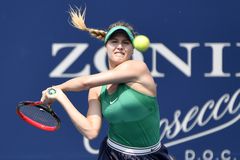 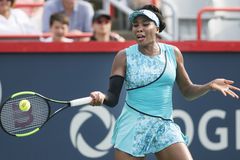 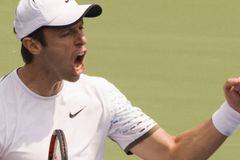