Donald Cerrone posted a booze-fuelled photo to hype his anticipated fight against Conor McGregor: A bottle of Cerrone’s preferred cheap American-style beer vs. the Irish fighter’s own whisky.

Cerrone has eschewed McGregor’s Proper No. Twelve whisky, but the winningest fighter in UFC history finally takes his shot at the hard liquor’s founder in a January fight at least five years in the making. UFC fans have buzzed for years about the potential brouhaha between McGregor, the biggest star in the sport, and the hard-living fighter better known as “Cowboy.” Once the fight was announced last week, the prospect of some four-letter-word trash talking between two of the biggest mouths in the sport was dimmed – at least for now – when McGregor went on social media and wished Cerrone’s family a happy holiday. McGregor’s friendly acknowledgment came with a steely caveat, “ See you in 20/20 with bulls-eye vision.”

“This is the fight that everyone wants to see,” Cerrone said. “I don’t even know why we have to have a media tour. This fight is going to sell itself. He’s done a great job of promoting himself and becoming Conor McGregor.”

The 170-pound bout is set to headline UFC 246 on Jan. 18 at T-Mobile Arena in Las Vegas. McGregor will fight inside the octagon for only the second time in 38 months and the first time since he was choked out by Khabib Nurmagomedov in October, 2018. Cerrone will continue to add to his legacy as MMA’s busiest fighter – he fought four times in 2019 (2-2) and holds the UFC career record for wins (23) and most finishes (16) in company history.

“I don’t know if I believe in all that ring rust stuff,” Cerrone said. “I don’t know if that’s an actual thing. He’s very talented, won two world titles, went in there with Floyd Mayweather. I don’t think a year or a couple of years off is going to matter. Who the [heck] knows? I’m coming in full guns a’blazing, man. My camp’s excited about this fight.”

His cowboy hat always on, Cerrone has grown into one of the more popular fighters in UFC with his fight anyone, any time style and who always seems up for a good time. The 36-year-old Cerrone (a +190 underdog) has done it all, except win a UFC championship. His method of cramming as many fights as he can into the shortest window has perhaps at times prevented the patience necessary needed to wait for a major title shot. Cerrone’s losses this year were to Tony Ferguson (on a 12-fight winning streak and set to fight Nurmagomedov) and Justin Gaethje (three straight wins and a regular fight of the night winner).

“I’m like my own worst enemy, for sure,” Cerrone said. “My coaches say all the time, don’t take that fight. I definitely could have had better opportunities if I was sitting and waiting. But I love it. I love chasing this crazy feeling.”

He waited out McGregor for what is expected to be the richest payday of his career. The seeds were planted when Cerrone first called out McGregor when they shared the UFC Fight Night card in January, 2015. They shared a dais in 2015 to promote coming UFC cards and promptly took aim at each other. Cerrone continued through the years to press McGregor to kick-start his comeback and fight him.

“This fight was going to happen three or four times,” Cerrone said. “Everyone would get their hopes up and then it wouldn’t go through. It was like, yeah, right, it’s not going to happen. Then the contract came sliding across, and I was like, oh [wow], here it is.”

Cerrone is ready for a “fun as hell” fight night in a matchup that might have been more enticing two or three years ago. The fight has already seemingly become more about how McGregor will look in his return than what a win would mean for Cerrone’s career. But while McGregor has been caught up in a string of legal woes during his time off, Cerrone has remained in about an endless cycle of training.

“My wrestling is far superior,” Cerrone said Monday by phone on his way to a swim workout outside his training camp home of Albuquerque, N.M. “My pace, my cardio, I plan on really putting on the pressure.”

Cerrone signed a new multifight deal as part of the McGregor bout and has no plans to slow down, no matter the outcome. He’s dabbled in acting and says he wants to put his UFC records far out of reach for the next generation of stars.

He trains at the BMF Ranch, part of another nickname that’s made him one of the more respected fighters inside the cage.

Up next, the fight of a lifetime.

“What I want to do is get all of America to back me like Ireland does him,” Cerrone said, laughing. “That’s what I want. If there’s a guy for America to stand behind, it’s the blue-collar, beer-drinking Cowboy. I think I’m the man.” 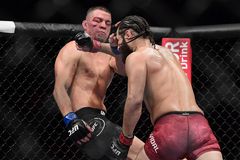 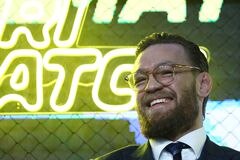 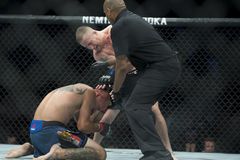