The University of Guelph says it’s “deeply concerned and troubled” by new information about Dave Scott-Thomas, including details that it says would have seen the longtime track and field coach fired more than a decade ago.

Scott-Thomas, who’s among the most successful coaches in Canadian history, was fired on Dec. 16 for unprofessional conduct.

In a statement on the school’s news website Thursday, the university said it received a complaint in 2006 from a family member of a student athlete, and while an investigation didn’t substantiate all of the allegations, it determined some misconduct had occurred and Scott-Thomas was suspended for four weeks.

The University received a complaint from another student athlete about Scott-Thomas this past fall, and again retained an independent external investigator. Scott-Thomas was placed on paid lead pending the outcome.

During the investigation, the university received new information that “made it clear that Scott-Thomas had lied repeatedly in 2006 about several significant matters,” the statement said.

Scott-Thomas was fired as a result of that new information. According to Thursday’s statement, had the university been aware in 2006 of this information, it “would have terminated its relationship with Scott-Thomas at that time.”

The university hasn’t revealed details about the alleged unprofessional conduct. Attempts to reach Scott-Thomas were not immediately successful.

Athletics Canada has launched its own investigation into Scott-Thomas’s involvement with the national organization, with which the university said it will provide any information and assistance.

Scott-Thomas led the Guelph Gryphons to 37 national titles in cross-country and track and field, and earned U Sports coach of the year in the two disciplines 35 times.

Scott-Thomas was a coach on 16 Canadian national teams, including the 2016 Rio Olympics and the 2015 and ‘17 world track and field championships. He was also the head coach of the Speed River Track and Field Club, of which numerous Olympians have been members. In a posting on its website earlier this week, the club announced it was ceasing operations.

The post said there were initiatives underway to create a new training platform to ensure programming for track and field athletes in Guelph in a “fun, safe, and caring environment.”

In its statement, the university said it was saddened to learn that student athletes had unacceptable experiences, and “we offer an apology to those who endured suffering and hardship.” 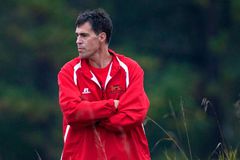