There is occasionally a special moment when a Toronto Maple Leaf gives a group interview. Even if you’ve never spent any time in these sorts of things, you would sense it.

A bunch of people are standing around a sweaty guy in spandex shorts and compression socks. They are listening quietly. A lot of them have a glazed look. A few have “scrum arm” – a muscular affliction caused by holding a microphone aloft at full reach for too long.

But then the man in spandex says something and what had been quiet turns instead to stillness. In the same way a predatory animal becomes still just before it attacks.

The player notices it, too. He’s been in Toronto a while. He knows he’s made a terrible mistake: He has said something interesting.

After Saturday’s win over Boston, that player was Auston Matthews and the thing he said – in the midst of the usual deluge of clichés and sentences beginning with the word “Obviously …” – was “a statement game.”

Matthews knew he had done wrong, but there was no fixing it. He had reignited a talking point.

That’s the other disadvantage to Leafs captain John Tavares being out with a broken finger. He isn’t speaking daily.

Tavares is the mortal enemy of talking points. He has never met one he did not end up killing.

After five minutes in Tavares’s media presence, you begin to wonder why humans talk at all. Because, when he’s doing it, the purpose certainly isn’t the orderly conveyance of useful information.

Matthews is no Tavares, and so a talking point had been allowed to live.

The same bunch of hacks ran over to coach Mike Babcock’s presser to see if he, too, was willing to admit as much under pressure – Was this a statement game?

Babcock shifted from foot to foot.

“I don’t know about statement game,” he said. “But it was more important for our team than it was for their team.”

Which is one definition of a statement game.

A better one would be a game in which Team A demoralizes Team B. Leaves it with the impression that it hasn’t just lost, but is a loser. The two things are distinct.

If you come up on the wrong end of a statement game, it nags at you. You’ll remember it later, and may flinch at the crucial moment.

If so, what happened on Saturday wasn’t a statement game. It was a status-quo game. There were no shocking gaffes or a lopsided score (it finished 4-3 in overtime). Nobody ended up angry or embittered. No points were proved or disproved.

In fact, you’d be hard-pressed to say the Leafs were the better team. They might’ve been worse. The second period viewed like an extended shooting practice for the Bruins, the goal of which was trying to avoid putting the puck in the net.

Toronto goalie Frederik Andersen was outstanding. The Bruins didn’t start their starter. It was a coin-toss at the end.

Boston may believe it won the game in terms of a stat it keeps special track of – NGR (number of goalies run).

After David Backes pancaked Andersen in the second period, he went to the penalty box smirking because the Leafs’ Martin Marincin was joining him there. No harm, lots of foul.

Even in October, the Bruins operate like the mafia – reminding you there’s nowhere they can’t get to you. April and May are when they show up at your house with a horse’s head.

All Saturday’s game proved is how deeply the Bruins have burrowed into the subconscious of the Leafs, and how embedded they remain there.

It’s October. Nothing’s big yet. The playoffs are big. Everything else is small by comparison.

Nobody in Boston’s room thought it was big. The Bruins always seem at pains to pretend they’re bothered when they lose, because they are so conditioned to the idea that they will win in the end. It’s the thing that separates talented teams (they’re all talented) from effective teams (few of them are effective).

Skill is not what separates Toronto from Boston. That mental advantage is. Boston spends so much time in Toronto’s head it ought to charge MLSE for 60 minutes of therapy after each visit.

This sort of one-sided, obsessional relationship between franchises is rare. Lots of teams hate each other. But few feel so relaxed in their psychological dominance of another that they don’t seem to care what they say or do. That’s how Boston treats Toronto.

After the game, Boston’s human paint shaker, Brad Marchand, made a point of being seen out in the hallway just down from the Leafs’ locker room. He was loudly yukking it up with pals. Still moist and a bit dishevelled in a garish, checked suit, Marchand looked like a man coming out the back door of the club after a long night out on the lash.

If the Leafs had just released a statement, Marchand apparently didn’t receive a copy of it.

This is the great challenge of the 2019-20 season. The Leafs don’t need to figure out their line combos or their defensive set-up or the penalty kill. They need to figure out how to make teams such as the Boston Bruins take them seriously. In fact, just Boston. Because if Boston starts, everyone else will follow.

Although it won, Toronto didn’t do that on Saturday night. The Leafs did rather the opposite. They proved that, for now at least, the only statements they’re making are directed at themselves. Given the way they talk about it, even they don’t seem to believe them.

Opinion
Third periods have been a pain for the Winnipeg Jets this season
Subscriber content
April 11, 2019 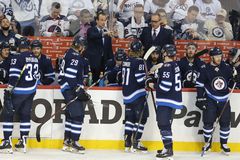 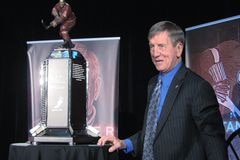 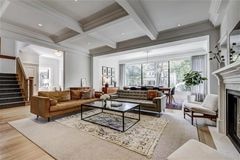