Canada coach Kingsley Jones expects a different U.S. Eagles side to show up Saturday from the one beaten 34-21 in the first leg of their Rugby World Cup qualifier last weekend in St. John’s.

So do U.S. coach Gary Gold and captain A.J. MacGinty.

“We handed them quite a few points on a platter from our own errors,” Gold said. “And that’s obviously something that is reasonably easy to fix. But more importantly there’s a style that we want to play, there’s a brand of rugby we want to play.

“There’s certain things that we wanted to execute and we didn’t feel that we executed very much of that last week. So from our point of view, that’s really important we get out there and fix it.”

The Americans will look to reverse that 13-point deficit before a home crowd at Infinity Park Stadium in Glendale, Colo., on the 20th anniversary of 9/11.

The game will be played at altitude and in hot conditions. The forecast for the 7 p.m. local time kickoff is calling for temperatures of plus 30 C.

“We have a lot of respect for the USA. and we know that they’re going to be a hell of a lot better this week. There’s no doubt about that,” Jones said. “It’s going to be a different challenge.

“It’s lovely to have the win last weekend but there’s a very strange feeling to it really. On a personal level, I haven’t celebrated that at all. It feels like halftime very much. We’ve got another big game to come. We’re in a decent position but we’ve got to forget about the aggregate, I think. We’ve got to try and go out and win the game.”

The series aggregate winner moves on to face No. 16 Uruguay in early October to determine who slots into Pool A at France 2023 with No. 2 New Zealand, No. 5 France, No. 14 Italy and Africa 1. The loser will meet No. 28 Chile to determine who progresses to the Americas 2 playoff against the loser of the Americas 1 series.

The Eagles led 14-10 last week after a first half that saw Canadians Matt Heaton and Conor Keys sent to the sin-bin. Canada reeled off 24 straight points in the second half before U.S. debutante Tavite Lopeti scored a converted a try under the posts in the 82nd minute to cut the lead to 34-21.

“We got smacked in the face. It was humbling,” said MacGinty, who was playing in his first test match since the 2019 World Cup in Japan. “And maybe we deserved it as a group. There’s a lot of new faces here that I don’t even know – and I’m still getting to know.

“I think the truest test of a man’s character is when things don’t go your way. How do you respond.”

“They deserve some credit,” Gold said of Canada. “They brought the heat, they brought the pressure. This time we have to react a little bit better to it.”

Jones is sticking with the same starting 15 for the rematch. His only change is among the replacements with veteran lock Kyle Baillie, who was unfit last week, coming in for Mason Flesch.

It’s Canada’s first unchanged starting lineup in 153 tests, dating back to 2000, according to World Rugby.

MacGinty, who plays in England for Sale Sharks, came off the bench to start the second half last week after arriving late owing to travel complications. And the U.S. starts an entirely new front row with overseas pros David Ainu’u (Toulouse, France), Kapeli Pifeleti (Saracens, England) and Joe Taufete’e (Lyon, France) moving up from the bench.

Ryan Matyas, Marcel Brache and Lopeti come into the backline.

No. 8 Cam Dolan, who failed a head injury assessment during last weekend’s game, is good to go for Saturday. That’s a boost for the Eagles whose lineout wobbled after he left. Brache replaces the injured Luke Carty at fullback.

MacGinty said he was not at his best after coming in last week.

“Just my own energy and my connections with my teammates weren’t very good,” he said. “That has been a massive lesson for me moving forward.”

While MacGinty declined to detail his travel issues getting to St. John’s, Gold said his overseas players went through an “absolutely horrendous” trip.

“I’m pretty confident that we will definitely be stronger [Saturday],” he added. “We’ll handle the situation, we’ll handle the momentum a lot better. We’ll see where that takes us.”

If the teams are tied on aggregate at the final whistle, they will play extra time of 10 minutes each way with a five-minute interval.

The Canadian men have never missed a World Cup, although they had to qualify the hard way last time out – winning a four-team repechage. The Americans have only failed to qualify once, in 1995.

The win in St. John’s moved the Canadians up one place to No. 21 in the world rankings while the Americans fell one rung to No. 17, with Uruguay replacing them.

Because of pandemic-related schedule interruptions, both teams had only played twice since the Japan World Cup with all the matches coming in July’s test window.

Last week’s victory snapped a 10-game losing streak for the Canadians. It also ended the Americans’ six-game win streak and 12-match unbeaten run (11-0-1) against the Canadians. 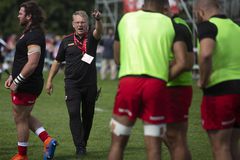 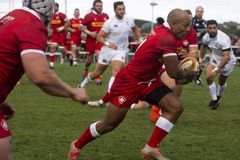