There was nothing out of the ordinary about the locker, stationed about halfway down one of the walls of the Toronto Blue Jays’ expansive clubhouse.

Vacant for the previous game, it was now filled with the bric-à-brac of the modern-day professional baseball player. A large assortment of T-shirts, sweat pants and other workout paraphernalia hung from a bar across the top.

It wasn’t even in what’s known as the Latin Quarter of the room, stationed instead between the lockers of Clay Buchholz and Luke Maile, two Americans.

An extra pair of blue cleats was sitting on one of the shelves and a baseball belt, with “Guerrero” already stencilled into the leather, hung from a hook.

Vladimir Guerrero Jr., the man of the hour and the future, sat on a stool in front of his new clubhouse digs, pretending not to notice the many members of the news media, who were captivated by his every move.

The 20-year-old, who made his major-league debut at Rogers Centre on Friday night, has created a sensation rarely witnessed in Toronto. The Blue Jays are hoping that this barrel-chested youngster with the dyed-blond dreadlocks and the easy, wide smile can live up to the incredible hype that has followed him onto the big-league stage.

Randal Grichuk of the Blue Jays, a relative veteran with six big-league seasons under his belt, said he’s never seen such a fuss over a player. “Never heard or seen this much hype. I’m excited to see him play.”

Forget that the Oakland Athletics were providing the opposition. Didn’t matter on this night. This was all Guerrero, all the time.

When he first walked onto the field to warm up before the game, there was an audible gasp from the fans near the Blue Jays’ dugout who had showed up early to witness the historic event. As he trooped into left field to begin soft-toss, every moment was recorded.

When he stepped into the batter’s box, every eye was glued on the kid whose prodigious swing has terrorized minor-league pitchers the past two years as his persona and legend started to grow.

Guerrero’s batting practice was even streamed live on television, and among the interested observers watching intently from behind the batting cage was Vladimir Guerrero Sr., the proud father who first brought baseball recognition to the family.

The elder Guerrero blazed his way through a great 16-year major-league career, which led to his enshrinement into the Baseball Hall of Fame.

The first eight years were spent as a gifted hitter and strong-armed outfielder with the Expos in Montreal, where his eldest son was born.

The old man would delight in bringing his child to the Montreal ballpark to wander around in the clubhouse. It was there that his love of the game was instilled.

As a tribute to his father, Guerrero arrived at Rogers Centre on Friday outfitted in an Expos jersey with his dad’s now-famous No. 27 across the back. It is also the number that Guerrero will wear as he embarks on his own baseball journey with the Blue Jays. On Friday night, he played third base and batted fifth.

“It was more like to honour my Dad,” Guerrero said before the game, speaking through a translator, about his decision to wear an Expos jersey. “I was the kid that was running around with my dad in the clubhouse in Montreal. And I just wanted to bring that back today.”

And the moment wasn’t lost on the elder Guerrero, who could not wipe a broad smile from his face as his son lifted batting-practice homers several feet away.

“The fact I played in Montreal, and now seeing my boy wearing that jersey and now putting the Blue Jays jersey on in Toronto, I’m just so happy,” he said.

Certainly, the Rogers Centre crowd appreciated the debut, too. When Oakland’s Chad Pinder hit a weak foul down the third-base line in the top of the second inning, the crowd gave Guerrero a hearty cheer when he handled the ball and threw it into the stands for good measure. In the bottom of the inning, Guerrero led off for his first at-bat and ​​received a standing ovation. He then grounded out to first.

The Blue Jays said Wednesday that Guerrero, who was batting .367 with three home runs in eight games at triple-A Buffalo, would be called up to Toronto. Guerrero was sharpening his game as he recovered from an oblique injury suffered in Florida during spring training.

His climb to the big leagues has captivated fans across Canada, the United States and now into the Dominican Republic, where Guerrero was primarily raised.

“We have a Canadian-born, Dominican baseball player, son of a Hall of Famer that is coming to Canada to play for this great city and country,” gushed Ross Atkins, the Blue Jays’ general manager. “It’s such a good story and he’s so aware of it.”

The scrutiny on the game’s top prospect will be unrelenting and, some say, unfair for someone so young and unproven at the major-league level.

“I don’t think life’s fair, I don’t think anything in this game is fair,” Grichuk said. “I feel bad for him, just for a 20-year-old to have to perform like a Hall of Famer is extreme. This pressure this game normally brings is already too much for 90 per cent of the players in this league.

“But his dad was a Hall of Famer, he’s kind of been through it all seeing his dad. I bet he’s had conversations with his dad about the game. Hopefully he can just not think about it and just start to play.”

When Guerrero spoke to reporters before the game, it was standing-room only in a packed conference room across from the Blue Jays’ clubhouse. Even Maple Leafs coach Mike Babcock did not command as large a Toronto audience for his end-of-hockey-season news conference on Thursday.

Looking calm, Guerrero took his seat on the podium for his first official news conference as a Blue Jay.

The first thing he did was make an opening statement, thanking God, his family, his people back in the Dominican Republic and lastly the Blue Jays for the opportunity “to play the best baseball in the world.”

To play or not to play? Vladimir Guerrero Jr. and the quandary of promoting young stars
April 26, 2019 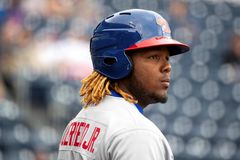 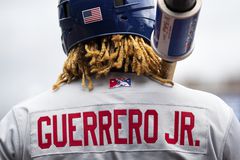 At long last, Vladimir Guerrero Jr. is set to make his majors debut with the Blue Jays
April 24, 2019 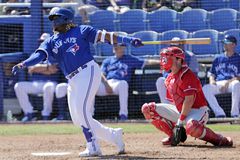