Byron Buxton’s fly ball was about as routine as the Minnesota Twins player ever hits.

And as the cowhide nestled into the glove of Toronto Blue Jays left fielder Billy McKinney in the third inning of Wednesday night’s game, it elicited a rather caustic round of applause by many of the jaded observers at Rogers Centre.

It was just the second out of the inning, but the Twins had already scored four runs in the inning, to make the score 7-0, and this affair had turned ugly, and fast.

The Blue Jays are heavily committed to their 2019 rebuild and trying to sell hope – not to mention tickets – on how bright the future will be.

Until the turnaround, however, you can expect plenty of stinkers along the lines of this monotonous affair, in which the pitching was suspect and the hitting almost non-existent.

The result was a 9-1 Minnesota rout as the Twins (23-12) swept the three-game set over the reeling Blue Jays (15-22), who have dropped five in a row and eight of their past nine.

The meek fashion in which the Blue Jays surrendered to the Twins in the series was not resting lightly with Charlie Montoyo, the normally eternally-optimistic rookie manager who put the up in upbeat.

Unless you were a Twins fans, there was little to recommend Wednesday night’s game, other than perhaps McKinney’s second home run of the season.

It came in the fifth inning and also represented Toronto’s first hit on the night. The Twins were already leading 7-0 at that point. (They would up out-hitting Toronto by an 18-2 margin.)

The paying customers didn’t even have the opportunity to see top prospect Vladimir Guerrero Jr. in action, because he was given the night off.

The Twins continue to flex their hitting muscle, with four home runs in the game – eight in the series – from Jorge Polanco, C.J. Cron, Jonathan Schoop and Eddie Rosario, who accounted for three of the Minnesota runs.

Two of the long balls were surrendered by Trent Thornton, the beleaguered Toronto starter, who left the game shell-shocked after just two-plus innings, having surrendered five of the Minnesota runs off seven hits.

And so much for hitter’s meetings.

After the players got together before Tuesday’s game to discuss hitting strategies, the team responded with a tepid six-hit effort in a 3-0 loss that night.

They followed that up with Wednesday’s lame effort against Twins starter Kyle Gibson, who fanned 11 Blue Jays in six innings, a career high.

Toronto finished with 13 whiffs, the 21st time in 37 games this season that it has recorded double-digit in strikeouts.

Mounting a consistent hitting attack has plagued the Blue Jays all season.

Toronto entered last night’s game with a collective batting average of .225, the second-worst mark in the American League.

The Blue Jays can find some solace that Cleveland, which has the worst mark with a team batting average of .212, have a winning record and trail only the Twins in the AL Central standing.

Toronto was held off the scoreboard in each of the first two games against the Twins and have been shut out four times through their first 36 games.

Toronto also had five players on the 25-man roster entering Wednesday’s game with sub-.200 batting averages, including Socrates Brito who got the start in right field while batting a minuscule .083. He struck out three times, lowering his average to .077.

Teoscar Hernandez is another who is struggling mightily in the batter’s box for Toronto. A 22-homer campaign under his belt from a year ago when he hit .239, the left fielder is hitting just .195 this season with just two dingers to his credit.

Montoyo said he is certain Hernandez, who was not in Wednesday’s starting lineup, will come around eventually with the bat. If not, he stands to lose his job in the lineup, just like any other player who does not start to produce.

“That’s for anybody hitting .200,” Montoyo said as ominously as he ever gets. “By the time it comes, May or June, there’s other people fighting for the same job.”

Thornton was coming off his best start of the season, tossing seven innings of one-hit ball on Friday in Texas, but he was in tough against the Twins.

Minnesota opened the scoring in the first inning on a sacrifice fly by Rosario and then struck for two more in the second on a two-run home run by Polanco, who enjoyed a five-hit evening.

The Twins piled it on in the third with two more home runs, both two-run jobs – the first by Cron that spelled the end of an inglorious night by Thornton.

Sam Gaviglio came on in relief and he promptly surrendered two more hits, the second a two-run smash by Scoop that brought the score to 7-0.

No support for Sanchez as Twins blank Blue Jays for second straight game
May 7, 2019 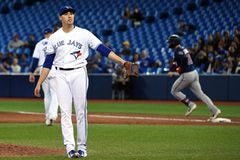 Blues Jays out of sync in loss against the Twins
May 6, 2019 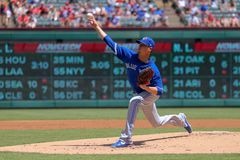 Rangers crush Blue Jays thanks to stellar efforts from Odor and Cabrera
May 5, 2019