As Colby Cave lay near death last Saturday, a nurse in the intensive-care unit at Sunnybrook Health Sciences Centre in Toronto squeezed his hand three times. The health care worker had learned from the hockey player’s wife that it was something he did each night.

The last time the 25-year-old held Emily Cave’s hand was April 6. The following morning, she couldn’t wake him. Rushed to one hospital and then airlifted to another, he had brain surgery. Five days later, as Emily watched through a window, he died from complications related to a rare, congenital colloid cyst.

“I can’t thank the nurse enough for what she did,” Emily says. “Even though I couldn’t be with Colby when he passed away, she made me feel I was.”

Emily never imagined that restrictions because of COVID-19 would keep them separated at such a tragic moment. She didn’t expect to become a widow before their first anniversary. They married last summer at a winery in Niagara-on-the-Lake, Ont. During the ceremony, the Edmonton Oilers centre broke down as he recited his vows.

“You take my breath away,” Colby told her. “You are everything I could imagine in a wife and more. Six years ago, I laid eyes on you for the first time. I remember thinking, ‘This is what perfection looks like.’”

They connected through social media and it took two years to convince her to meet in person. They had little in common. He was a Saskatchewan farm boy and aspiring hockey player. She was from Barrie, Ont., and knew nothing about, and had no interest in, hockey.

“I was skeptical,” Emily says.

He was playing for the Providence Bruins of the AHL in 2015 when she visited him for the first time.

“He was waiting at the arrivals area at the airport, and I walked right past him,” she says. “I was so nervous, I didn’t recognize him."

He ran after Emily, shouting. When he caught up with her, he gave her a kiss.

After she returned home a few days later, her parents and friends expected an amusing disaster story.

Colby Cave grew up on a cattle ranch near Battleford, Sask. He was in the drama club in elementary school and was good at baseball and hockey as a kid. He focused on the latter as he grew older, ended up playing two years with the Midget AAA Battleford Stars and four seasons with Swift Current of the WHL.

He was the Broncos captain the last two years and expected to be selected in the 2015 NHL draft. His family threw a party, then watched, heartbroken, as he went unchosen.

A few months later, he signed with the Boston Bruins, who intended to send him to the East Coast Hockey League, the level below the AHL. Cave refused to go, and ended up earning a roster spot with Providence. He spent parts of four seasons playing for the Bruins’ Rhode Island farm team and made it into 23 games in the NHL.

After he was waived by Boston in January of 2019, the Oilers quickly signed him. He appeared in 44 games and scored once this season, a spectacular goal in a 2-1 victory in Pittsburgh over the Penguins.

Teammates respected him because he was a tireless worker who squeezed every ounce out of his abilities. He wasn’t skilled like Connor McDavid, but was good at faceoffs and battled fiercely along the boards.

“He earned every opportunity he was given," says his agent, Jason Davidson. "Everybody should take a page out of Colby Cave’s book.”

Colby and Emily were a couple for 5 1/2 years. On June 16, 2018, he proposed to her on a sunset walk beside Jackfish Lake in Cochin, Sask. They married last summer on a rainy, cold day. The clouds parted shortly before their vows.

He complained about a headache in the days before he became ill but there was no sign anything was seriously wrong. Initially, doctors believed he had a brain bleed. During surgery, they found liquid had leaked from the cyst and caused pressure within his skull.

The cyst was removed and he was placed in a medically induced coma. He never regained consciousness.

His death shocked the hockey world. Everyone from Wayne Gretzky, to McDavid, to NHL commissioner Gary Bettman eulogized Colby Cave on social media.

Cave’s parents, Al and Jennifer, and sister Taylor flew, from Saskatchewan to Toronto when they learned he was in critical condition. They returned home, disconsolate, on Monday.

Davidson met their plane in Saskatoon.

“We hugged and cried,” he says.

He drove ahead of them on Highway 16 between Saskatoon and Battleford, about 90 minutes to the northwest. As they neared home, thousands of people stood beside their cars at the side of the road. Many were dressed in hockey jerseys. Some held hockey sticks. Others waved signs.

Everybody should take a page out of Colby Cave’s book

“What happened was heartbreaking and heartwarming and everything in-between," Eric Gryba says. The former defenceman for the Oilers came from his acreage near Saskatoon and joined the crowd at the roadside.

“It is really easy to fall in love with his story,” says Gryba, who trained with Cave in summer. "Nothing was ever given to him. He was just a salt-of-the-earth, hard-working, honest Saskatchewan kid.”

Over the final 16 kilometres, fire trucks escorted the family. Cars were parked beside Highway 16 the entire way.

“It was hugely overwhelming,” says Kevin Russell, a Battleford town councillor and volunteer firefighter who rode in one of the two hook-and-ladder trucks. "I had goosebumps the whole time.”

Emily remained in Barrie while the Cave family returned to Saskatchewan. She watched the procession on FaceTime.

“I had mixed emotions because I wasn’t there to see it, but I’m really grateful," she says. "I know he was loved in his own community.”

Emily remains at her parents’ in Barrie, where she is left with the sad task of tying up loose ends. A parade of cars drove past her folks’ house on Thursday to offer their respects.

Earlier in the week, the Cave family and the Oilers established a Colby Cave Memorial Fund to help carry on his legacy. Proceeds will go toward community programs with an emphasis on mental-health initiatives and to provide access to sports to underprivileged children.

“I look forward to being in Edmonton and to be part of the hockey community and to feel Colby there,” Emily says. “I am thankful for being given a purpose and keeping him alive. Colby would be so humbled.”

Now, confused, Chester lays on Colby’s side of the bed at night.

Emily wanted to donate Colby’s organs, but was unable because of the COVID-19 pandemic. She knows he would have wanted his brain donated to science as well. Under the circumstances, that, too, is impossible.

It may be months before a memorial service is held.

“It is hard to grieve when you have to wait,” she says. “I am praying for an end to this.”

She misses him terribly.

“He could make me laugh or be positive in any situation,” Emily says. “With him, the glass was always half-full. He was selflessly caring. He would grab my hand, put on some music, smile and slow dance with me in the kitchen.”

With him, the glass was always half-full. He was selflessly caring

Early in their relationship, they lived apart. He messaged her each morning before she woke up. She had a message waiting for him when he was done practice.

“I would tell him, ‘You are going to make it to the NHL one day,’” she says. “I told him he was going to make a great husband and a great dad.”

“We weren’t allowed to see him until he passed,” she says.

Once that happened, she climbed into his hospital bed and hugged him one last time. 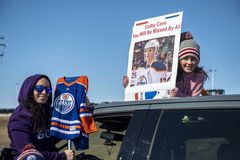