At this point, you will certainly have heard about the exemplary tennis work of Canada’s most popular citizen, Bianca Andreescu.

However, it’s possible you have yet to see her do it.

Andreescu’s win on Sunday at the BNP Paribas Open wasn’t televised, as such. Though both TSN and Sportsnet own a parcel of tennis broadcast rights, neither has the Women’s Tennis Association’s non-major events.

Those are owned in Canada by sports video-streaming service, DAZN (pronounced “Da Zone,” a name so stupid it makes me feel as if I need to throw up a ‘hang loose’ hand gesture every time it is said aloud).

DAZN is a deep-pocketed English outfit that has spent the past few years hoovering up rights to primary leagues in secondary markets (i.e. the NFL in Italy, the NHL in Austria, etc.).

It didn’t take P.T. Barnum to figure out that Andreescu’s sudden emergence as a national Heritage Minute turned those WTA rights into Canadian marketing gold. DAZN showed the entirety of the women’s final for free on Twitter.

Simultaneously, many people were on the same platform loudly complaining that they couldn’t watch the match.

The majority of the animus fell on TSN because that network was permitted to show the men’s final (it has the ATP rights). It created the false impression it had chosen not to air the women’s.

Asked to comment about the affair on Tuesday, TSN issued a boilerplate statement through a spokesperson. It noted that TSN owns the rights to both draws of all Grand Slams and said, “we look forward to following Bianca Andreescu at the upcoming French Open.”

However sensible, I can imagine TSN trying that out last Sunday and being shouted down by Canada. The general rage was largely impermeable to sense.

This general rage proved largely impermeable to reason. I took this as a positive sign in the grand scheme of things. Yemen – dealing with a gruesome civil war; Canada – dealing with an unacceptable lack of professional tennis.

Food Network cannot call up HBO and say, “We’ve heard a lot of great things about Game of Thrones. Do you mind if we get in on that tomorrow?’

But people seemed to expect a version of that to happen in this case. Just because.

It speaks to the way the digital world has corrupted our understanding of supply and demand. Information may or may not want to be free, but the under-30 set certainly expects it to be.

Every time there’s a Champions League game week, I predictably get a half-dozen e-mails from people asking why they can no longer find the Champions League on TV. The games used to be on TSN.

I reply with what has become a form letter (“You should ask John Doyle. He loves that.”). It goes on to explain that those rights are now owned in this country by DAZN. A few correspondents invariably write back to express shock and resentment. A few ask if DAZN charges a fee.

No, my friends, it’s an eccentric philanthropic organization that believes our problems can be solved by a 24-hour-a-day deluge of the World Championship of Ping-Pong. If people are watching the table tennis, they’ll be too busy to shoot each other.

The general theme is ‘More money? For sports?!’ As though sports were electricity, and we all had a right to expect them piped into our homes direct from Ottawa.

One does sympathize, up to a point.

There was a magical time in this country when all the sports were readily available to each member of the polity, like a natural resource.

And by “all the sports,” I mean local NHL hockey on Saturdays.

I don’t think I watched a live televised European soccer match until I was past the age of majority. I spent a good chunk of my early childhood obsessing about pro wrestling leagues I knew only through magazines. The NBA? Are you kidding me?

None of this was on Canadian TV.

The specialty networks opened that window on the world, which is why they aren’t totally blameless here. They created the expectation. Now that there are other players in the market, they are no longer able to completely fulfill it.

So aside from the three remaining majors, no Andreescu for you without an added fee. By next year, no Premier League (you guessed it – DAZN). After that, who knows?

This isn’t meant to be a lecture on where this is all headed. If I knew, I wouldn’t be telling you. I’d be on the phone with my (as yet imaginary) broker.

Instead, it’s meant to be a lecture about capitalism. It’s a system in which trade is controlled by the private sector rather than the state. (I borrowed that wording from Oxford, which is in turn the definition of Communism).

That’s the end of the lecture.

None of us has the right to watch anything on TV, even something as lovely as an 18-year-old Canadian nobody becoming a global somebody over the course of a few hours. That you do not is intrinsic to the fact that Andreescu was paid a million-buck prize to do it. If you had that right, she’d have been playing for well wishes and high-fives.

You do have the right to think that you are paying too much for something that does not meet your needs – in this case, cable. If you think you can live without the late game and an endless smorgasbord of CSI spinoffs, then you know what to do.

If you cannot, get used to this. It’s going to get worse. Wait until FAANG (Facebook, Apple, Amazon, Netflix and Google) gets truly stuck in.

Three things will happen: more fragmenting of the landscape, more discrete costs to be paid in order to cobble together all your sports viewing desires; and DAZN will be forced to step back and say, “So that’s how you do a nickname.”

There is another option. That we get off this hamster wheel and stop feeling the need to see everything. Or in its totality. Or in real time. Maybe we can just appreciate the thing because it happened rather than because we were there to see it.

Everything else has a ‘slow approach’ these days. Maybe it’s time for sports to get one.

Bianca Andreescu ‘getting more and more confident’ playing against the world’s best
March 19, 2019 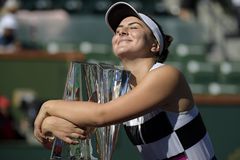 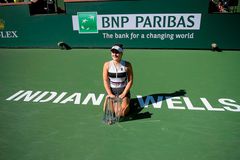 Bianca Andreescu leaps to No. 24 in WTA rankings after winning at Indian Wells
March 18, 2019 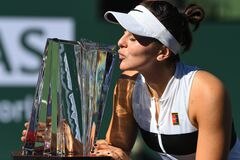