Until he hears otherwise, Dwane Casey remains the coach of the Toronto Raptors.

The team did not make any leadership changes on Wednesday as Casey and Raptors president Masai Ujiri held their season-ending news conferences two days after their team was ousted from the playoffs by LeBron James and the Cleveland Cavaliers for a third successive year.

Yet it remains unclear whether a change could still be coming.

“Well, nobody’s told me any differently. Until they do, I’m still here, fighting, scratching, meeting with players, and that’s all I can do,” Casey said. “Nobody’s changed my key locks. The doors still open.”

Cathal Kelly: Only in Toronto would the NBA’s coach of the year have to wonder about his job

Ujiri said he has met with Casey, but he declined to say whether the coach, who took the Raptors to a franchise-record 59 wins this season, will keep his job. The Raps president said his evaluation of the year is continuing.

“Coach Casey has been unbelievable for our organization and I treat it the same exact way that we’ve done every year, including the years that we’ve done well – to go back and look at everything,” Ujiri said. “I met with Casey for two hours this morning, same thing. I’m meeting with him, the staff, and we go through every single thing. It’s just our routine. It’s my responsibility as a leader to do that and we’ll go from there.”

Casey has the most coaching wins in Raptors’ history and is the fourth-longest-tenured in the league. In this, his seventh season as Raptors coach, he implemented a new offensive system without a major roster change, oversaw arguably the NBA’s best bench, coached in the all-star game and led the Raptors to the top playoff seed in the Eastern Conference for the first time in franchise history.

While speculation was swirling over his coaching fate Wednesday, Casey was chosen coach of the year by the National Basketball Coaches Association – an award voted upon by his coaching peers. He’s also one of the front-runners for NBA coach of the year, which will be announced in late June.

Both Casey and Ujiri were disappointed the Raptors were swept in the second round of the postseason, and pledged an unswerving devotion to achieving a championship.

“If they want us to break this up and start over, you might get fined for using this word ‘tanking’, but no, we’re not doing that here,” Ujiri said.

Ujiri said one part of his info-gathering will be to study why the Raptors were able to respond well after a couple of losses to the Washington Wizards in the first round of the playoffs, but were not able to bounce back in the second round against the Cavs.

Ujiri harked back to a controversial play in Game 1 against Cleveland – when Kevin Love elbowed DeMar DeRozan in the face late in the game and was given an offensive foul for a play that officials refused to review. The next day the NBA upgraded it to a Flagrant 1, which if properly assessed at the time would have given the Raptors free throws and the ball, and could have swung the outcome of a game the Cavs went on to win in overtime.

He wondered if the Raptors had won that game how differently the series might have turned out.

“We’ve come to a point in this league where we deserved for us to go look at that play. So that might not be the reason [for the loss],” Ujiri said. “We missed a hundred layups, we had 400 turnovers. But all I’m saying is the margin of error is this small and that’s the playoffs.”

Although very aware that the head coach is often the one to take the fall for such playoff failures, Casey went about business this week, having exit conversations with players and discussing their off-season steps for improvement.

“We expected more, I expected more. And we talked about all the things they wanna do this summer to get better, to be motivated to come back next year and get over the hurdle, and to continue to improve,” Casey said. “I know 59 games is a lot of games and where we ranked defensively and offensively. There’s still another level we can get to.”

Opinion
Only in Toronto would the NBA’s coach of the year have to wonder about his job
May 9, 2018 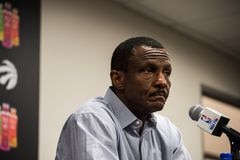 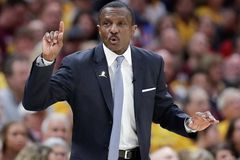 Reeling from a clean sweep, Raptors reach for answers on clean-out day
May 8, 2018 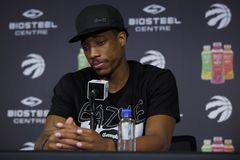