Immediately after any huge hit in the NHL these days, the expected reaction is shock.

How could one person do this to another, in a sport designed for brutality, at a pivotal moment in an important game, with emotions running high? It’s inconceivable.

The progression from shock has regular beats. Shocked quickly becomes appalled, followed by enraged. The furious send thoughts and prayers to the guy who was hit. They thirst for justice for the hittee. Eventually, they rail about the lack thereof from the NHL’s chicken-headed disciplinary apparatus. Then everyone resumes watching hockey, in the panting expectation of the next skull crusher.

Gradually, the NHL is becoming less a hockey league and more a running commentary on bad hits and their aftermath.

This morality play repeats every 20 game nights or so, and at maybe twice that rate in the playoffs. You can chart your way through a season by its bell-ringing signposts.

Big goals? Sweet dekes? Impossible saves? Sure, those are great. But nothing gets hockey talking these days like a sneaky, full-speed elbow to the head.

The most recent episode of this morality play involves the Winnipeg Jets’ Mark Scheifele. He plays the villain, the only role that matters in these things.

In fair Winnipeg, where we lay our scene, it’s the final seconds of cross-Canada Game 1. Montreal Canadien Jake Evans is chasing the puck into the Winnipeg zone. The net is empty. The puck caroms off the end boards and slides behind the net. Evans rounds it and begins to wrap the puck in.

Scheifele is coming in hot. After seeing a dozen replays, it’s pretty clear he has no chance to stop Evans from shooting. But it may not have looked that way to him as he began his bombing run. There is a moment where you can see Scheifele commit.

Evans is trying to look the puck into the net as the Jet slams into him. Scheifele’s skates leave the ice and he follows through like he’s flipping a tractor tire. It is a vicious hit.

Evans is knocked out. Two scrums form immediately – one on the ice, the other online.

The minute before this happened, the NHL’s main story was: “‘[Incoherent screaming]’, Leafs’ fans say’.” That’s over now. Hockey has something new to yell about.

Scheifele is famously one of the game’s good guys. His heel turn gives the story added pathos.

He’s also Winnipeg’s best player. On Thursday, Scheifele was suspended for four games. So there is the promise of rough justice – all of us watching the Sportsnet camera watching Scheifele watch his team lose.

Equally, there is hope for a travesty – the Jets winning anyway, eventually going on to a Cup final, Scheifele scoring the OT winner.

Either way, it works from a dramatic perspective.

Evans was reportedly recovering at the team hotel after the game, injured, but not catastrophically so. That makes this a coup from the Montreal perspective. It just took its opponent’s queen off the board in Game 1. That’s two series in a row that’s happened with the Canadiens, both times via gruesome collisions.

In a weird displacement, it’s the internet that wants (administrative) blood after this sort of thing happens. The players – the only people actually affected by any of this – are more circumspect.

But the closest any of them would come to calls for revenge was Canadiens’ defenceman Joel Edmundson: “If he gets back in the series, we’re going to make [Scheifele’s] life miserable.”

Except Edmundson bookended his threat with assurances that the league is “going to take care of it.”

So, really, none of the hockey people involved in this situation are shocked or appalled. They’re too busy working for a living.

If the league wanted the sort of hit Scheifele laid on Evans eliminated from hockey, that is easily done. Forget about a six- or eight-game suspension. Suspend him for 40. Or suspend him for the same number of games Evans misses plus 10 more. Fine teams a million bucks every time one of their players takes a match penalty.

If the players wanted premeditated, teed-up, blindside hits to become a thing of the past, they could do that, too. It doesn’t require tit-for-tat violence. All that’s needed is a little social torture. If every player who did this sort of thing were shunned by his peers – in the same way he might be for cold-cocking a teammate in practice – it would stop.

No one has more power in this scenario than the same fans who are up on the internet being disgusted by hockey. If everyone stopped yelling about hockey, paying for hockey on cable, buying tickets to hockey, the on-ice behaviour would slip into line with their expectations.

But nobody wants that. Not the league, not the players and not the people who pay to watch.

Nobody wants to see anyone maimed. That would make them complicit in a maiming. But they do want to see the risk of maiming. Maybe a little maiming-lite. They want to walk the vicarious line between something unseemly and something actively grotesque.

Then they want the catharsis of feeling rage that the grotesque was so close to occurring, on their screens, practically in their living rooms, in 2021, when we thought we were better than this.

That is neither progress nor decline. That’s just how businesses adapt to the changing tastes of their customers. 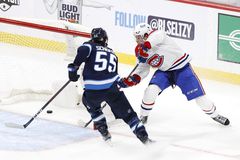