The Winnipeg Jets knew they were in deep, trailing the St. Louis Blues 2-0 in the best-of-seven opening-round playoff with Game 3 to be played in hostile territory.

Only four teams in NHL history have rallied from 3-0 down to win a series and the Jets certainly did not want to tempt fate by falling down that rabbit hole.

With their season decidedly on the line, the Jets displayed far better jump than they had previously shown and clawed their way back into the series, dropping the Blues 6-3 at Enterprise Center on Sunday night.

The Jets still trail their Western Conference series 2-1 with Game 4 slated to be played here on Tuesday night.

Kevin Hayes, Patrik Laine, Kyle Connor (with two), Brandon Tanev and Dustin Byfuglien scored for the Jets, who have at the very least ensured that the series will return to Winnipeg for one more contest.

The Jets erupted for three goals in four minutes in the second period, which turned a 1-0 St. Louis lead into a 3-1 Winnipeg advantage heading into the third.

There, Tarasenko scored at the 1:51 mark on the power play to cut the score to 3-2 to raise the hopes of a restless capacity gathering.

But less than three minutes later, Tanev crushed those soaring spirits, converting a slick backhand feed from Andrew Copp past rookie St. Louis netminder Jordan Binnington, who was anything but airtight on this night.

Byfuglien then made it a no-doubter when his shot from behind the Blues end line deflected into the net off Binnington’s mask to make it an insurmountable three-goal Winnipeg lead.

The burly Winnipeg defenceman said there was never any seed of doubt that the Jets would be able to bounce back.

“The last few games we, as a group, didn't think we were far off,” he said afterwards. “It was just minor little things.

“We knew if we just stuck to our game plan eventually it would start going our way. We did alright [Sunday], we can take some positives out of it. We’ve still got a lot of hockey left."

St. Louis coach Craig Berube said the Jets had his team on their heels for most of the first period and that sort of set the tone.

“We didn’t get to our game, really,” he said. “I thought in the third we pushed a little bit, got to our game a little bit more. But the first two periods, definitely not.”

Although the Enterprise Center was rocking for Sunday’s game, there was little of the crazed atmosphere outside the arena, which has become a staple for thousands of white-clad fans at the Jets’ home playoff games.

A pregame party had been organized outside on 14th Street. But near freezing and rainy weather forced it inside – and only for those who had tickets for the game.

Inside the arena, live music – from a “Blues” band, of course – was being belted out through the public-address system as the fans started to take their seats.

As Winnipeg coach Paul Maurice pointed out before the game, the series was about as close as it could get through the first two games in Winnipeg, both one-goal conclusions with the Blues on the winning end in each.

“I’m sure, if you’re them, they like where it’s at. It’s a grinder and they like it tight. We’re looking for a little step, a little edge. Where we can get ahead and be on the right side.”

Obviously, the Jets were the more desperate of the two teams and it showed in their play in the opening frame where they outplayed St. Louis by a wide margin but had nothing to show for it.

Binnington continued his strong play from the first two games, making several huge saves to keep the game on even footing.

Winnipeg’s Bryan Little and then Mathieu Perreault would attest to Binnington’s brilliance, both being stymied on stellar scoring chances from in close.

But a late power play proved beneficial for the Blues, with Perron sniping one past Winnipeg goaltender Connor Hellebuyck from the slot for a 1-0 St. Louis lead at 19:12.

Winnipeg’s continued perseverance paid off in the second period when they finally broke through for three goals and a 3-1 lead.

Hayes opened the scoring at the 4:57 mark with a shot from the point that went off the post before going in.

Just under three minutes later, Laine made a deft move in front of Binnington to create a shooting path and his aim was true for a 2-1 Winnipeg lead. The silky winger has now scored in each of the three games.

Connor then added to the lead less than a minute later on the power play when his shot from the right circle zipped past Binnington and suddenly the incessant din within the arena subsided dramatically. 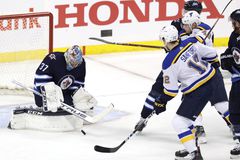 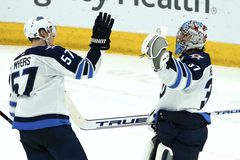